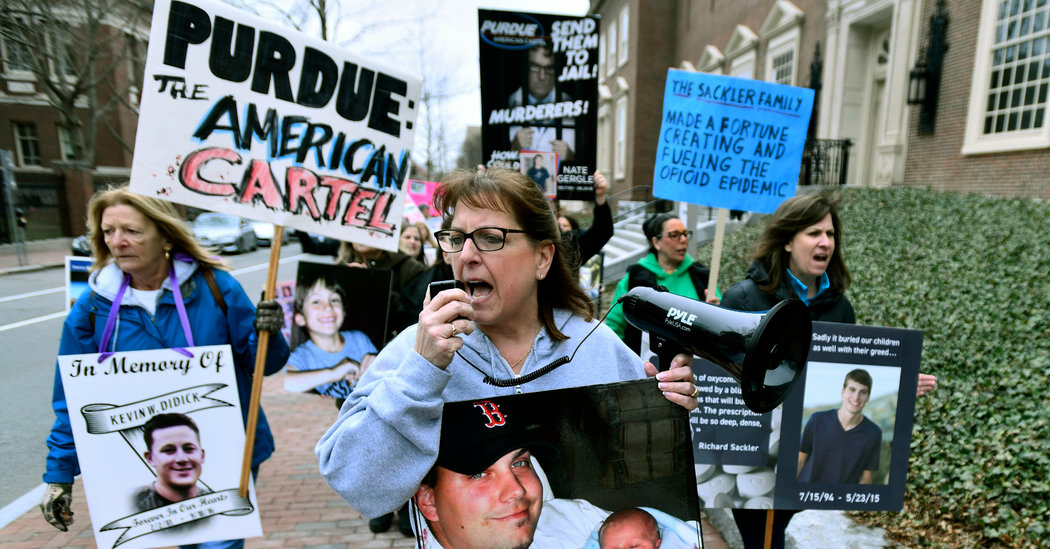 After months of negotiations and threats, Purdue Pharma has finally filed for bankruptcy. But it’s hardly a done deal.

The bankruptcy filing is part of a settlement agreement that the company and its owners negotiated with lawyers for states and thousands of local governments that have struggled for years with the opioid crisis. They support the deal because it offers guaranteed cash and an end to litigation.

But the plan has been greeted with scathing condemnation by some state attorneys general and others who assert that it allows Purdue, the maker of OxyContin, and its owners, the billionaire Sackler family, to get off cheaply and without an admission of wrongdoing.

The deal, they say, will be neither speedy enough nor sufficiently lucrative to begin to redress the harms of the opioid crisis.

Whether these states can derail the proceedings remains to be seen.

Here are some important questions about what could happen next:

How would Chapter 11 bankruptcy affect the 2,600 opioid lawsuits pending against Purdue?

If the bankruptcy is approved, those cases would be resolved.

For now, as a bankruptcy judge considers Purdue’s petition, those cases are largely suspended.

The overwhelming majority of opioid cases against Purdue have been brought by cities, counties and tribes, and they are now consolidated before a federal judge in Ohio. Those plaintiffs have agreed to the settlement deal outlined in the bankruptcy filings. Attorneys general for 24 states and five United States territories have also said they support the deal.

But the settlement must be approved by the bankruptcy judge and Purdue’s creditors.

The fate of lawsuits brought by 24 other states and the District of Columbia that have not committed to the deal is still in question. Purdue is seeking a preliminary injunction to stop those cases.

In court filings, Purdue referred to “a kaleidoscope of piecemeal litigation.” In 2019 alone, it said, the company will have spent $263 million on legal costs. It argued that its plan will end costly litigation for all parties and bring relief to the plaintiffs as swiftly as possible.

Will the Purdue bankruptcy also shield the Sacklers from litigation?

That’s the mega-billion-dollar question. The answer is not clear.

Purdue will ask for a halt to lawsuits against so-called related parties — an obvious reference to individual Sacklers who have been sued in a growing number of cases because of their past roles with Purdue.

But the Sacklers, one of America’s wealthiest dynasties, are not filing for bankruptcy; only Purdue is.

“At least on a temporary basis, the court could grant a stay for the Sacklers, because this is a messy, high-stakes case and the court needs a little time to get everyone in the same room to figure out what’s happening,” said Lindsey D. Simon, an assistant professor at the University of Georgia School of Law who teaches bankruptcy and commercial litigation. “Otherwise, there could be a risk that the settlement, which includes a $3 billion contribution from the Sacklers, will go away.”

If the bankruptcy is approved, Ms. Simon added, the Sacklers could be permanently released from lawsuits.

There are apparently no criminal charges pending against the company or individual Sacklers. Should any ever be filed, Ms. Simon said, bankruptcy would not shield them from criminal prosecution.

Do the states that oppose this deal have any recourse?

Some states that have not signed on to the deal are vowing to fight the bankruptcy proposal in court. Legal experts disagree about whether those states can prevail.

Melissa B. Jacoby, a bankruptcy law expert at the University of North Carolina at Chapel Hill, noted that these states have “plenty of grounds to argue that the company is not in financial distress.” The Purdue restructuring, she said, could be seen as “an end run rather than a legitimate use of the federal bankruptcy system.”

They may also argue that bankruptcy law itself offers a way for states to sue in their own courts.

There is a “police powers” exception to the automatic suspension of lawsuits in bankruptcy court. If a state is using that power to protect its citizens through a lawsuit against a company, often that case can continue even if the company has filed for bankruptcy. Here, for example, states could say they are suing Purdue and the Sacklers to protect public health or to guard against consumer fraud.

Attorney General Josh Stein of North Carolina, who is preparing to sue the Sacklers, said, “I allege that these people are among the most responsible for the trail of death and destruction the opioid epidemic has left in its wake.”

Similarly, various leaders of the fight against the Sacklers issued withering statements.

“We will continue to pursue Purdue and the Sacklers both in the bankruptcy court and in our state court,” said Maura Healey, the Massachusetts attorney general.

And the New York attorney general, Letitia James, whose office announced on Friday that it had evidence of about a billion dollars in undisclosed wire transfers out of Purdue by a member of the Sackler family, said that “any deal that cheats Americans out of billions of dollars, allows the Sacklers to evade responsibility, and lets this family continue peddling their drugs to the world is a bad one.”

But legal scholars say that previous rulings by the United States Court of Appeals for the Second Circuit, which oversees the federal bankruptcy court in White Plains where Purdue filed its case, could be read in a light favorable to the position that lawsuits against the Sacklers as well as the company should be halted.

The battle, Ms. Simon said, is about whether states or the federal bankruptcy courts should hear these disputes.

Will states and municipalities favoring the deal have to support Purdue in bankruptcy court?

In a statement, Herbert H. Slatery III, the attorney general of Tennessee, who supports the deal, emphasized that the settlement framework was agreed upon by a bipartisan group of 29 attorneys general and more than 2,000 cities and counties. In addition to billions of dollars in cash plus medicines to treat addiction and overdoses that the company would donate to the public under the settlement, he said, “Purdue will no longer exist,” and the Sacklers “will be out of the pharmaceutical industry forever.”

He added, “No other plan on the table has any assurance of accomplishing these things.”

The states and thousands of municipalities that have endorsed the deal could likely file supporting motions. As such, governments equally ravaged and depleted by the opioid crisis will be implicitly squaring off in bankruptcy court, speaking for and against the Purdue filing.