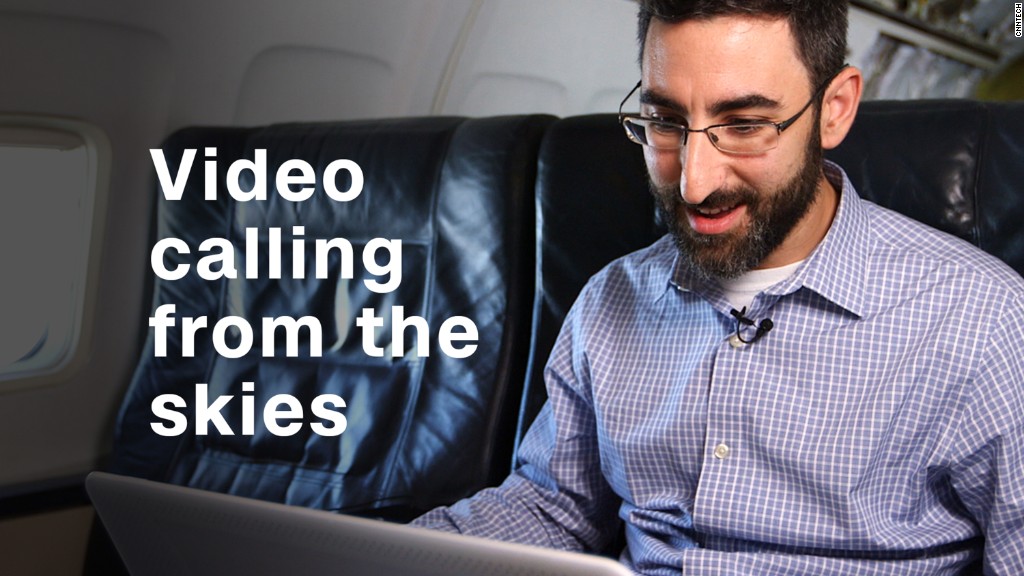 Is your phone, tablet and laptop killing those in-flight entertain screens at each seat? Not quite.

In-flight internet provider Gogo and Delta Air Lines on Tuesday announced it was unveiling a new kind of tablet that would be affixed to the seat-back. Rather than a wired, custom-designed screen, Delta would install standardized Android tablets at each seat that would wirelessly stream content from an on-board server.

That will not only reduce the weight of the system, but also opens a lot of new possibilities for airlines.

Gogo’s new product is part of a major shift in how in-flight internet is transforming how we stay entertained in the sky.

The new screens will start rolling out on the first of 75 new Bombardier C Series aircraft arriving at Delta in the spring.

Even as seats are smaller and planes more packed, your flying experience is going to be marked by improved technology. And increasingly the advancements represent a marriage between our personal devices and in-flight entertainment and connectivity.

How we use our devices on the ground is now how we expect to use them when we fly, airlines say.

“People are very accustomed to consuming multiple pieces of information at one time these days,” said Joe Kiely, Managing Director, Customer Experience & Product Development at Delta in an interview. “And having the seat back screen and having streaming…and wi-fi, which is getting faster and faster is” what “they’re really accustomed to when they’re at home.”

Delta has those individual screens on all its new planes and it spent $770 million to add them to most of its older jets. And the carrier announced Wednesday the airline was adding free texting to all its connected aircraft.

Airlines have split on the future of seat back screens. Smaller jets that don’t hop between continents aren’t getting the same electronic amenities as bigger jets. Airbus says only about 30% of its smaller single-aisle jets are delivered with personal monitors, the number is estimated to be even lower for Boeing.

Related: This plane may vastly improve flying in the U.S., if it first doesn’t start a trade war

But with more passengers coming aboard with a myriad of electronics, some airlines are questioning if the screens they provide still have a place in the sky. Nearly 80% of Americans now own a smartphone and half have a tablet, according to the Pew Research Center.

United Airlines, Alaska Airlines and Hawaiian Airlines have all steered away. Instead, phones, tablets and laptops can tap into high-speed internet or on-board streaming to deliver the same entertainment library or live TV.

And the country’s biggest carrier, American Airlines, said that its 100 new single-aisle 737 Max jets would arrive without seat back screens. The airline said Thursday it was removing them from its current 737s.

“It makes sense for American to focus on giving customers the best entertainment and fast connection options rather than installing seatback monitors that will be obsolete within a few years,” the company said in a statement.

Jonathan Norris, vice president of sales and marketing for Panasonic Avionics, which supplies about half of the world’s in-flight screens, says American’s attitude is understandable. “Your [in-flight entertainment] screen is judged by your latest iPhone or your tablet,” he said. Panasonic is developing a new generation of more easily upgradable screens that will be ready around 2020.

While airlines debate the future of those seat-back screens, the one place they aren’t going away is on long-distance flights.

Airbus says all its new long-range A350 jets and A380 superjumbos are fitted with the screens at each seat. And over the past three years about 95% of its smaller twin-aisle A330s have the same. Boeing declined to supply its figures, but a review by CNNMoney suggests its long-range jets have similarly tricked-out cabins.

The electronics ban on nine Middle Eastern airlines earlier in 2017 put the screens back in the spotlight. The ban forced travelers to check or leave behind their laptops and tablets. One airline declared: ‘Let us entertain you,’ a nod to the individual systems at each seat for movies, games and even a view outside.

Even low-cost, long-haul carriers like Norwegian Air Shuttle are putting screens at each seat on its biggest jets.

In-flight entertainment has come a long way. The first in-flight movie dates back to the 1920s, but aerial cinema took its biggest leap in the 1990s with small personal screens at each seat. Airlines started adding sluggish wi-fi in 2004, but it wasn’t until smartphones and tablets arrived a decade ago, that carriers started to think differently about aerial entertainment.

High-speed services from Gogo, Honeywell, Panasonic and ViaSat can already stream video to a device you bring aboard, but it won’t be long before airlines can enable streaming services like Hulu, HBO Now and Amazon Video directly to the seatback.

And the big names in content streaming are taking notice. Netflix on Monday said it had developed a new type of encoding to shrink the amount of bandwidth used for in-flight streaming.

Airlines are also merging on-board technology with the devices passengers have in their carry-on luggage.

Lufthansa’s app now lets you make personal playlists of music, audio books and films that are ready on the screen when you take your seat. Singapore Airlines wirelessly pairs your phone or tablet with your screen to control a movie or follow the flight’s progress.

“This is about the internet of me,” says Norris. “This is about a passenger who walks on, synchronizes their phone with the seat back…to customize their experience on board.”