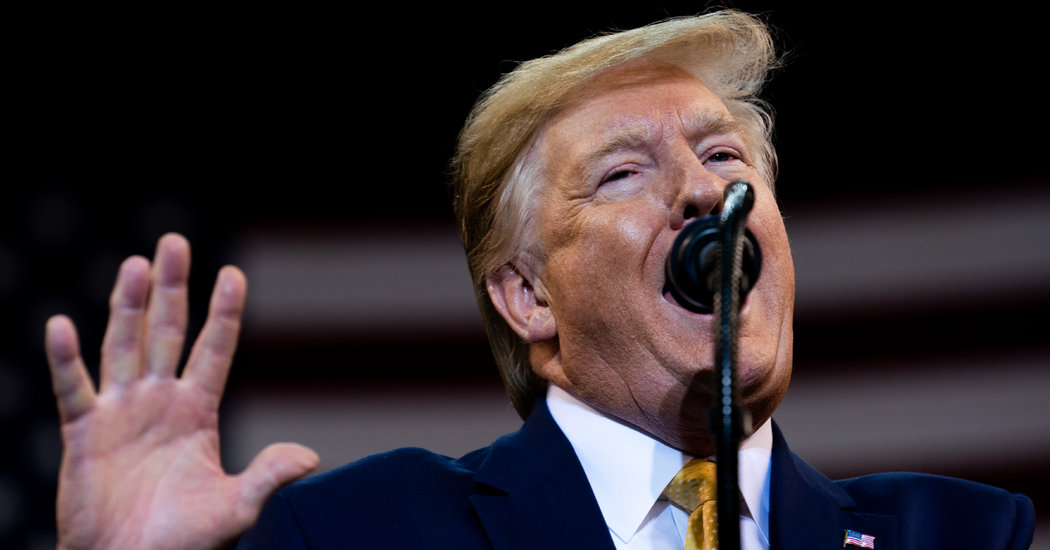 President Trump portrayed the “Phase 1” agreement he announced with China on Friday with typical fanfare, describing the pact in a tweet as “one of the biggest deals that’s been made in a long time, with China” and “by far, the greatest and biggest deal ever made for our Great Patriot Farmers in the history of our Country.”

There are reasons to be cautious about those claims. The deal appears likely to benefit American farmers by increasing Chinese purchases of agricultural goods and gives some other businesses more access to the Chinese market. But the “agreement in principle” is limited in scope and exact details have yet to be put in writing — a process that has derailed negotiations with China in the past.

American officials said Friday that they would work with China on finalizing an initial agreement in the coming weeks, with hopes of signing a deal when Mr. Trump and President Xi Jinping attend a summit of global leaders in Chile in mid-November.

Here’s what we know so far about what the agreement might contain.

What’s in the Deal

From Mr. Trump’s perspective, the centerpiece of the pact is a commitment by China to purchase between $40 billion to $50 billion of American agricultural products per year. Administration officials said that target would be reached within the second year of the pact’s enactment.

That volume would represent a huge increase over what China was purchasing before the start of the trade war. American farm exports to China peaked at around $25.5 billion in 2016, according to the American Farm Bureau, then dipped to $24.3 billion in 2017.

Since then, exports of soybeans, pork and other products have collapsed under pressure from the trade war. American farm exports to China fell to just $13.4 billion in 2018, and are on track for a similar total this year, according to the same data.

American officials have not specified which products would be purchased, or how they arrived at a $50 billion figure. But to many analysts, that level of exports seems hard to achieve. Mr. Trump himself acknowledged this on Saturday, saying in a tweet that “there is a question as to whether or not this much product can be produced.”

“Our farmers will figure it out. Thank you China!” the president added.

One factor that could sharply drive up China’s imports is its African swine fever epidemic. China has already lost about 40 percent of its hog herd to the sickness, increasing demand for foreign pork and other meats.

The $50 billion target may also include a generous estimate of how other parts of the agreement would affect sales. American officials said they had negotiated speedier food safety checks for imports into China and approvals for genetically modified products, both of which could boost trade.

Geng Shuang, a Chinese foreign ministry spokesman, confirmed at a news conference Tuesday that China would speed up its purchases of American farm goods. “What the U.S. is saying is the actual situation, which is consistent with what we know,” he said.

No New Tariffs — For Now

From China’s perspective, the biggest win is a promise by Mr. Trump to cancel an Oct. 15 tariff increase, when taxes on $250 billion of Chinese goods were set to rise to 30 percent from 25 percent.

American officials could also cancel plans to impose a 15 percent tax on another roughly $150 billion of goods in December if things go well.

But that still leaves a huge swath of tariffs intact. Since the start of the trade war, the United States has imposed tariffs on more than $360 billion of Chinese products, while China has placed tariffs on roughly $100 billion of American imports.

Trump administration officials said that China has pledged to open its markets to American financial services firms, and that banks and credit card companies would be the primary beneficiaries. But few details have been offered and many of these changes are already in the works for other countries.

Under heavy American pressure, China has announced a series of moves over the past two years to open up its banking and other financial services sectors, allowing higher levels of foreign ownership or even removing ownership caps entirely. But China is unilaterally opening up its financial services sector to businesses from all over the world, not just from the United States.

Some trade experts say the gains to American companies may be limited, pointing out that China has delayed opening its markets for so long that Chinese companies already dominate the financial sector.

The White House initially began the trade war over concerns about China’s treatment of American intellectual property, including what the administration called outright theft of technology and trade secrets.

Mr. Trump said Friday that some measures concerning intellectual property and technology transfer would be included in the “Phase 1” agreement, with additional protections included in later phases. Officials have given few details, though people briefed on the negotiations said the measures include stronger protection for copyrights and patents.

Chinese negotiators have pointed to a foreign investment law passed earlier this year as evidence that they have resolved some of the Trump administration’s concerns. That law contained assurances that China would even the playing field for foreign and domestic businesses, but it had few details. The crucial implementing regulations are not scheduled to be issued until January.

The agreement also includes new guidelines for how China manages its currency — provisions aimed at resolving American complaints that China has intentionally weakened its currency to make its exports cheaper.

People briefed on the agreement said the provisions look similar to the currency chapter in the Trump administration’s revised North American Free Trade Agreement. It also closely resembles a pledge that China gave when the Group of 20 nations’ finance ministers gathered in Shanghai in February 2016. Both texts call for countries not to devalue their currencies to achieve a trade advantage and to inform each other if they intervene by buying and selling large amounts of currency.

Some experts question whether requiring the Chinese government to disclose more data will do much to curb intervention. Beijing could respond by doing more of its intervention almost invisibly through state-owned banks, and there are some signs in Chinese data it has already begun doing so.

“The more disclosure there is of China’s formal intervention, the more China is likely to rely on shadow intervention,” said Brad W. Setser, a senior fellow at the Council on Foreign Relations and a former Obama administration Treasury official.

A big question has been whether China will stick to the promises it makes. Robert Lighthizer, Mr. Trump’s top trade negotiator, said the pact would set up “a very elaborate consultation process” with “escalation in various areas so that difficulties can be resolved.” But he added that the details were still being worked out.

American officials have emphasized that their current tariffs, and the threat of future ones, will act as an enforcement mechanism. If China violates the agreement, the Trump administration could move forward with additional tariffs on Chinese products. And if China follows through on its promises, some of Mr. Trump’s existing tariffs could be rolled back.

No agreement has yet been signed and some of it remains unwritten. Mr. Trump said Friday that the deal was “subject to getting everything papered,” but added he did not foresee a problem with that process.

But the United States and China have reached trade truces before — in Buenos Aires last December, and in Osaka, Japan in June — only to see them quickly crumble. That has left some critics hesitant.

“A deal that isn’t written down isn’t a real deal,” Senator Ron Wyden, Democrat of Oregon, said in a statement.

Longstanding concerns about Chinese economic policies that disadvantage American companies do not appear to have been addressed.

These policies, which are often called “structural issues,” include China’s generous subsidies to certain companies, the outsized role of the government in the economy and its systematic discrimination against foreign firms. In particular, the Trump administration has often criticized Beijing’s ambitious plan to dominate cutting-edge technologies like advanced microchips, artificial intelligence and electric cars, called Made in China 2025.

China has fiercely resisted any American demands that it sees as efforts to interfere with how it runs its economy. Negotiators have discussed some measures, like requiring China to disclose more information about how it subsidizes its industries, and people familiar with the talks say such talks will continue. But American officials made no mention of these issues with regard to the initial agreement.

The agreement also excludes provisions related to the manufacturing sector. And it appears to allow China to retain, for now, its high tariffs on American-made cars.

That’s notable, because nonagricultural goods — including cars, car parts and aircraft — account for both the bulk of American exports to China, as well as the very large American trade deficit with China that Mr. Trump has criticized.

Mr. Trump tweeted on Saturday that the deal would include $16 billion to $20 billion in purchases of Boeing planes, but American officials have not shared any other details.

Officials have made no mention of a point that is as crucial for American competitiveness as it is hard to resolve: China’s treatment of data.

Chinese laws block multinational companies from moving much of the data they gather on Chinese customers out of the country, meaning that many technology and retail companies must silo off their China business from the rest of their global operations. Chinese officials insist this is a matter of national security and have signaled they are unlikely to yield on this point.