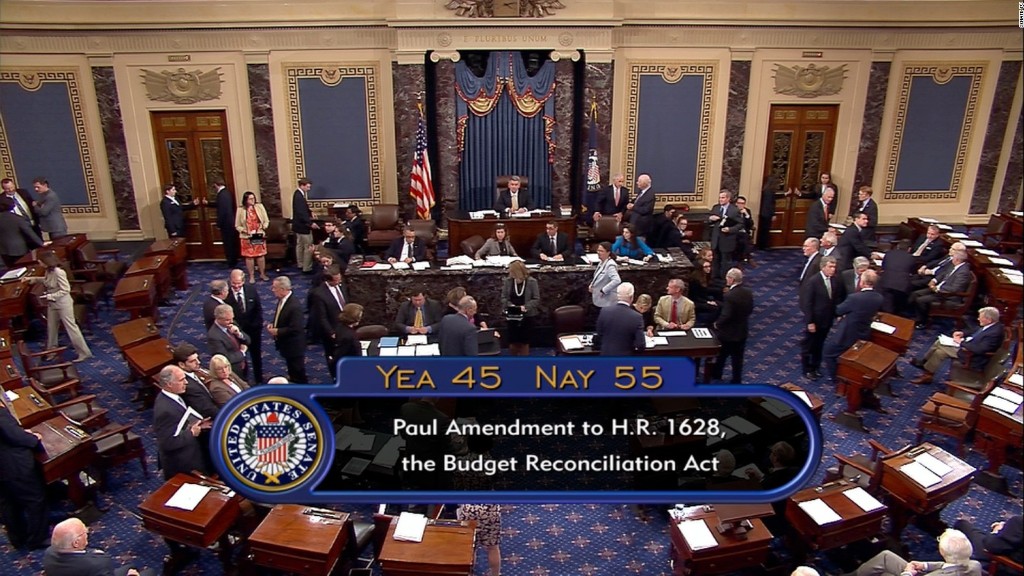 Senate Republicans failed at trying to pass a comprehensive plan to repeal and replace Obamacare.

Instead, they are now considering a slimmed-down package that repeals parts of the health care law in hopes of winning the approval of at least 50 of their members. Senators would then hammer out a final bill with the House in a conference committee.

This so-called “skinny repeal” bill, however, could wreck the individual market, said insurers, doctors, consumer advocates and health policy experts. Repealing key provisions of Obamacare without replacing them could cause insurers to flee and premiums to rise.

Repeal the individual mandate: Say goodbye to the requirement that nearly every American have insurance or pay a penalty. Republicans have long sought to get rid of the mandate, one of Obamacare’s least popular provisions.

Both the bill passed by the House and the Senate’s original repeal and replace legislation would also eliminate the individual mandate. But they each contained incentives for Americans to remain continuously insured, which is crucial for the health of the market.

The “skinny repeal” bill doesn’t, prompting the two leading insurance industry lobbying groups to warn that premiums could rise and insurers could drop out of the market if the individual mandate is not replaced.

Get rid of the employer mandate for eight years: Companies would not have to provide affordable insurance for a minimum of eight years.

Under Obamacare, employers with 50 employees or more were subject to the mandate. If they didn’t provide affordable coverage, they could face stiff penalties.

Both the House legislation and earlier Senate bill would repeal the employer mandate permanently.

Provide greater flexibility to the states through waivers: Obamacare changed the way insurers do business, banning them from discriminating against people with pre-existing conditions and requiring them to cover 10 essential health benefits, including maternity and mental health. These regulations pushed up the cost of coverage.

The House bill and Senate’s original legislation would ease the ability of states to waive several of these provisions. The House would allow states to waive Obamacare’s community rating measure, which would let insurers base premiums on enrollees’ medical histories if they let their coverage lapse, and the essential health benefits rule. The Senate limited its waivers mainly to the essential health benefits requirement.

Waiving Obamacare’s regulations is key to reducing premiums — for younger and healthier consumers, at least. They would likely be able to get cheaper policies, though they would cover less and require enrollees to pay more out of pocket for care. Older Americans and those with pre-existing conditions would likely see their premiums rise and their policies become less comprehensive.

However, the Senate parliamentarian recently ruled that the Senate’s waiver provision runs afoul of the chamber’s rules to pass a bill by a simple majority.

The “skinny repeal” bill would repeal it for three years. The House and original Senate bills would have gotten rid of it completely.

Republicans are big fans of HSAs, but they are mainly used by wealthier Americans who can afford to save for future health care bills. Both the House and original Senate bills would increase the contribution limit.

Both the House bill and the Senate’s original bill would inject $422 million into community health centers — which care for 25 million low-income patients at more than 1,400 centers — for fiscal 2017. The skinny repeal bill provides the same amount.

Here’s what the bill wouldn’t do:

Touch Medicaid: Both the bill that passed the House and the Senate’s original repeal and replace legislation called for cutbacks in federal support for Medicaid. They would wind down enhanced federal funding for Medicaid expansion and would send a fixed amount of money to states for the overall program.

Medicaid funding is at the center of the battle between conservatives and moderates in both chambers. It was among the main reasons the more comprehensive repeal bill died in the Senate.

Eliminate taxes on the wealthy and others: Republicans have been itching to shed Obamacare’s taxes on the rich, insurers, medical device manufacturers and others.

Change the federal subsidies: Under Obamacare, low- and moderate-income Americans can qualify for federal subsidies to help them pay their premiums. Also, low-income consumers can get additional subsidies that reduce their deductibles and out-of-pocket payments.

Both the House and Senate repeal bills would change the premium subsidy structure. The House bill would base payments on age, with an income cap. The original Senate repeal and replace legislation would continue to calculate subsidies on income and cost of coverage in one’s area, but it would be less generous for many folks than Obamacare’s payments.

Both chambers would eliminate the subsidies that lower deductibles and out-of-pocket costs.