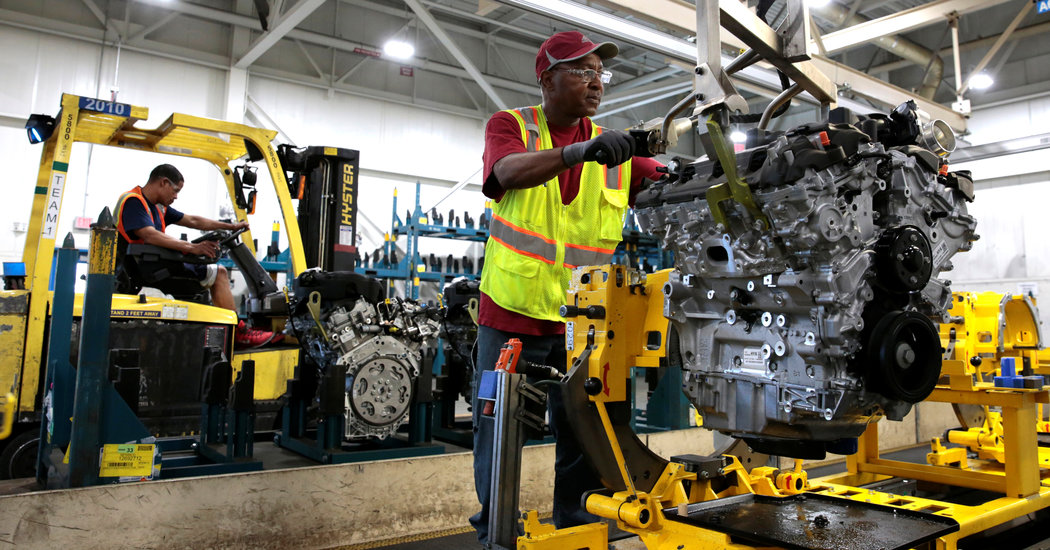 In his State of the Union address in February, President Trump said the North American trade agreement his administration had negotiated would reverse the flow of auto manufacturing jobs by ensuring “that more cars are proudly stamped with our four beautiful words: Made in the U.S.A.”

But with that deal, the United States-Mexico-Canada Agreement, now almost certain to become law, some analysts and unions are voicing skepticism that Mr. Trump will be able to make good on that grand promise.

“It’s not at all clear that there is going to be a positive effect on jobs in the auto industry,” said Mary Lovely, a senior fellow at the Peterson Institute for International Economics and a professor of economics at Syracuse University. “This is the hard lesson of economics, which is basically there’s a lot of factors here.”

The trouble, she and other experts said, is that the very provisions in Mr. Trump’s deal aimed at lifting employment could drive up the cost of making cars. That, in turn, could reduce demand and jobs. As a result, the pact’s net result on jobs could be a wash.

Those provisions include a requirement that 75 percent of the parts in a vehicle come from North America, up from the 62.5 percent required by the North American Free Trade Agreement, which the new trade agreement is revising.

The new deal would also require that 40 percent to 45 percent of a vehicle’s contents be made by workers earning at least $16 an hour, which is much more than the prevailing wage at Mexican auto factories. (Under labor agreements General Motors and other automakers recently negotiated with the United Autoworkers Union, wages at assembly plants in the United States can reach $32 an hour.)

The administration has argued that those tightened rules would spur substantial increases in domestic production and create 76,000 jobs in the United States over five years. While the deal won the endorsement of the A.F.L.-C.I.O. after the administration made changes to win the support of Democrats, other labor unions that represent workers in the auto industry have questioned the validity of the administration’s projections.

The International Association of Machinists and Aerospace Workers criticized the deal on Tuesday for doing too little to address the outsourcing of jobs, a sentiment echoed by the U.A.W. on Wednesday.

“While the final text of the agreement has not been made available for review, we already know that U.S.M.C.A. is highly unlikely to bring factories back from Mexico, as some have promised,” the U.A.W. said in a statement. The union expressed the hope that the accord would, at the least, “stop some of the bleeding.”

Ryan Connelly, a senior analyst at DuckerFrontier, a research firm, said the revised trade pact was unlikely to have a substantial effect on the sector, either positive or negative. “At its best, it will probably prevent some of the losses that you would expect anyway as the industry gets more efficient and more automated,” he said.

In March, Brian Reinbold and Yi Wen, of the Federal Reserve Bank of St. Louis, wrote that while the U.S.M.C.A. wage requirements might benefit workers in the United States, the rules could also drive up the cost of cars produced in the three countries.

“Based on our previous analysis, U.S.M.C.A. is a solution searching for a problem in regard to auto trade,” they wrote. “It also could make North American automakers less competitive in a global marketplace.”

That could be important for some automakers that export American-made cars to China and other countries. BMW has moved some production of its popular X3 sport utility vehicle to China from its plant in Spartanburg, S.C.

Researchers at the International Monetary Fund arrived at a similar conclusion to the Fed researchers.

In April, the United States International Trade Commission published a nearly 400-page report on the potential consequences of the proposed deal, finding its effects would be mixed for the automotive industry.

Rules governing wages, parts and the sourcing of steel and aluminum would create about 28,000 automotive jobs, it found. But the cost increases that would come with those rules would lead to 140,000 fewer vehicles sold.

Some analysts also said that automakers might decide to sidestep the pact altogether, opting to pay relatively low tariffs on some vehicles rather than make them in North America under the new rules.

While there’s little clear evidence that the new accord will provide the jobs boost that Mr. Trump has promised, many industry officials expressed relief that House Democrats and the Trump administration had reached an agreement, which lays the groundwork for congressional ratification of U.S.M.C.A. in the coming weeks.

Continuity and certainty are vital to the auto industry because many companies invested billions of dollars over the last 25 years in plants across the three countries assuming that tariff-free trade in North America was so firmly entrenched that no government would consider getting rid of it. Production is so integrated across the region that cars and car parts can move across Canada, the United States and Mexico multiple times during the production process.

Of course, NAFTA’s durability was called into question by Mr. Trump, who called it the “worst trade deal ever made” and threatened to unilaterally withdraw the United States from it.

“Nearly a quarter of all new vehicles sold in the U.S. are assembled in either Mexico or Canada and we’ve had decades of this supply chain based on the old NAFTA,” said Michelle Krebs, an executive analyst at Autotrader. “It’s made it really important to continue to have some kind of agreement that makes it easy to cross borders.”

G.M. expressed a similar sentiment in a statement, calling for “swift passage” of the deal and adding that “the certainty that comes from having a trade agreement like U.S.M.C.A. in place allows our company to invest and source with confidence.”