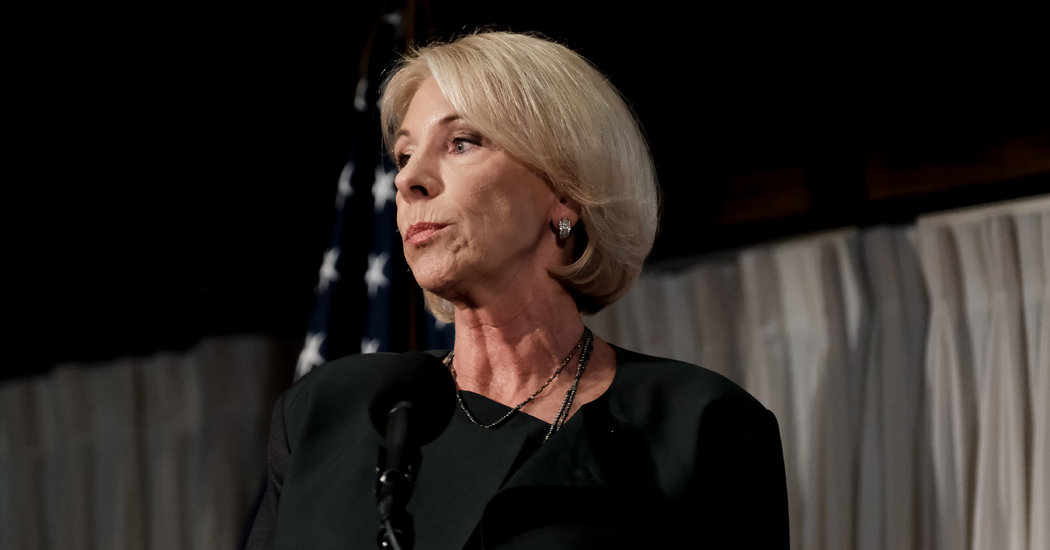 About 1,500 students who attended two art institutes that were part of the sudden collapse of a career-school chain this year will have their federal loans canceled, Education Secretary Betsy DeVos said on Friday.

It was a rare victory for borrowers seeking debt relief from a department that, under Ms. DeVos, has frozen or curtailed relief programs for students who claim that schools defrauded them. Borrowers who attended the two schools, the Art Institute of Colorado and the Illinois Institute of Art, sued the department last month, seeking to have their loans eliminated.

“Students were failed and deserve to be made whole,” Ms. DeVos said. Students who attended the schools from late January 2018 through the end of last year, when they shut down, will have their loans for that period canceled, the department said.

Borrowers will still generally owe on federal loans they took out before Jan. 20, the department said in an email sent to borrowers on Friday. Some people, however, may qualify to have all of their loans eliminated through the department’s closed school discharge program.

The decision was the latest twist in the messy unraveling of the chain, Dream Center Education Holdings, which owned dozens of campuses under the Art Institutes, South University and Argosy University brands.

Dream Center was owned by a Christian nonprofit that acquired the troubled group of for-profit schools in late 2017. It closed some schools within a few months, and the entire chain abruptly shut down barely a year later after millions of dollars in federal financial aid funds that were owed to students went missing. The money has still not been recovered.

The accreditation for the Art Institute’s Colorado and Illinois campuses was removed by the Higher Learning Commission in January 2018, around the time Dream Center took them over. The loss of certification meant that students risked being unable to transfer their credits to other schools or have their credentials recognized by employers.

Officials at the Art Institutes never told students that the campuses had lost their accreditation, according to court filings and the Higher Learning Commission.

By law, the Education Department is not allowed to release federal student loan funds to for-profit schools that are not accredited. But the department sent more than $10 million to the two schools and, according to emails and other records, told Dream Center officials that it was working to allow schools to become retroactively accredited.

The department on Friday blamed the Higher Learning Commission for the mess, saying that the accreditor had harmed students by placing their schools in a “newly developed and improperly defined” accreditation status.

Heather Berg, a spokeswoman for the Higher Learning Commission, said the status had existed for more than a decade. She added that the organization “applauds the Department of Education for helping students who are harmed by higher education institutions that do not accurately disclose their accreditation status.”

Eric Rothschild, the litigation director of the National Student Legal Defense Network, which represented students in the lawsuit against the department, said he was pleased by the agency’s decision to cancel students’ loans.

“We’re thrilled for our clients and all the students at these schools who were misled,” he said.

The Education Department also said it would give students at 24 other Dream Center schools that closed at the end of 2018 an extra month to have their loans eliminated through a program known as closed-school discharge. The change will help around 300 borrowers, the department said.

A group of House Democrats had previously asked the department to extend eligibility for the program back further, to late 2017.

“For the vast majority of defrauded students, this announcement cancels only a small portion of the loans they took out to attend a failing school,” Representative Robert C. Scott, a Virginia Democrat who is the chairman of the House Education Committee, said on Friday.

The department has been under increasing pressure from lawmakers and courts that say it has been stonewalling on student debt relief programs, which Ms. Devos has previously derided as “free money” giveaways.

Last week, another federal judge certified a class-action claim against the department from nearly 160,000 borrowers who say it stalled their requests to wipe out loans from chains including Corinthian and ITT Technical Institutes. The program, known as “borrower defense to repayment,” lets borrowers seek to have loans canceled if their schools acted fraudulently. The Education Department has not approved or denied a single claim for more than a year.