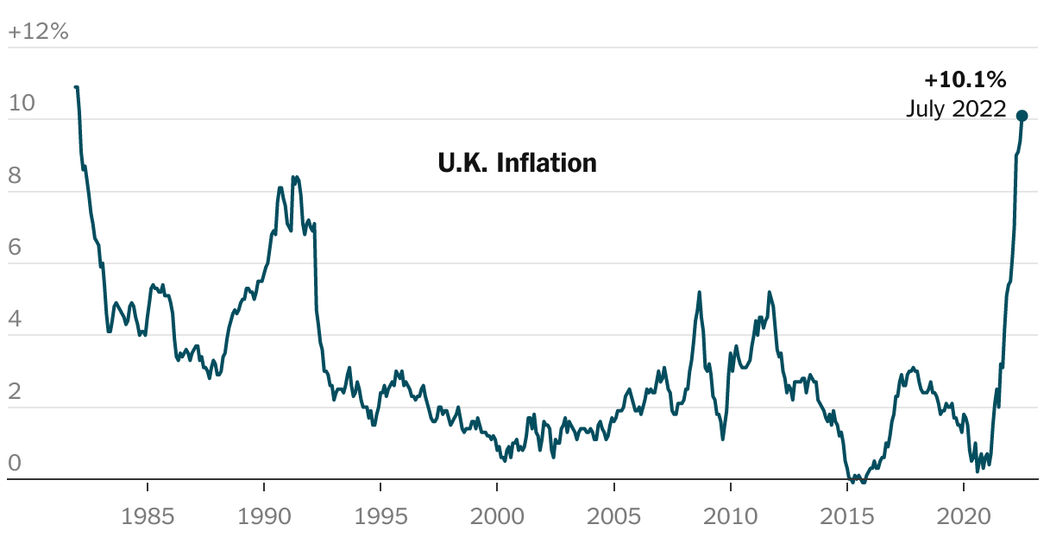 Consumer prices in Britain continued to jump higher in July, rising 10.1 percent from a year earlier, the fastest pace since 1982.

Rising food prices pushed inflation into double digits for the first time in four decades. The inflation rate rose higher than economists had expected, increasing 0.6 percent from the previous month, the Office for National Statistics said on Wednesday. The annual rate of inflation rose from 9.4 percent in June.

Food prices rose 2.3 percent between June and July, the fastest monthly increase since 2001, the statistics agency said, with notable increases in the prices of staples like bread, cereals, milk, cheese and eggs.

Inflation is still a couple of months away from its expected peak, which isn’t expected until autumn, when the cap on household energy bills is reset. At that point, the economy could enter a long recession as high energy prices lead to a drop-off in consumer activity and restrain businesses, according to the Bank of England’s forecast.

But the relentlessly rising rate of inflation is sounding an increasingly loud alarm about a cost of living crisis, as the price of more goods, including essential groceries, and services rise. Looming ahead, households are being warned that the average energy bill could climb to 3,500 pounds (about $4,240) a year in October, triple what it was a year ago. Meanwhile, the central bank is raising interest rates to slow spending as it tries to tackle inflation, which is now five times higher than its target.

Even though wages are growing quickly, twice as fast as they did on average in the decade before the pandemic, they still aren’t keeping up with prices. Adjusted for inflation, pay, excluding bonuses, fell by 3 percent in the second quarter, compared with a year earlier, the statistics office said on Tuesday. It was a record decline.