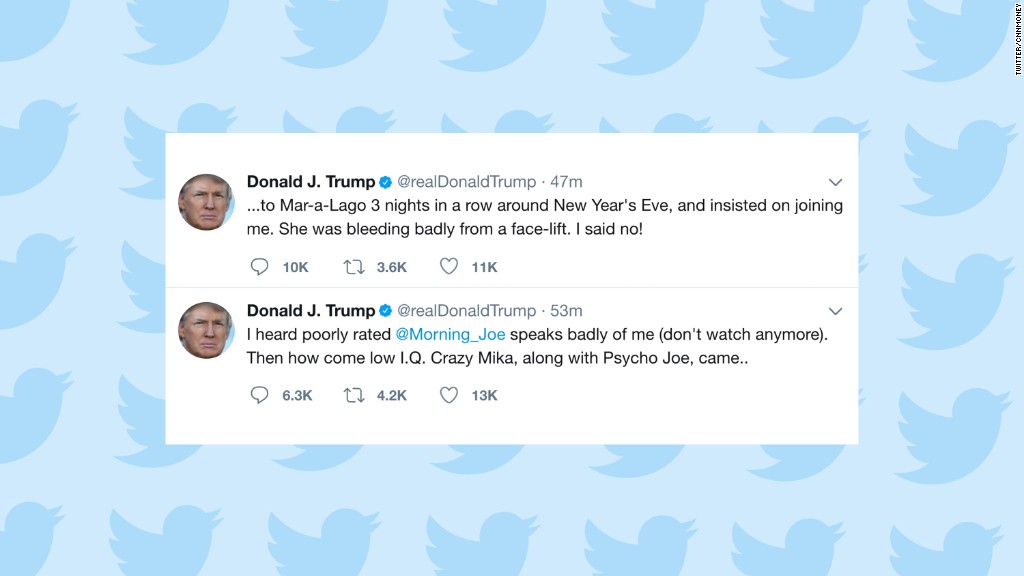 Even by President Trump’s standards, these tweets were shocking.

On Thursday morning, while MSNBC’s “Morning Joe” was on the air, Trump posted a pair of hateful tweets about co-hosts Joe Scarborough and Mika Brzezinski.

He said the show is “poorly rated” (it’s not), he said the hosts “speak badly of me” (that’s true), and he called both hosts disparaging names.

He claimed that Scarborough and Brzezinski courted him for an interview at Mar-a-Lago around the New Year’s Eve holiday.

“She was bleeding badly from a face-lift. I said no!” the president wrote.

He actually said yes, according to accounts of their meeting. Trump, Scarborough and Brzezinski mingled with guests and had a private chat.

For the record, photos from Mar-a-Lago do not show any blood or bandages on Brzezinski’s face.

Stunned commenters on social media noted that Trump targeted both hosts with his barbed tweets, but only opined on the physical appearance of the woman involved.

The president is known to watch all the major morning shows, including Fox News, CNN and MSNBC’s programs. He sometimes calls up pro-Trump guests to thank them for their remarks on the programs.

Trump had a friendly, jovial relationship with “Morning Joe” during the presidential campaign, but it turned sour over time.

At one point he called Brzezinski “very insecure” and threatened to expose her off-screen relationship with Scarborough.

Brzezinski and Scarborough were dating at the time, and they are now engaged.

Thursday’s anti-media tweets were astonishing — and part of a pattern.

On Tuesday his main target was CNN. Trump reveled in the fact that three CNN journalists resigned on Monday after their Russia-related story was retracted.

On Wednesday Trump went after two of the nation’s biggest newspapers, The New York Times and the Washington Post.

He mangled the facts several times, but his overall message came through loud and clear: Do not trust the people who are trying to hold my administration accountable.

Brzezinski responded to Trump Thursday morning with a tweet of her own, mocking him with a reference to “little hands,” a reference to a disparaging idea about him that has circulated for years.

Mark Kornblau, the head of PR for NBC News and MSNBC, also weighed in on Twitter, saying, “Never imagined a day when I would think to myself, ‘it is beneath my dignity to respond to the President of the United States.'”

Never imagined a day when I would think to myself, “it is beneath my dignity to respond to the President of the United States.”

In a statement, an MSNBC spokesperson added, “It’s a sad day for America when the president spends his time bullying, lying and spewing petty personal attacks instead of doing his job.”