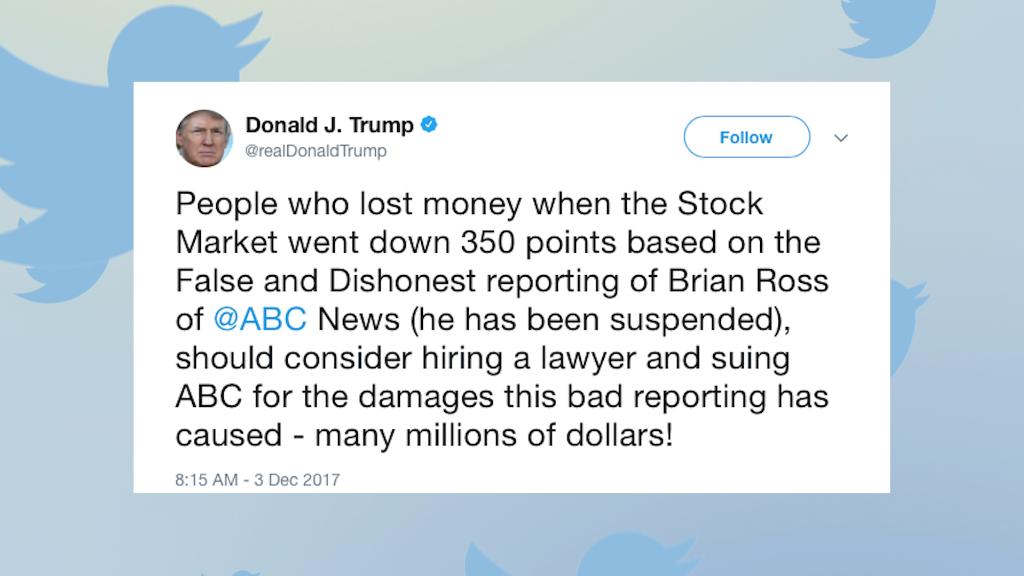 An erroneous ABC News report about President Trump and his former adviser Michael Flynn met widespread criticism and led the network to suspend the journalist behind the story for making a “serious error.”

But could the bungled story also be grounds for an investor lawsuit?

President Trump suggested as much Sunday on Twitter. He pointed to the 350-point downturn the Dow took after the story broke.

That’s enough, Trump said, for “people who lost money” when stocks fell to consider suing ABC “for the damages this bad reporting has caused – many millions of dollars!”

People who lost money when the Stock Market went down 350 points based on the False and Dishonest reporting of Brian Ross of @ABC News (he has been suspended), should consider hiring a lawyer and suing ABC for the damages this bad reporting has caused – many millions of dollars!

But legal experts say that’s just not how the law works.

“The idea of a class action against a media company because of a story leading to a market fall seems to be unlikely at best,” said Floyd Abrams, a First Amendment expert who represented the New York Times in the landmark 1971 Pentagon Papers case.

Stocks fell after ABC News reported that Flynn, who had pleaded guilty to lying to the FBI, was prepared to testify that Trump “as a candidate” directed him to make contact with the Russians.

Meanwhile, stocks largely recovered by the end of the day.

“It’s complete nonsense,” Rickards said. “Brian Ross may have been sloppy, but it’s pretty clear that he didn’t intentionally create a story with the intention of sinking the stock market.”

Federal securities law protects investors from people who try to commit fraud on the markets. But any federal investigation of Ross for a securities violation is highly unlikely, said Nicolas Morgan, an attorney who practices securities litigation and who used to work as a senior trial attorney for the Securities and Exchange Commission.

“I can’t think of a single instance in which there was even any threat under federal securities laws for a mainstream source of journalism” in a situation like this one, Morgan said.

The bottom line, experts say: Without evidence of a deliberate plot, there are no solid grounds for an investor to sue a news organization over an error that moved markets.

“The notion that journalists are responsible for the consequences for news — even if their report was mistaken — would not be consistent with the First Amendment,” said Jane Kirtley, a media ethics and law professor at the University of Minnesota. “If journalists were responsible when bad things happen, they couldn’t report anything.”