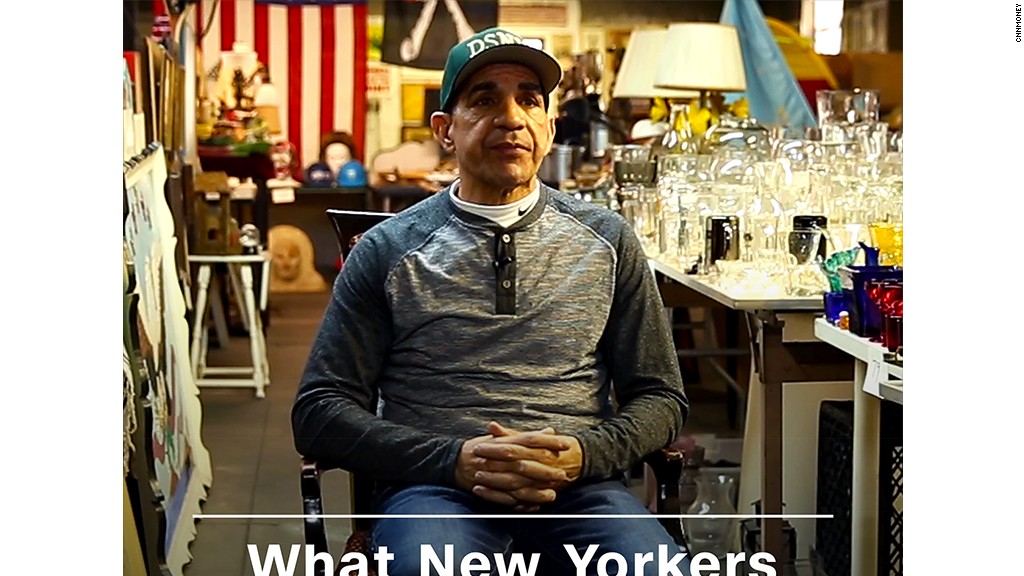 “I love this job. It’s one of the greatest jobs in the world,” Molina says. He didn’t just hold his nose and toss bags into the Department of Sanitation truck. He became an expert at finding “treasures” in the trash.

Molina salvaged over 50,000 items from the garbage and put them on display in what he calls a “secret museum” in Manhattan. He hopes the city will turn it into a real museum soon.

The place is like Antiques Roadshow — on steroids. There are tables crammed with glass vases, gold jewelry, silver candelabra, decorative clocks, electric guitars and violins that all still work.

“Everything here came from the trash,” Molina tells CNNMoney, gesturing at the tables, which hold everything from cowboy hats to stained glass windows a church tossed out.

“If I didn’t take it out of the garbage, this would be in a landfill,” Molina says.

Some of the items are likely worth a lot of money. He has Star Wars trinkets from when the film debuted and baseballs signed by about every Yankees superstar. He even has a book signed by the actress Bette Midler, who recently won a Tony.

“Either these people don’t know the value of (this stuff) or they didn’t want it,” says Molina, an energetic 64-year-old, who retired in 2015.

Time for a real trash museum?

Molina calls his collection “Treasure in the Trash.” It sits on the second floor of a Department of Sanitation garage on East 99th Street in Manhattan. Right now, it’s not open to the public, except for specially arranged tours with groups such as the New York Adventure Club.

“I want the New York City Department of Sanitation to get a nice building and open up a museum where they can put all this stuff,” he says. A department spokesman says no decision has been made about what to do with the collection.

But it’s become a source of pride for trash workers in the city, and beyond. Other New York trash workers heard about his “labor of love” and also started bringing him their best finds to help the collection grow.

CNNMoney got a tour of the collection during one of the rare chances when the public was allowed to see it. Everyone’s mouths were agape at the treasures on display.

Molina loves to show it off. He stops by the 99th Street garage a few times a week to clean and rearrange items. But he hopes when people see all the stuff they realize how wasteful we are.

“We throw away too many things,” Molina says. “New Yorkers need to recycle more and waste less.”

The secret to finding treasure in the trash

Over the years, Molina a developed a knack of knowing whether a trash bag contained something of value. He said it had to do with the way items poked out of the bag, or by the weight and sound the trash made when he picked it up. He claims he can tell the difference between a vase and a wine bottle just by the “ping” it makes when a sanitation worker tosses the trash sack in the truck.

“I have these sensors that go off,” he jokes.

Molina reckons he found a few things every single day during his 34 years. At first, he put items on top of the lockers in the men’s dressing room. When that area filled up, he covered every inch of a vacant room. Today the collection fills almost an entire warehouse floor.

He groups things together by theme, much like exhibits at a regular museum. Point to any item and he can tell you roughly when and where he found it.

The day CNNMoney interviewed him, Molina sat on a chair he found two weeks before. It was soaked from the rain, but he took it home and put it next to his boiler to dry it out. It’s easy to imagine an upscale shop that may have displayed the wooden chair, which has ornate carvings.

“These are things people could donate to someone, but they just put it in a box or a bag and threw it out. They didn’t want to waste the time,” Molina laments.