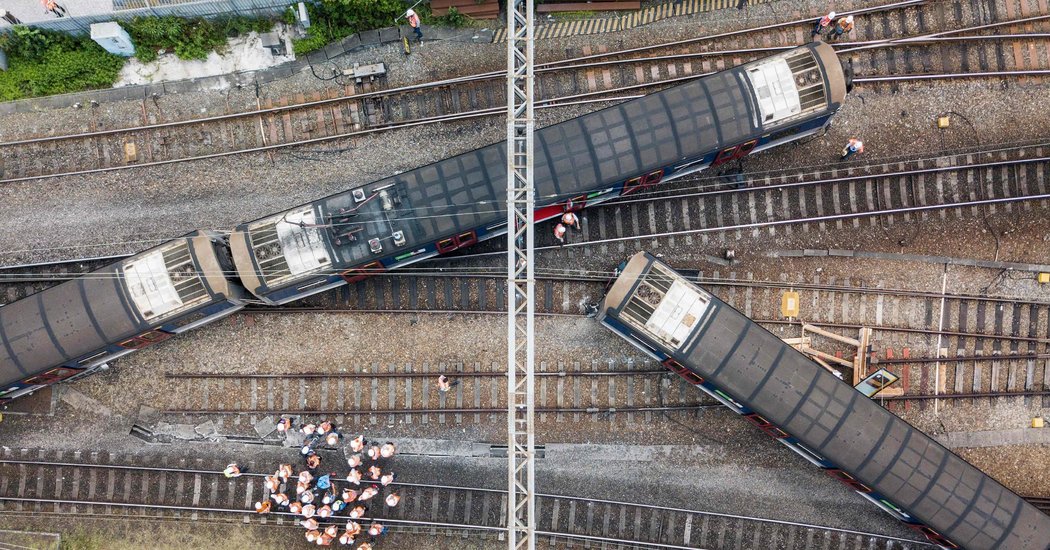 HONG KONG — A subway train derailed in Hong Kong on Tuesday, injuring at least three passengers and snarling the morning rush-hour commute in a city whose transit system has been routinely disrupted by three months of pro-democracy protests.

One man and two women were hospitalized on Tuesday morning after the train derailed near a major station on the city’s Kowloon Peninsula, a spokesman for the Hong Kong Hospital Authority said. Their medical condition was not immediately clear.

Such accidents are exceedingly rare in Hong Kong, and there was no indication that the crash was related to the protests that have prompted the former British colony’s worst political crisis since it was handed back to Chinese control in 1997.

The crash comes after an especially violent weekend of street clashes, in which the Hong Kong police fired tear gas and water cannons after protesters vandalized a subway station and attacked government offices with bricks and gasoline bombs.

Adi Lau, the operations director for Hong Kong’s subway operator, the MTR Corporation, told reporters on Tuesday that three middle carriages of the 12-carriage train had derailed. He said it was too early to draw conclusions about the cause of the accident.

“We will not rule out any possibility, but at this stage we won’t speculate on any particular suggestions,” Mr. Chan told reporters on Tuesday when asked about the possible causes of the crash. He added that an investigation was underway.

The MTR Corporation’s shares fell on the Hong Kong Stock Exchange at the start of trading Tuesday, but had recovered slightly by midmorning.

MTR stations have emerged as a prime target of vandalism during recent protests, apparently because protesters are angry at the company for having allowed riot police officers to enter its stations and beat or round up protesters. On Sunday, protesters set up barricades and broke glass railings inside one downtown station, and set a fire outside another.

The derailment on Tuesday morning occurred as a train entered the Hung Hom Station, which sits across the city’s harbor from Hong Kong Island and is also the terminus for rail service to the Chinese mainland. Passengers were forced to leave the train, which was split into two sections, by walking across the tracks.

In March, an MTR train derailed and hit another train during a test of a new signaling system. But that crash occurred in the middle of the night and neither train was carrying passengers.