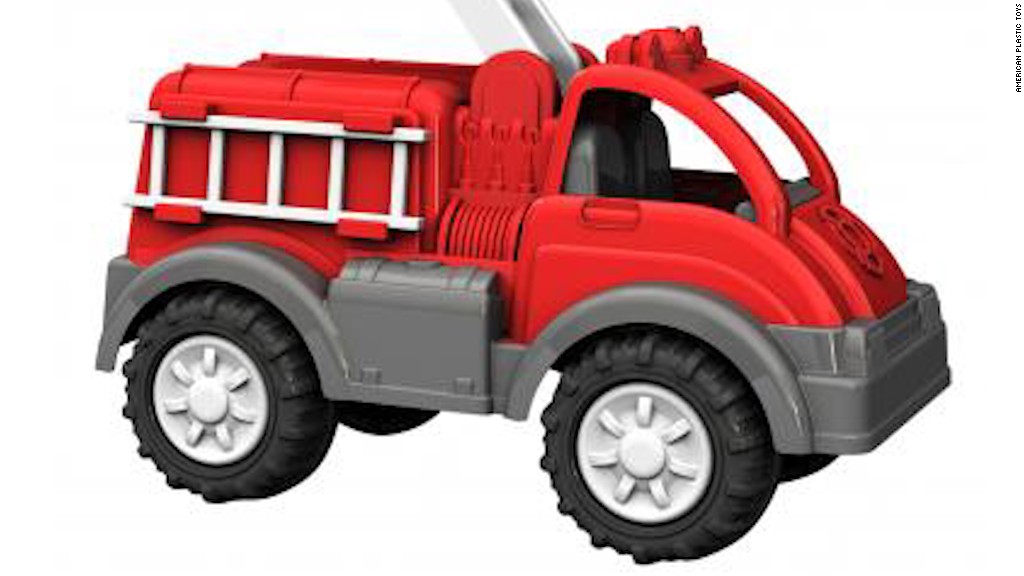 Christmas is still more than three months away. But it looks like investors in several toy makers may be left with lumps of coal in their stockings thanks to concerns that one of their biggest customers could be in trouble.

Shares of industry leaders Hasbro and Mattel as well as smaller toy company Jakks Pacific all fell Monday due to reports suggesting that Toys ‘R’ Us is considering filing for bankruptcy sometime this week.

But investors clearly are nervous. Shares of Hasbro (HAS) dipped more than 1%. Mattel and Jakks Pacific tumbled 6%. Mattel (MAT) is now trading at its lowest level since the spring of 2009, while Jakks Pacific (JAKK) is at an all-time low.

Hasbro, Mattel and Jakks Pacific each generated nearly 10% of their overall sales from Toys ‘R’ Us in their most recent fiscal years.

Toys ‘R’ Us, like the rest of the retail industry, has been hurt by the dominance of Amazon (AMZN, Tech30) as people increasingly buy toys online. Jeff Bezos might as well be Santa Claus for my two young boys.

Related: Toys ‘R’ Us to open pop up shop in Times Square

Walmart (WMT) and Target (TGT) have both emerged as big players in the toy market too.

Toys ‘R’ Us was acquired for $6.6 billion in 2005 by a group that included affiliates of private equity firms KKR (KKR) and Bain Capital, as well as the real estate investment trust Vornado (VNO).

But it has continued to struggle since then. Toys ‘R’ Us reported a more than 4% drop in same-store sales in the first quarter and a bigger loss than a year ago. The company will report its second quarter results on September 26.

Toys ‘R’ Us closed its gigantic store in New York’s Time Square at the end of 2015. It recently opened a temporary (and smaller) store for the holidays in another part of the popular Manhattan tourist spot though.

Still, the troubles facing Toys ‘R’ Us aren’t just about competition from Amazon and Walmart. A lackluster summer at the box office might be hurting the entire toy industry — not to mention movie theater chains AMC (AMC), Regal (RGC), Cinemark (CNK) and IMAX (IMAX).

The big toy companies increasingly rely on Hollywood, as hit movies (particularly for kids) drive sales of licensed toys. Hasbro has held up better than its competition thanks to the success of Disney films, which include the Pixar, Marvel and Lucasfilm studios.

Outside of Disney (DIS), the rest of the box office was weak. There are hopes for a fall rebound, thanks largely to the upcoming “Star Wars Episode VII: The Last Jedi.” However, that would largely benefit Hasbro more than the rest of the industry.

September is off to a hot start too. But that’s because of the success of the movie based on Stephen King’s “IT.” Good luck selling toys based on Pennywise the clown.

Toy companies also have to deal with the fact that many kids are increasingly playing games on consoles, phones and tablets and not with old-school action figures, dolls and other toys.

Even Lego has been struggling lately. And Mattel, acknowledging the threat from tech, recently hired a new CEO who used to be an executive at Google (GOOGL, Tech30).

Toys ‘R’ Us and traditional toymakers may just not be able to compete for the short attention spans of 7 year-olds addicted to playing Geometry Dash on the iPad. I can tell you that from firsthand experience.