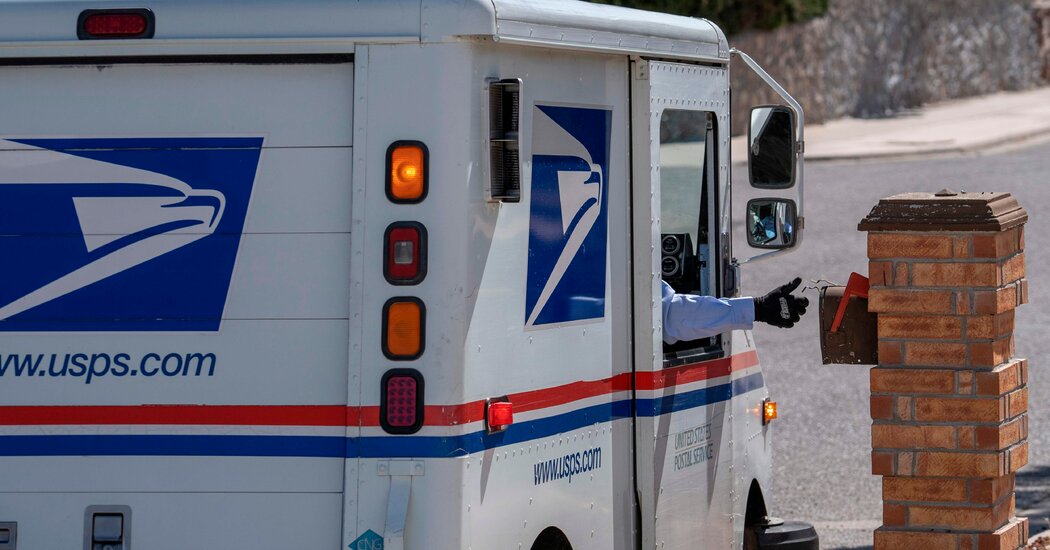 The U.S. Postal Service has been financially besieged for years, and unless Congress acts, the independent agency could run out of money by 2021. Now, there are calls on social media to save, or at least support, the U.S.P.S. by shopping its surprisingly wide variety of goods on its online store.

While all the usual accouterments of a postal service are present, so is a mix of unexpected merchandise. The site has everything from screen-printed Marvin Gaye posters to Santa-as-mailman ornaments to 1970 Plymouth Hemi Cuda muscle toy cars. The runaway hit by far, however, has been a long-sleeve crop top showing a stack of five envelopes in a pleasing rainbow of colors.

“Buying Aesthetic crop tops to help save the postal service was not on my or anyone’s Apocalypse Bingo, but I’ll take it,” one tweet said.

The crop top is sold out, to the chagrin of many finding these tweets late. One person who did get the shirt before it sold out was Kayla Miller of Pittsburgh. Ms. Miller, 28, saw a tweet about the U.S.P.S. store, and after taking a look, ended up buying the crop top and some stamps.

She said she usually doesn’t purchase mass-produced clothes because of the environmental cost. But in this instance, she felt she was doing something tangible for the Postal Service and also acquiring a shirt that would regularly remind her and others about the service’s crisis.

“This is the kind of thing I feel like it’s so easy to just let someone else worry about or forget about, and I don’t want to forget,” Ms. Miller said. “Plus, I get a cute new shirt!”

Most items are connected to stamps in some way, but all of the merchandise has some link to the Postal Service, according to Sara Martin, a senior public relations representative for the organization.

“This could range from small toy vehicles, to puzzles and apparel,” she said. “Some items are restocked if the demand is there. Some are meant for shorter periods or seasonality. We are always offering new merchandise and will be featuring a Bugs Bunny boxed set as well as hip-hop T-shirts, both featuring artwork from current stamps.”

Ms. Martin said she didn’t know if the crop top would be restocked, but pointed out that there are other shirts, like the sweatshirt commemorating the 100th-anniversary of airmail and a shirt showing Mr. Zip, a character created by the Postal Service in 1963 when ZIP codes were introduced.

This isn’t the only effort going on to help the service. Earlier this year, there was a similar online campaign to encourage people to buy stamps. There is a petition to save the service on Change.org, and the Postal Service itself is creating memes it hopes will promote letter writing.

The service has also become a political lightning rod of late because of the crucial role it may play in the presidential election in November. David Hogg, an activist, tweeted to his million followers to shop at the Postal Service store, calling it a way to help the Postal Service financially and “make sure everyone can vote this election!”

And Alexandria Ocasio Cortez, who has tweeted that the service’s financial problems have been caused in part by Republicans, posted on her Instagram about discovering Postal Service Mail Carrier Dog Costumes and Magic Kits. She encouraged her followers to check out what else the store has.

But it’s going to take selling more than selling tote bags to save the service. Groups like the American Postal Workers Union (A.P.W.U.), which represents more than 200,000 postal workers and retirees, would like to expand what services the post office can offer as a way to help plug the financial gap and help support local communities. Those ideas include check cashing, selling hunting licenses, providing Wi-Fi and becoming electric car charging stations.

“There are so many things that the post office could be and should be,” said Mark Dimondstein, the president of A.P.W.U.

Mr. Dimondstein didn’t have any ideas for new merchandise but is not surprised at the spontaneous support. A recent Pew Research poll found that 91 percent of Americans had a favorable view of the agency, and another survey that found the U.S. Postal Service the most essential business during the pandemic. People, Mr. Dimondstein said, want to support a service that they like and need.

“The post office is an iconic part of the country,” he said. “We all use it differently, but we all use it.”