Stocks have set new highs, because so many on Wall Street are following age-old advice: Don’t fight the Fed.

Traders who bet on these things have been expecting up to one full percentage point of Federal Reserve interest rate cuts in the next year, starting with either a quarter- or half-point move this month, after ever more emphatic hints that looser monetary policy is imminent. Because falling rates tend to be good for stocks, it’s easy to see why many people are bullish.

But as evidence accumulates that economic growth may be slowing more rapidly than the Fed had expected, investors might want to reconsider whose side to be on in the fight between the Fed and a possible recession.

“The Fed is getting pretty far behind the curve,” said Rob Arnott, chairman of the investment advisory service Research Affiliates. “The bottom line is the Fed can make a difference, but it has to move fast. I don’t know if it can move fast enough.”

A lot of data have added to the evidence of a softening. Economic output is estimated to have expanded at a 1.4 percent annual rate in the second quarter, according to the Federal Reserve Bank of Atlanta’s GDPNow gauge. The unemployment rate remains low — only 3.7 percent in June, after a stronger-than-expected jobs report this month. But signs that the economy is losing steam have been present all year and more pronounced lately.

Some that emerged in the last few weeks include fairly drastic declines in economic or business activity surveys conducted by Fed regional offices, and the biggest one-month drop ever in a Morgan Stanley survey of business confidence, taking it to its lowest level since 2008. IHS Markit Flash surveys showed the slowest expansion in manufacturing in three years and the lowest reading for the service economy since 2009. And orders for durable goods dropped 3.3 percent in the 12 months through May, the biggest annual drop since 2016. 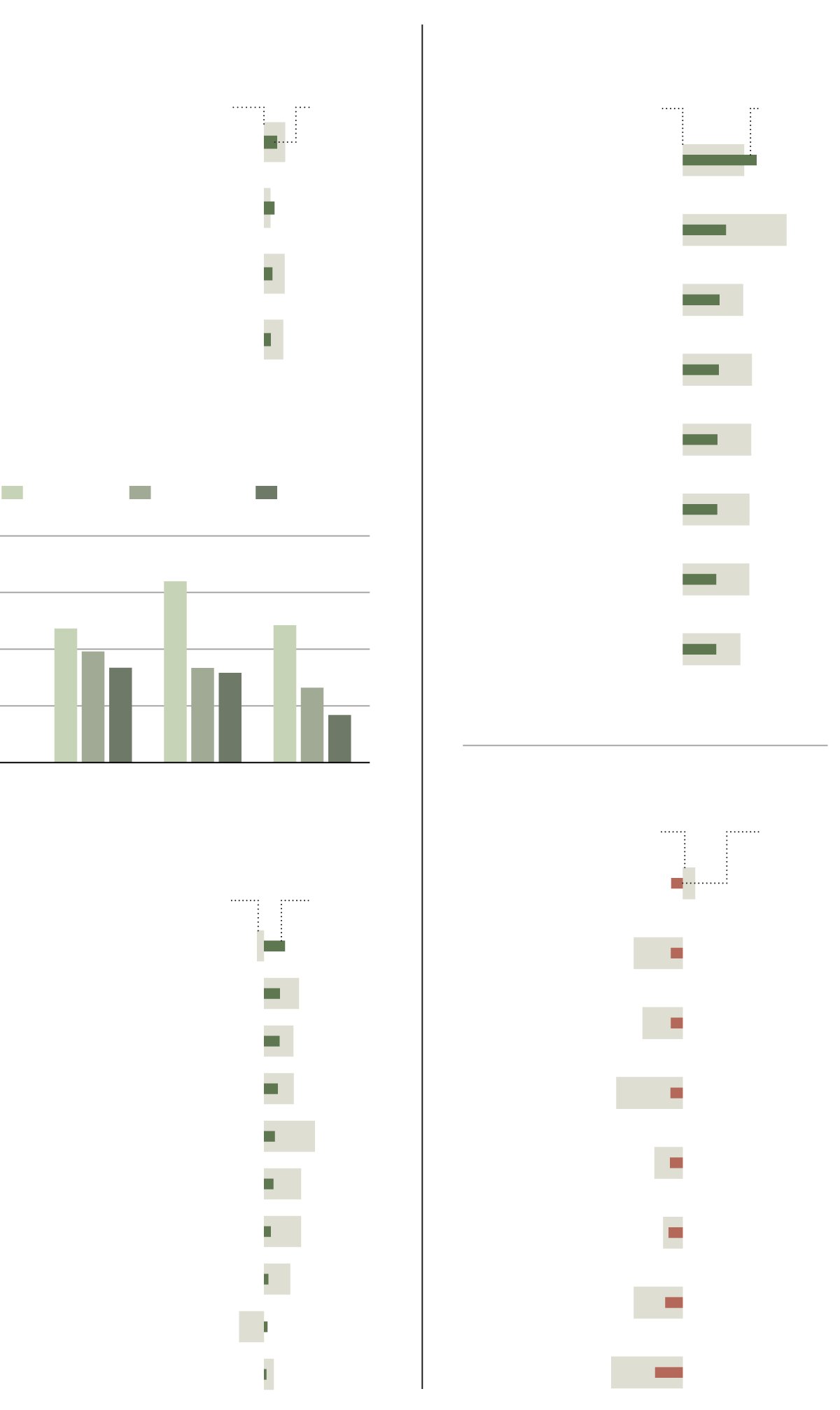 Returns in the second quarter.

Returns in the second quarter.

Many readings from foreign economies are much worse. The on-again, off-again, on-hold-again trade war with China — and occasionally Canada, Mexico and Europe — hasn’t helped confidence anywhere. Neither have simmering tensions with Iran or Britain’s inability to engineer a graceful exit from the European Union.

“Real-time data flow is mostly slanted negative,” said Tad Rivelle, chief investment officer for fixed income at TCW. “If we’re not in a recession, then we’re on the cusp.”

Olga Bitel, global strategist for William Blair & Company, finds that the cusp has come and gone in some sectors.

“Globally we can say that the industrial side of the economy is in recession,” she said. “For growth to stabilize, we need to see a rebound.”

That depends on the trade outlook, where, Ms. Bitel said, “the outcome is binary.”

She’s optimistic that “something will get done in the next two to three quarters because consumers are starting to feel it in their wallets” as tariffs drive up the prices of foreign goods. But she warned that “if we were to have further escalation, retail consumption would take a substantial hit and show up in much weaker growth numbers.”

There may be a third option on trade: an extended stalemate. That could be the result of President Trump’s meeting with Chinese President Xi Jinping at the Group of 20 summit meeting last month. The leaders agreed to keep disagreeing but to resume talks at some point.

That was “a tiny bit better than expectations,” said Rebecca Patterson, chief investment officer of Bessemer Trust. “It doesn’t mean anything’s resolved. Both sides want a deal, but how long it takes to get from A to B, and what the details of B are, remains to be seen.”

In the meantime, she said, “you just have this persistent uncertainty” weighing on business activity and driving economic indicators down.

The iffy-to-awful backdrop is doing no favors for the bottom line. As the third quarter began, earnings for the S&P 500 companies were estimated by FactSet to have declined 2.6 percent in the 12 months through June, after a 0.3 percent year-on-year drop in the first quarter. The forecast for the current period is a 0.5 percent decline.

None of these developments seemed to matter much to buyers, who pushed the index to gains of 3.8 percent for the second quarter and 17.3 percent for the first half. After falling in May, it had its best June since 1955, reaching new highs that have lingered into July.

That helped the average domestic stock fund tracked by Morningstar to gain 3.6 percent in the quarter, with portfolios focused on financial services and technology doing especially well. International stock funds did almost as well as their domestic peers, rising 3.1 percent, helped by Latin America portfolios and held back by losses for funds that specialize in China.

The market has been largely unperturbed by the persistent economic weakness because each bad piece of data is taken as confirmation that the Fed will ease, but Andrew Sheets, chief cross-asset strategist at Morgan Stanley, finds such thinking perverse.

“We strongly disagree with this bad-is-good logic and the line of reasoning behind it,” Mr. Sheets said in a June 13 podcast on the company’s website. “The expectation that easing central bank policy” will “offset weaker data is at odds with both a wide reading of historical data and monetary theory.”

Changes in Fed policy take up to a year to affect economic growth, he noted. The weak data can damp consumer and business sentiment and activity, further depressing growth and encouraging risk aversion among investors.

But stock investors seem to be fixed on the view that the central bank will bail them out while the economy is still healthy.

“The markets have learned to seek the opium of Fed intervention and have grown accustomed to the idea that it will fix everything,” said Mr. Rivelle of TCW. “That’s a dangerous, misplaced idea. Market forces always overwhelm anything central banks can do.”

The forces he had in mind appeared to be at work in the bond market. By briefly pushing 10-year Treasury yields below 2 percent in early July, close to 2016 record lows, bond traders were pricing in a long run of low growth, despite the multiple rate cuts already factored into short-term interest rates.

Even though yields have already fallen a lot, Mr. Rivelle recommends that investors play it safe and put their money into Treasuries and “high-quality corporate stuff.”

The decline in long-term yields to below three-month Treasury bill rates created an inversion of the yield curve, a reliable precursor of recession. An inversion occurred in March. It was widely remarked upon, then widely dismissed because it lasted only a few days. The curve inverted again on May 23, according to the Federal Reserve Bank of St. Louis, and it has been inverted ever since. That’s harder to ignore.

Whatever the implications of the inversion, bond prices rise when yields fall, so bond funds did well in the second quarter, up 2.5 percent. Long-term government funds were standouts, rising 5.8 percent.

While there’s debate over how much the Fed can help the economy, few on Wall Street seem to doubt that it’s willing to try mightily. But in Ms. Patterson’s view the Fed will need room to move more aggressively later if needed.

“I don’t think the Fed’s going to cut nearly as much as is priced in,” she said, even before the strong jobs report prompted a reassessment by some traders of just how many rate cuts may be in store. If not, “they’re going to have to walk back expectations. That will be a fun little dance to do.” She predicts a quarter-point cut at the July meeting.

When it comes to expectations for share prices, hers are meager.

“You want to add risk at this juncture? I’m going the other way,” Ms. Patterson said. “Taking a bit of profits is a pretty good idea. The market’s putting too much on the Fed to save us.”

She would shift a modest amount from stocks to government bonds, even with yields so low, and she would make a small allocation to gold because it often moves independently of other assets. She also likes Singapore stocks because of the country’s sound economy, and she would avoid most other foreign markets, particularly in Europe and Japan.

Ms. Bitel of William Blair is less averse to stocks, but she prefers defensive niches like software services and health care technology.

“Their revenues are more stable and predictable,” she said. “They’re expensive, but they’ll continue to perform in a downturn.” She would avoid economically sensitive market segments, although she acknowledged that they’re cheap and that if the economy bounces back unexpectedly, they should do well.

As far as Mr. Arnott of Research Affiliates is concerned, “it’s definitely time to be risk-off in U.S. assets.” Not only does the economy appear fragile, he said, but the stock market “is expensive by just about any measure you look at” and is “priced to give you terrible forward-looking returns.”

Emerging markets carry half the valuations of American stocks, he said. Debt in emerging markets yields more than American high-yield debt, he added, and he would own some along with Treasury bonds. Even though Treasury yields have shrunk, they’re far higher than Japanese or European equivalents, he noted. Mr. Arnott also favors European stocks, especially in Britain, where the market trades at roughly a 60 percent discount to the United States.

If you’re still worried that fighting the Fed is too tough, remember that you wouldn’t be its only opponent. There’s the bond market and the deteriorating economy. And as Mr. Rivelle warned, there are the ramifications, as yet unknown, of using exotic methods to push markets to levels that they wouldn’t have reached on their own and that might prove unsustainable.

“If the bull market has been substantially due to central bank policy, then you have a situation where the institution is responsible for creating the problem,” he said. “We’re running an experiment and acting like we know the consequences.”