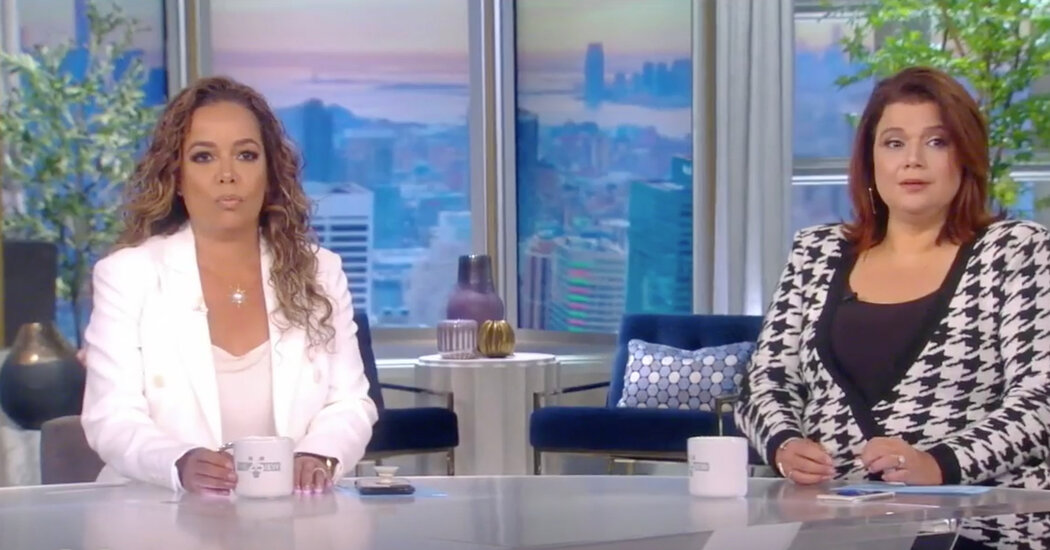 A dramatic scene played out on “The View” on Friday morning when two of the show’s hosts, Ana Navarro and Sunny Hostin, were directed to leave the set live on the air after both had apparently tested positive for the coronavirus.

“The View” had just returned from a commercial break about 15 minutes into the show and the four hosts of were on the verge of introducing Vice President Kamala Harris for an in-person interview. ABC News had been billing it as Ms. Harris’ first in-studio interview since taking office.

Then the mayhem began.

“OK, we’re back, there seems to be something happening here that I’m not 100 percent aware of,” said Joy Behar, one of the hosts, as she glanced around the set, looking perplexed. “Can someone please apprise me of the situation?”

In the background, a producer was overheard saying, “I need the two of you to step off for a second,” apparently gesturing to Ms. Navarro and Ms. Hostin. Both came off the set.

“So shall I introduce the vice president?” Ms. Behar said, looking over to a producer.

“Yes,” the producer replied, before another person off screen barked, “No!”

“As we always do in television when we’re in a tight spot, we’ll be right back,” Ms. Behar said, before the show abruptly went into a commercial break.

When “The View” returned after a five-minute break, Ms. Behar told viewers what happened.

“OK, so since this is going to be a major news story any minute now, what happened is Sunny and Ana apparently tested positive for Covid,” Ms. Behar said. “No matter how hard we try, these things happen, they probably have a breakthrough case. They’ll be OK, I’m sure, because they are both vaccinated up the wazoo.”

ABC News did not immediately return requests for comment. Whoopi Goldberg, the show’s fifth host, was not on set on Friday.

For the next half-hour, Ms. Behar and her remaining co-host, Sara Haines, scrambled and took questions from the studio audience as they tried to, as Ms. Behar put it, “tap dance” their way through what would have been an interview with the vice president.

Ms. Harris was ushered to a remote location and joined the show for a brief interview via satellite in the final 10 minutes of the show.