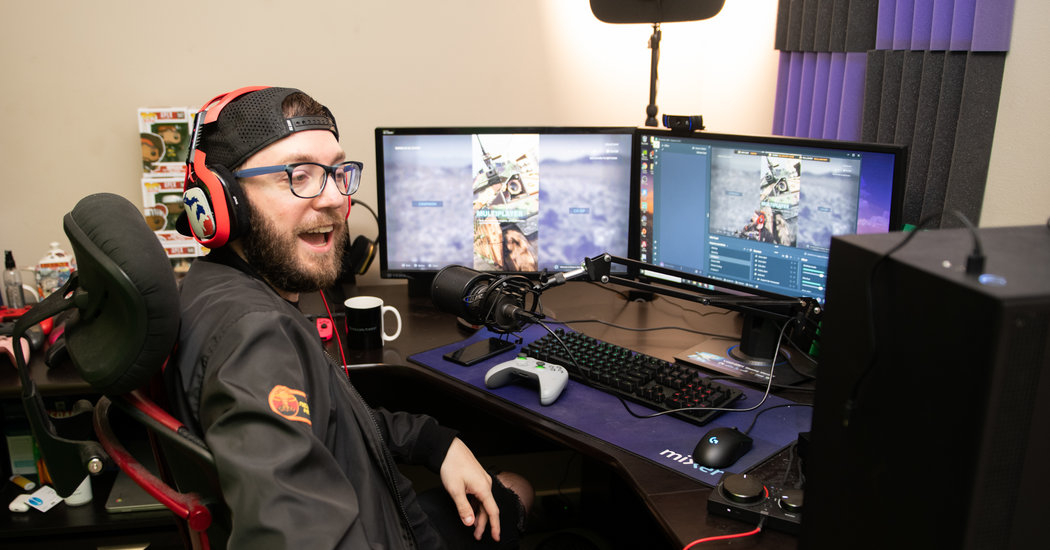 Despite their efforts to grab a larger slice of the video game streaming arena, none has made a dent in the power of the market leader, Twitch.

Amazon paid $1 billion in 2014 to acquire Twitch, which now controls 76 percent of the video game streaming market in the Americas and Europe. Its popularity has attracted numerous rivals, all fighting to court millennial cord-cutters and younger “cord-nevers.”

The competition among tech giants and media companies also signals the importance of live streaming in the $180 billion video game industry, which generates more revenue than movies and music. But in an era when established platforms tend to monopolize entire sectors, taking on Twitch has proved difficult.

Microsoft has taken aggressive steps into video game streaming, starting with its 2016 acquisition of Beam, a streaming platform it renamed Mixer a year later.

It made its boldest move this year by going after one of Twitch’s biggest stars, signing an exclusive deal with Tyler Blevins, better known for his online alias, Ninja. The terms of the multiyear deal were not disclosed, but influencer agents and industry analysts estimated that it was in the double-digit millions.

Unfortunately for Microsoft, bringing on Mr. Blevins has done little to raise Mixer’s view count. Mixer maintains just 3.2 percent of the live-streaming market and grew only 0.2 percent in the third quarter, according to the industry analytics firm StreamElements. And Twitch increased its viewership during the quarter, despite losing Mr. Blevins in August.

Mixer has been growing steadily since it started, said Ben Decker, head of gaming services at Microsoft, and now has more than 30 million monthly active users.

But to really compete with Twitch, which has reported that it has 140 million monthly users, Microsoft needs to do more than spend a few million dollars on a star streamer, said Doron Nir, the chief executive of StreamElements.

“When it comes to having a streaming platform, this is a billion-dollar game,” he said. “It’s going to take a lot more from Mixer to really take away from the enormous audience that Twitch has.”

Mr. Nir said he didn’t believe the deal for Mr. Blevins was bad for Mixer. It still brought the platform widespread media attention and put it in the conversation. And Microsoft was not discouraged, bringing over Michael Grzesiek, a professional gamer known as Shroud, and Cory Michael, a streamer who goes by King Gothalion, from Twitch.

Given how enormous the Twitch community is, it’s hard for content creators to justify streaming on smaller platforms. But some streamers are drawn to the opportunity to start fresh.

Chris Covent had long dreamed of becoming a full-time video game streamer, the modern version of public-access television personalities who broadcast their lives on the internet.

But after four years on Twitch, Mr. Covent was not gaining the following that would allow him to leave his job as a Boost Mobile store manager in Flint, Mich. He decided in 2016 to make the jump to Mixer.

Why do all these major internet platforms want to be in video game streaming? Facebook is already the biggest social media network, Google is the largest search engine and the Disney-owned 21st Century Fox — which invested $100 million in the social broadcasting platform Caffeine last year — is a dominant player in Hollywood.

More than 700 million people a month play, watch or hang out in gaming groups on Facebook, said Vivek Sharma, the company’s head of gaming.

“That’s a massive number,” he said. “It’s a much bigger phenomenon than people realize.”

Facebook has been involved in gaming for a while, but the company’s entrance into streaming is more recent. It signed an exclusive deal last year with ESL, the largest e-sports company in the world. As part of the arrangement, ESL’s premier tournaments for the game Counter-Strike: Global Offensive were to be showcased only on Facebook in Western markets.

But viewership of the 2019 ESL One New York tournament at the Barclays Center in Brooklyn dropped after the move to Facebook. Afterward, the deal was reworked to be nonexclusive, and ESL One content appeared on both Facebook and Twitch.

“I think what we learned out of this first year together was that Facebook was new to video at the time,” said Craig Levine, the global chief strategy officer of ESL. “Much of our fan base was looking for a different experience, and much of our core fan base preferred to watch the content in different places.”

Facebook did not feel burned by the renegotiated deal. Instead, Mr. Sharma said, it has chosen to lean on its strength: community building.

If Fortnite or Counter-Strike fans can come together on Facebook after a major tournament, that will help the site grow and be a staple in gamers’ lives, he said. And Facebook Gaming will continue to support creators on its live-streaming platform, but with a focus on markets it’s excelling in, like Brazil, Mexico and Southeast Asia.

Twitter is also positioning itself as a complementary platform to live-streaming services.

“Whether it’s the e-sports tournament and seeing highlights from that, or a gaming conference like E3, those pieces of short-form video content do incredibly well on the platform,” said Rishi Chadha, the global head of gaming partnerships at Twitter.

The platform had one billion tweets about gaming last year, and 2019 is likely to be even bigger, with a 20 percent increase in conversations so far.

Twitter has live-streamed major events, including e-sports tournaments and news conferences at E3 in Los Angeles. When Epic Games shut down Fortnite for two days, leaving gamers with nothing more to look at than a spinning black hole, Twitter was live-streaming the gaping void. That stream had 1.4 million concurrent viewers, which, according to Mr. Chadha, made it the largest gaming live stream on the platform — and one of the largest on Twitter ever.

Because Twitch has been around the longest, it has developed its own culture, with inside jokes tossed around on the chat logs that accompany live streams. That community has allowed streamers, who get most of their income from subscriptions and donations, to thrive.

“The dialogue that’s happening is in a language that’s unique to Twitch,” said Mike Aragon, the senior vice president of content at the company.

Twitch encourages the sense of community, engaging with users and giving them more tools to let their language thrive. And that community spirit extends to charity; Twitch viewers donated over $40 million in 2018 through various campaigns.

At the moment, even with all the multibillion-dollar companies competing, the live-streaming market is still small.

“Twitch is a rounding error,” Michael Pachter, a research analyst for Wedbush Securities, said in an email. Amazon is not going to reveal Twitch’s revenue anytime soon, he said, but it is most likely about $250 million a quarter. Amazon did not break out the revenue of Amazon Web Services until it grew to $1.5 billion a quarter.

Streaming platforms will continue to expand their content, bringing on more traditional sports leagues and celebrities. And they might upend online video consumption entirely, the way Netflix did 12 years ago.

Mr. Covent, now one of the top streamers on Mixer, has found a new community with a ragtag culture that is willing to support him, even if it’s on a platform that is far smaller than Twitch. He has since moved to Auburn, Wash., a suburb of Seattle, to be closer to the Microsoft ecosystem and is now a full-time streamer.

“I don’t think I’ve ‘made it,’” he said, “but I definitely think I’ve achieved some success.”