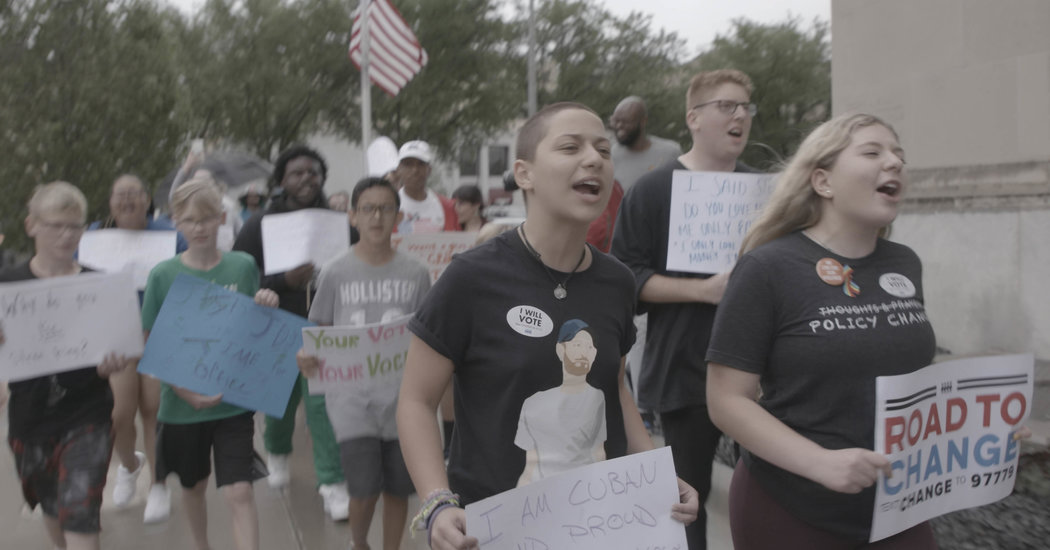 The Oscar winners Julianne Moore and Alicia Vikander are two of the four actresses who play the feminist activist Gloria Steinem at different ages in “The Glorias,” an unconventional biopic from the director Julia Taymor. The film will be among the 118 feature-length works at the 2020 Sundance Film Festival, the programmers announced Wednesday.

Next year’s iteration of the festival, the top showcase for independent cinema in the United States, will include narrative features and documentaries that tackle subjects recently in the news, including school shootings, the #MeToo movement, immigration and the murder of Jamal Khashoggi.

“A lot of our films are ‘of the time’, which has been a long time coming,” John Cooper, the director of the festival, said. “The audience has paved the way for a different kind of indie film: more authentic stories from different cultures and backgrounds.”

In other films scheduled to have their premieres at Sundance, Elisabeth Moss portrays the author Shirley Jackson in “Shirley,” Michael Keaton takes on the role of a lawyer responsible for the 9/11 Victim Compensation Fund in “Worth” and Benedict Cumberbatch plays a businessman involved in the Cuban Missile Crisis, in “Ironbark.”

The festival will also include a new film starring Anne Hathaway and Ben Affleck, “The Last Thing He Wanted,” from the director of “Mudbound,” Dee Rees; Viggo Mortensen’s directorial debut, “Falling,” which will be shown on the closing night; and “Wendy,” a reimagining of J.M. Barrie’s “Peter Pan,” directed by Benh Zeitlin, whose “Beasts of the Southern Wild” won the Grand Jury Prize at Sundance in 2012.

The festival, which will run from Jan. 23 to Feb. 2 in and around Park City, Utah, was started in 1978 by Robert Redford and has long been a testing ground for new films and talent. The Coen brothers’ first film, “Blood Simple,” won the Grand Jury Prize in 1985, and Quentin Tarantino’s career took off after “Reservoir Dogs” made its debut at Sundance in 1992.

It became something of an annual circus in the 1990s, when indie cinema was booming and distributors braved the snow in search of the next unlikely hit, everything from the cult comedy “Napoleon Dynamite,” directed by Jared Hess, to “Precious,” an Oscar winner directed by Lee Daniels.

Now the executives tramping through Park City are likely to be looking for content to fill their streaming services. Amazon scored big in 2017 with a film it picked up at the festival, “The Big Sick,” a comedy co-written by and starring Kumail Nanjiani. It grossed more than $56 million at the box office and is now available on Amazon Prime Video.

Disney Plus, the streaming service unveiled last month by the Walt Disney Company, will have a presence, with “Timmy Failure: Mistakes Were Made.” Directed by Tom McCarthy, a filmmaker known for “Spotlight,” the best picture winner at the 2016 Academy Awards, the film will be included as part of the festival’s children’s slate.

Relative newcomers like Apple, Amazon and Netflix have kept Sundance vibrant. “It’s good news when people get the financial support to make interesting films,” Mr. Cooper, the festival director, said. “The streaming companies are certainly helping with this sector of the entertainment space.”

Films that made an impression at the most recent festival included Lulu Wang’s “The Farewell,” the documentary “Apollo 11” and “Late Night,” a film written by Mindy Kaling and starring Emma Thompson as an imperious talk show host.

Amazon paid $13 million for the domestic distribution rights to “Late Night” during its last Sundance visit, but it did not repeat the success it had with “The Big Sick.” “Late Night,” which received rave reviews at its premiere at the Eccles Center Theater in Park City, generated just $15 million in the United States during its theatrical run, despite a hefty marketing campaign, showing the difficulty of predicting which films will break out.

A contender from the 2020 lineup is “Downhill,” a remake of the acclaimed Swedish film “Force Majeure.” It stars Will Ferrell and Julia Louis-Dreyfus as a married couple rattled in the aftermath of an avalanche that takes place during a ski vacation.

Sundance’s documentary lineup includes “The Dissident,” directed by Bryan Fogel, a film that examines the murder of Mr. Khashoggi, a dissident Saudi journalist, and the possible cover-up by the Saudi government. Mr. Fogel’s previous documentary, “Icarus,” premiered at Sundance in 2017 and won its special jury award before taking the best documentary Oscar.

Another documentary slated for the festival, “Us Kids,” directed by Kim A. Snyder, centers on the survivors of the 2018 massacre at Marjory Stoneman Douglas High School in Parkland, Fla. And a still untitled documentary by the filmmakers Kirby Dick and Amy Ziering tells the story of the former hip-hop executive Drew Dixon, who accused the mogul Russell Simmons of raping her. (Mr. Simmons denied the accusations by Ms. Dixon and three other women.)

Other films to keep an eye on include “Minari,” starring Steven Yeun as a Korean father who moves his family to Arkansas in the 1980s to start a farm. Made by the writer and director Lee Isaac Chung, the movie is “a reinvention of the American dream story,” said Kim Yutani, Sundance’s director of programming.

A film with comic potential is “Palm Springs,” produced by Andy Samberg and his partners in the troupe The Lonely Island, Akiva Schaffer and Jorma Taccone. It stars Mr. Samberg as a wedding guest who has a strange encounter with the maid of honor, played by Cristin Milioti.

Justin Simien, the director of the 2014 satire “Dear White People,” returns with “Bad Hair,” a film scheduled to kick off Sundance’s Midnight category of edgier fare. Set in 1989, it tracks an ambitious young woman, played by Elle Lorraine of the HBO show “Insecure,” who gets a weave in order to succeed in the image-obsessed world of music television, only to suspect that the hair may have a mind of its own.