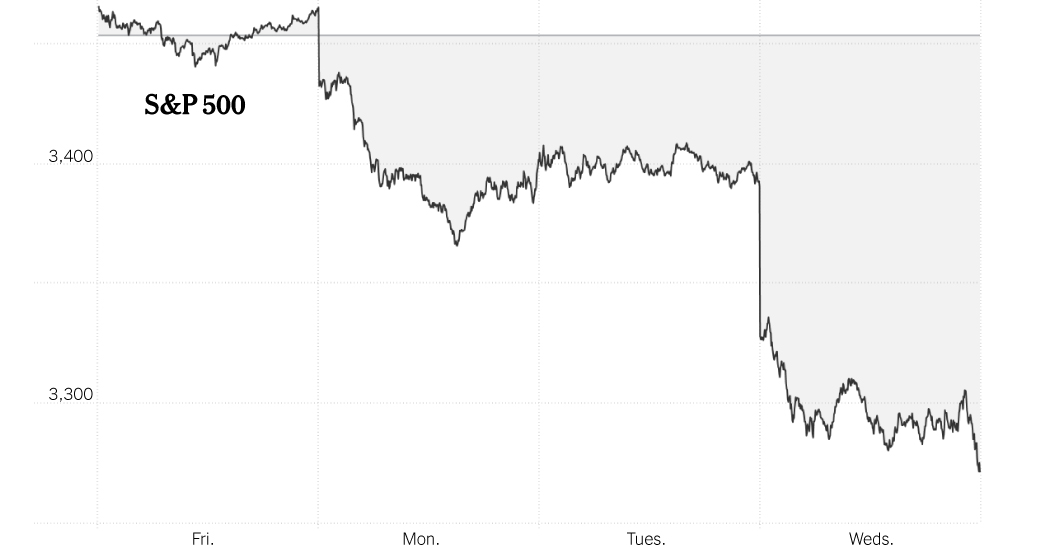 Coronavirus flare-ups across the United States and new lockdown measures in major European economies sent stocks sliding to their worst performance in months on Wednesday.

The S&P 500 ended the day 3.5 percent lower, notching the market’s third straight decline and the worst drop for Wall Street since June 11.

The decline wiped out the S&P’s gains for the month as investors dumped shares. All 11 sectors fell as traders jettisoned stocks in economically sensitive sectors like energy. Even tech was squeezed — the tech giants were once thought to be almost immune to the economic effects of the virus. Treasury yields fell as investors sought the safety of government bonds, and economic nervousness pushed oil prices down: Benchmark West Texas Intermediate crude oil fell 5.5 percent to $37.39 a barrel.

As recently as Oct. 12, the S&P 500 was up more than 9 percent for the year, as investors seemed to grow more confident that Congress and the White House would be able to produce a new dose of federal stimulus before the election.

But those talks have stalled. And with Covid-19 cases now reaching a new peak in the United States, the economy is staring down a worsening pandemic without the reassuring flow of new federal dollars to help prop up small businesses and consumer spending. By Wednesday’s close, the year’s gains for the S&P 500 had shriveled to 1.3 percent.

“You’ve had everybody pricing in best-case scenarios,” said William Delwiche, an investment strategist at Baird, a financial firm in Milwaukee. “And all of the sudden those aren’t being realized.”

Even before trading opened in New York, European markets were enduring an ugly session. Major markets slid 4.2 percent in Germany and 3.4 percent in France. The pan-European Stoxx 600 index declined nearly 3 percent. As the U.S. trading day unfolded, Germany announced a new one-month partial lockdown aimed at stemming a surge of infections. France followed, announcing a full nationwide lockdown for the second time in 2020.

“The continued spread of the virus and enactment of new measures risk slowing or reversing the bounce-back in European growth over recent months,” Mark Haefele, chief investment officer at UBS Global Wealth Management, said in a note to clients on Wednesday.

The United States, too, is suffering a renewed wave of coronavirus infections: The number of Covid-19 hospitalizations is up an estimated 46 percent over the last month. And New Jersey’s largest city, Newark, imposed a curfew and reinstated some limits on gatherings to control an outbreak there.

Even with continuing signs of a strong economic recovery — on Thursday, the government is expected to report that G.D.P. grew about 7 percent in the third quarter — the jump in infections is beginning to undermine confidence in how long the recovery can last.

“Seeing restrictions going back into effect in Europe is giving some investors an unwelcome déjà vu feeling, and their automatic response is to hit the ‘sell’ button,” said Greg McBride, chief financial analyst at Bankrate.

The investor unease was clear: The VIX — the Chicago Board Options Exchange Volatility Index, widely considered the stock market’s “fear gauge” — jumped roughly 20 percent to its highest level since June.

Investors have been largely willing to overlook deep economic problems for much of this year. Between late March and early September, stocks soared 60 percent as investors rode a wave of monetary and fiscal stimulus from the federal government that resuscitated risk-taking after stock prices crumbled with the start of lockdowns in the United States.

Expectations that more federal money would flow into the economy kept the momentum going: Just a few weeks ago, analysts across Wall Street thought it was all but certain that another stimulus bill would be signed into law before the election.

But since early September, when it began to be clear that further federal largess would not be immediately forthcoming, the romp has essentially petered out.

Now, with third-quarter earnings season underway, investors appear to be showing a renewed interest in how the economic downturn is hitting the fundamentals of corporate America.

Boeing reported its fourth consecutive quarterly loss as it continues to struggle with the grounding of its 737 Max passenger plane and warned of further layoffs to come. Its shares fell 4.6 percent.

Cruise lines continued to tumble, with Carnival down 11 percent and Norwegian dropping 9 percent. Major airlines dropped, with Delta down 3.5 percent and United off 4.6 percent.

And earlier this week, the giant German business software company SAP suffered a more than 20 percent dive after its earnings disappointed, largely because of underperformance in Concur, its unit focused on business travel expense management.

The fallout from the virus is not the only question about the future that’s weighing on investors’ minds.

While many on Wall Street have warmed to the idea of a Biden presidency, the looming election continues to create uncertainty for investors. Control of not just the White House but also the Senate hangs in the balance, and investors have plenty of reason to stay on the sidelines and see whether Nov. 3 will generate a serious swing in policy.

“It’s certainly not giving people a reason to step in and buy,” Mr. Delwiche said.