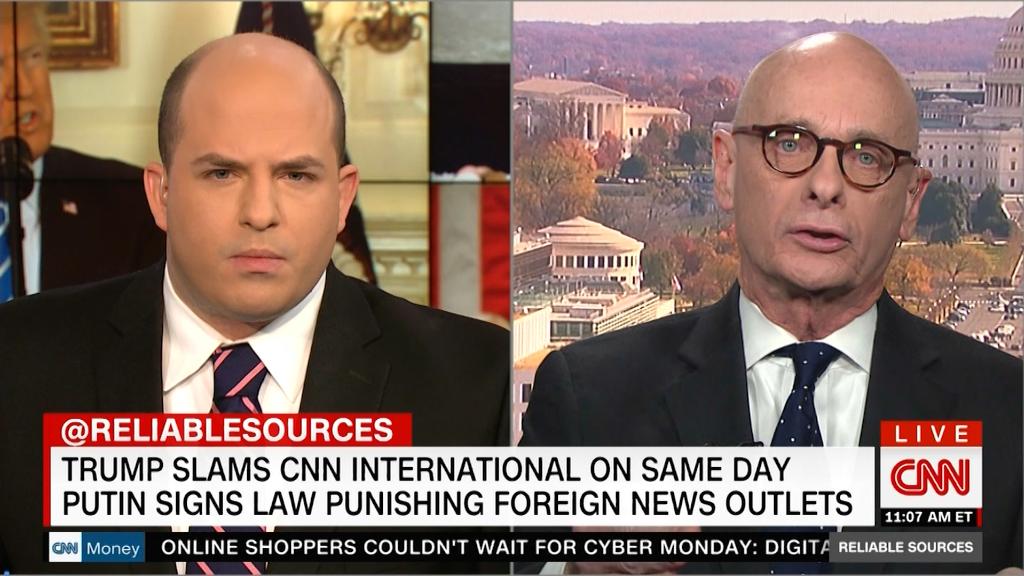 One year ago this week, president-elect Donald Trump repeatedly complained about CNN and tweeted a totally baseless conspiracy theory.

Now, as president of the United States, he’s … posting the same kind of stuff.

You might be numb to it by now, or you might still find it shocking. Here’s an argument in favor of being shocked: Trump is asserting that real, established news outlets are “fake” while promoting sources that are full of actual fake information.

Every time he does this, every time he blasts the free press and promotes an alternative pro-Trump universe, it’s a setback for media literacy and an informed citizenry.

“We shouldn’t normalize the spectacle,” John Avlon said on Sunday’s “Reliable Sources,” because “it is a serious, constant attack at our democratic norms, going after the press, going after individual entities.”

Avlon, the editor in chief of The Daily Beast and a CNN analyst, said “most presidents do grow into the office,” but argued Trump has “rejected that mantle of responsibility.”

Case in point: In the last week of November 2016, the president-elect claimed without evidence that “I won the popular vote if you deduct the millions of people who voted illegally.”

There weren’t millions of illegal votes, and he did not win the popular vote.

When CNN pointed out the holes in Trump’s tweet, he posted a string of tweets bashing CNN.

One year later, his Twitter feed is still a mix of anti-media sentiment and sketchy information.

Over the weekend he derided CNN while favorably linking to a web site called MAGAPill.

The Weekly Standard, a reputable conservative news source, called MAGAPill a “sycophantic website that traffics in conspiracy theories and has aligned itself to the alt-right and white nationalist movements.”

When Trump saw the link to the MAGAPill list of his accomplishments, he wrote, “Wow, even I didn’t realize we did so much. Wish the Fake News would report!”

On Monday morning, as a pivotal week of tax bill lobbying loomed on Capitol Hill, Trump stepped up his game, tweeting, “We should have a contest as to which of the Networks, plus CNN and not including Fox, is the most dishonest, corrupt and/or distorted in its political coverage of your favorite President (me). They are all bad. Winner to receive the FAKE NEWS TROPHY!”

Later in the morning, MSNBC’s Joe Scarborough fired back when Trump posted an item making fun of the fact that “Morning Joe” pre-taped its post-Thanksgiving episode but played it off like a live episode.

“The good news is that their ratings are terrible, nobody cares!” the president said.

“You care. Oh, how you care so much,” Scarborough said, adding a sarcastic emoji. (Scarborough later deleted his tweet.)

From time to time, throughout Trump’s presidency, there have been these flashpoints — periods where he tweets insults at the national news media, advising his supporters not to believe what they read and hear.

Fox’s Laura Ingraham, for example, played along with Trump’s idea for a “fake news” contest: “This is really funny. From your favorite host (me).”

The BBC’s Katty Kay called it “the reality TV show presidency in action.”

Podcaster Ana Marie Cox may have had the best response of them: She wrote, “I still can’t believe this is real life.”