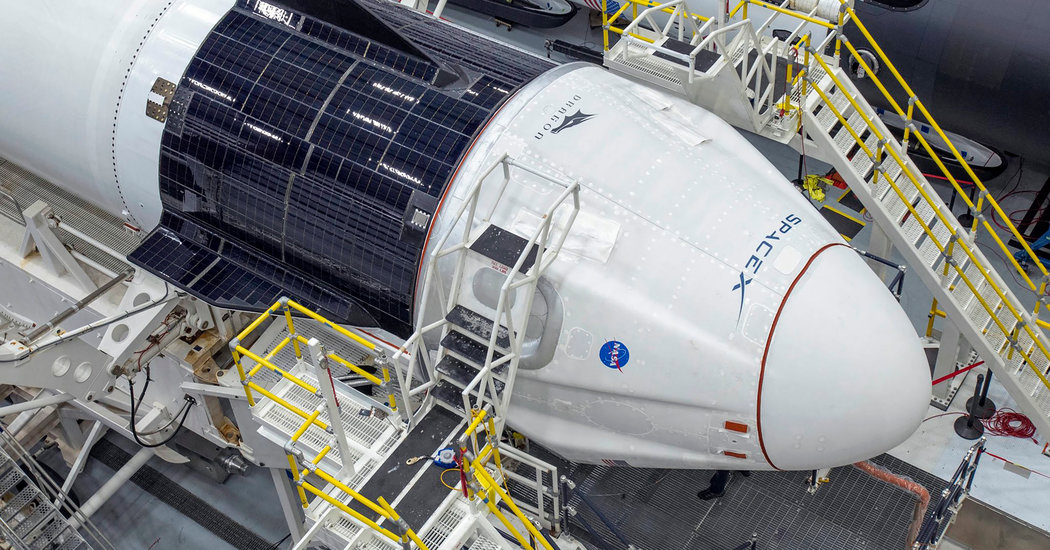 NASA officials gave the go-ahead on Friday for SpaceX and the agency to continue preparations for a historic liftoff of two astronauts on a rocket from Florida to the International Space Station next week.

The launch, scheduled for 4:33 p.m. on Wednesday from NASA’s Kennedy Space Center, may be the start of a new era in spaceflight, one in which NASA relies on private companies like Elon Musk’s SpaceX to launch astronauts — a task it used to handle itself.

We are go for launch! The Flight Readiness Review has concluded and @NASA‘s SpaceX Crew Dragon mission is cleared to proceed toward liftoff. pic.twitter.com/G1XdJVAxmv

President Trump suggested on Thursday that he might attend the launch.

As during the space shuttle era, NASA conducts what it calls a flight readiness review about a week before launch to ensure that the spacecraft and launch systems are ready and that any significant concerns have been resolved.

While the mission is proceeding smoothly, the decision to move forward came amid new turmoil at NASA. The head of the agency’s human spaceflight program, Douglas L. Loverro, unexpectedly quit on Monday, six months after he took the job. Mr. Loverro, who was to lead the flight readiness review on Friday, said in an interview with The Washington Post that his departure had nothing to do with next week’s mission but that it added to doubts about the Trump administration’s pledge to return astronauts to the moon by 2024.

This is the second upheaval in less than a year. In July, Jim Bridenstine, the NASA administrator, reassigned William H. Gerstenmaier, who had led the agency’s human spaceflight program since 2005.

Stephen Jurczyk, the associate administrator at the space agency, led Friday’s review instead of Mr. Loverro.

Two NASA astronauts, Douglas G. Hurley and Robert L. Behnken, will be riding inside SpaceX’s Crew Dragon capsule on top of a Falcon 9 rocket. They will arrive at the space station the next morning. Their stay in orbit was originally planned for just two weeks but will now be extended, because the station is short-staffed.

NASA considers next week’s mission a demonstration to test and verify the spacecraft’s capabilities. If all goes as planned, the first operational flight of a Crew Dragon is scheduled for later this year, carrying four astronauts.

For nearly nine years, after the retirement of the space shuttles, the United States has relied on Russia to provide transportation of astronauts to and from the International Space Station. NASA had been developing its own new rocket, called the Ares I, but with cost overruns and delays, the Obama administration decided that it would be cheaper and faster to turn to private companies. In 2014, NASA chose Boeing and SpaceX, with hopes that the first launches would occur by 2017.

Using SpaceX’s Crew Dragon and Boeing’s Starliner capsule did prove much cheaper than NASA’s original plan, but was perhaps no faster in terms of development. However, the new commercial spacecraft also open up the possibility of space travel to an increasing number of private citizens with the desire and wealth to leave Earth, at least for a short period of time.

NASA is looking to take a similar commercial approach to its next moon missions. The agency recently chose to finance design work on three lunar lander proposals that may be used for a 2024 mission. Mr. Loverro’s resignation on Monday may involve those contracts.

The agency provided no explanation for his departure, but in an email to colleagues in NASA’s human exploration and operations directorate, Mr. Loverro said he took “a risk earlier in the year because I judged it necessary to fulfill our mission” and that now it was clear the risk was a mistake “for which I alone must bear the consequences.”

In March, the NASA inspector general announced an audit of Artemis, the administration’s program to return to the moon.

With Mr. Loverro’s departure, his deputy, Kenneth D. Bowersox, a former astronaut, is again filling in as temporary leader of the human spaceflight program, a role he also played after Mr. Gerstenmaier was reassigned.

Mr. Bridenstine made no mention of Mr. Loverro’s departure on Tuesday morning during a meeting of the National Space Council chaired by Vice President Mike Pence.

“As you announced just over a year ago, we’re going to send not just the next man but the first woman to the South Pole of the Moon by 2024,” Mr. Bridenstine said rosily in a report summarizing NASA’s progress. “And we have been moving forward very rapidly to achieve that end.”