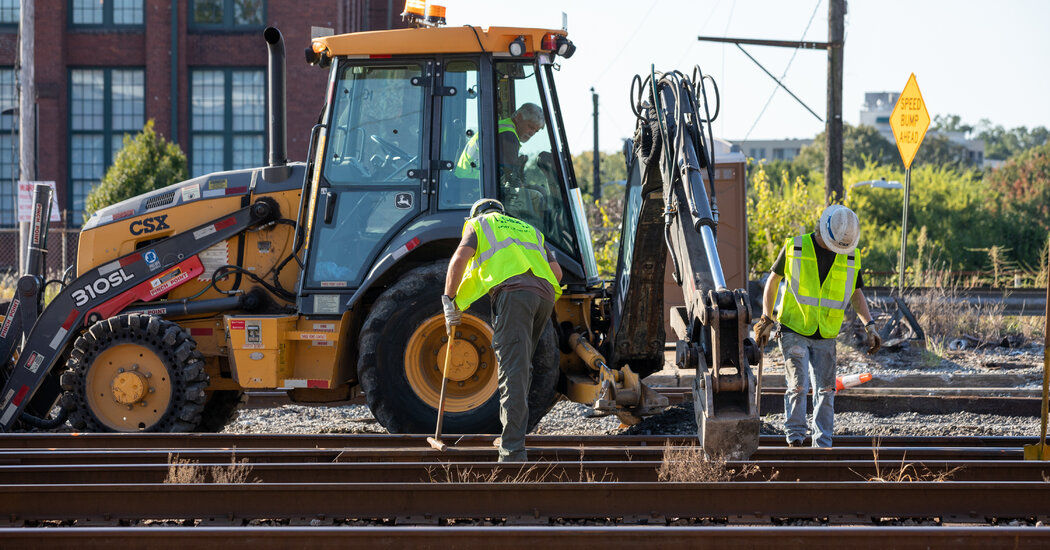 As the legislative representative for his local union, Gabe Christenson, a longtime freight railroad conductor, worked hard to help elect Joe Biden president in 2020. “I have shirts of me campaigning — blue-collar Biden shirts,” he said. “I knocked on doors for him for weeks and weeks.”

But since Monday, when President Biden urged Congress to impose a labor agreement that his union had voted down, Mr. Christenson has been besieged by texts from furious co-workers whom he had encouraged to support the president. “I’m trying to calm them down,” he said.

Mr. Biden said he was taking action to avoid a nationwide strike that would threaten hundreds of thousands of jobs and that the industry estimates would cost the economy more than $2 billion per day.

But for many of the more than 100,000 freight rail workers whose unions have been negotiating a new labor contract since 2020, Mr. Biden’s involvement amounts to putting a thumb on the scale in favor of the industry.

They say the rail carriers have enormous market power to set wages and working conditions, power that is enhanced by a federal law that greatly restricts their right to strike compared with most private-sector workers. They complain that after waiting patiently through multiple procedural steps, including a presidential emergency board, they had a narrow window to improve their contract through a labor stoppage and that Mr. Biden has effectively closed that window.

“They should let the guys work it out for themselves,” said Rhonda Ewing, a signal maintainer in Chicago. “We know it’s holiday time, which is why it’s the perfect time to raise our voices. If Biden gets involved, he takes away our leverage.”

The agreement Mr. Biden asked Congress to impose would raise pay nearly 25 percent between 2020, when the last contract expired, and 2024, and allow employees to miss work for routine medical appointments three times per year without risking disciplinary action. It would also grant them one additional day of paid personal leave.

Averting a shutdown. Congressional leaders vowed to prevent a nationwide rail strike, agreeing with President Biden that it could freeze a critical piece of the economy and potentially fuel further inflation in the United States. Here is what to know:

Why are rail workers threatening to strike? Unions representing tens of thousands of workers said they planned to strike if a labor agreement with the freight rail companies employing them wasn’t reached. The workers are mostly concerned with their grueling, unpredictable schedules that make it difficult to attend medical visits or family events.

What was in that proposal? Under that agreement, new contracts would include a 24 percent increase in wages over five years and a payout of $11,000 upon ratification. Workers would also receive an additional paid day off as well as the ability to attend medical appointments without penalty.

What’s at stake for the economy? Rail freight is the centerpiece of the global supply chain. A strike would slow down the circulation of key goods within the United States and with overseas trading partners. A disruption to the rail transport of crude oil, gasoline and diesel, meanwhile, could push up gas prices and drive further inflation.

It would not provide paid sick leave, however, a provision that many workers argue is the bare minimum they can accept given their grueling work schedules, which often leave them on the road or on call for long stretches of time. Rail carriers say workers can attend to illnesses or medical appointments using paid vacation.

Four of the 12 unions that would be covered by the agreement voted it down, and several others approved it only narrowly.

“If he would have said, ‘I want this one thing,’ it would have changed the whole narrative,” Mr. Cardwell said in an interview on Wednesday.

House Speaker Nancy Pelosi told members on Tuesday night that she would hold a vote on a separate bill that included seven paid sick days, but it was unclear whether it could pass both houses of Congress.

The sense of betrayal is especially acute because Mr. Biden has long portrayed himself as friendly to organized labor, and many union leaders regard him as the most labor-friendly president of their lifetimes thanks to his appointments and his support for regulations and legislation that they favor.

Daniel Kindlon, an electrician who works at a rail yard near Albany, N.Y., and is the head of his local union, said that while he is not a huge supporter of the president, he was impressed when Mr. Biden spoke at the electrician union’s convention in Chicago this spring.

“It was the best 45 minutes I’ve heard him talk,” Mr. Kindlon said. Yet he said he struggled to understand why Mr. Biden couldn’t have pushed Congress to go further.

“You would think he would just try to get them to throw in a couple days of sick time; that’s really all the guys were asking for,” he said.

Several union members and local officials said they had urged co-workers who had previously supported Donald Trump to back Mr. Biden, arguing that they he would be friendlier to labor. They said that these co-workers had reached out to complain about what they saw as Mr. Biden’s about-face since Monday, though it was unclear how many of these union members had voted for the current president.

“Many Trump voters calling me out for endorsing Biden,” said Matthew A. Weaver, a carpenter with rail maintenance employees union, said by text Tuesday night. Mr. Weaver previously worked as an official for his union in Ohio.

Many union members have long suspected that Congress would intervene to prevent them from striking. Mr. Kindlon said several members of his local union abstained from voting on the tentative contract this fall because they didn’t believe their vote mattered. Many took the view that “this is going to get jammed down our throat anyways; why do I care?” he said.

Many who placed their hopes in Mr. Biden assumed that they would not be allowed to strike for very long, but reasoned that even a brief strike lasting several hours, or the mere threat of one, would have been sufficient to extract more concessions from the rail carriers.

“I mean, that would have looked way better,” said Mr. Christenson, the longtime conductor. “Even if he had ulterior motives, let us have our day. He could show he was with us.”

Mr. Cardwell, of the maintenance workers union, said that “the fact that he did it so early” was surprising, given that there was still roughly a week or more to potentially extract concessions before a strike would have occurred.