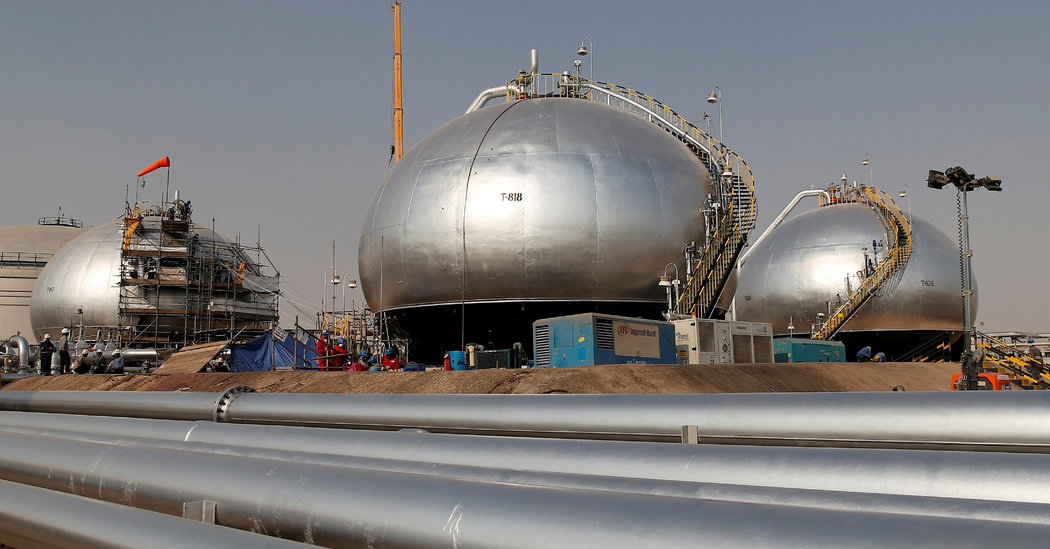 In a year that brought several big I.P.O.s, the world might be about to see the largest stock debut on record.

Saudi Arabia’s state-owned oil company, Saudi Aramco, priced its offering at a level that would raise $25.6 billion, which would surpass the record $25 billion that Alibaba raised in 2014, write the NYT’s Kate Kelly and Stanley Reed.

• It plans to sell three billion shares, or 1.5 percent of the company.

The I.P.O. price values Aramco at $1.7 trillion, which falls short of the Saudi royal family’s hopes for a valuation close to $2 trillion.

Its filings showed Aramco to be immensely profitable: It posted a profit of $68 billion for the first nine months of the year.

But Aramco’s earnings have declined, and risks like global warming and geopolitical instability have cast a pall over its prospects.

• Aramco’s shares are expected to begin trading Wednesday on the Riyadh stock market, the Tadawul.

More: Aramco’s I.P.O. was supposed to help the kingdom diversify away from oil; instead, the Saudis are becoming more leveraged to crude prices. OPEC and Russia agreed to make further small cuts in oil production to firm up crude prices.

The automaker has begun to make good on its promise to bring jobs back to Lordstown, Ohio, announcing yesterday that it would enter a partnership with the South Korean company LG Chem to build an electric vehicle battery factory, Neal Boudette of the NYT reports.

The companies will invest a total of $2.3 billion to set up a plant in the area that would create more than 1,100 jobs. Groundbreaking is expected in the middle of next year.

G.M. is making a major push into electric vehicles, including 20 battery-powered models by 2023. It aims to sell one million such vehicles globally by 2026.

The automaker expects to introduce a new Chevrolet electric car next year and an electric truck in 2021, said Mary Barra, the C.E.O.

• G.M. sells roughly 1,500 Chevrolet Bolts, its full electric car, a month in the U.S., compared with the 30,000 cars Tesla is selling monthly around the world.

Ms. Barra said wages at the battery plant would be around the same levels U.A.W. workers earned at component plants, which tend to fall between $10 and $15 an hour, below the top union wage of $32 an hour. The old Lordstown plant employed about 3,000 people.

More: Italy is demanding that Fiat Chrysler pay $1.6 billion in back taxes, another blow to the company as it tries to complete a merger with Peugeot. And Takata has new problems with airbags, issues that have prompted the recall of 1.4 million cars.

The results of Uber’s long-awaited safety report are in.

Uber said it had reports of 3,045 sexual assaults during its rides in the U.S. in 2018, with nine people murdered and 58 killed in crashes, reports Kate Conger of the NYT.

• The number of incidents represented a small fraction — just 0.0002 percent — of Uber’s 1.3 billion rides in the U.S. last year, the company said.

• There are few comparable figures to judge Uber’s safety record against. The New York Police Department, which keeps a register of sex crimes and rapes that occur on transit systems, counted 533 in 2018.

Even so, “the numbers are jarring and hard to digest,” said Uber’s chief legal officer, Tony West, who led the compilation of the report.

Safety has been a long-running Achilles’ heel for ride-hailing companies. Uber, the world’s biggest, decided to be transparent about cataloging sexual assaults, murders and crash fatalities as it has faced growing pressure over these issues.

Uber and others have introduced more safety features in recent years. The company is using automated technology to regularly check contractors’ driving records and criminal history. Since 2018, it said, it has deactivated 40,000 drivers in the U.S. after they failed those checks.

Its rival Lyft was sued in San Francisco this week by 19 women who say they were sexually assaulted by drivers. The lawsuit is the latest to accuse the company of failing to enact basic safety measures. A Lyft spokeswoman said that it was dedicating more resources to safety initiatives this year, and that in recent months it had introduced more than 15 new safety features.

The Labor Department will release the latest hiring and unemployment figures for November at 8:30 a.m. Eastern time. Here’s what to watch for, the NYT reports.

Job gains are expected to have picked up last month, but the underlying trend might not be quite as strong.

• Wall Street analysts are forecasting a stronger showing than for October, with payroll gains of 180,000, up from the 128,000 initially reported for that month.

• The unemployment rate is expected to be unchanged at 3.6 percent.

• Average hourly earnings are expected to rise 0.3 percent, after moving up 0.2 percent in October. That would bring the year-over-year increase to 3 percent.

However fat — or thin — November’s payrolls gains may look, the jump in hiring will not be as big as the report’s totals might suggest. Nearly 50,000 striking G.M. workers returned to their jobs last month, but were not included in the government’s October surveys.

The job numbers could be further inflated by an additional 12,000 workers at auto suppliers and related businesses, who were out of work because of the G.M. strike and have now been rehired, said Diane Swonk, chief economist at the accounting firm Grant Thornton.

Because of these factors, she and other analysts say, it will be more important than usual to look at the categories where the job gains are the strongest and weakest.

Mark Wiseman, a contender for the top job at BlackRock, the giant money manager, was fired for not reporting a consensual relationship at work, the WSJ reports.

Mr. Wiseman had been steadily rising to power since joining BlackRock in 2016, and he was viewed as a potential successor to Laurence Fink, the company’s C.E.O. and chairman. He is married to a BlackRock executive, but his undisclosed relationship was with a different woman under his reporting line, the WSJ reports, citing unnamed sources.

His exit is the second departure of a high-ranking BlackRock executive in recent months. Jeff Smith, the head of the human resources group, left in July after failing to adhere to company policy.

It is the latest instance of executive misconduct at a major U.S. company. “The abrupt dismissal comes as American corporations continue to grapple with the issue of workplace relationships and concerns over harassment,” the WSJ reports.

• McDonald’s fired its C.E.O., Steve Easterbrook, last month after he engaged in a consensual relationship with an employee that violated company policy. Brian Krzanich resigned as C.E.O. of Intel last year over a relationship with a subordinate.

The firing underscores Mr. Fink’s willingness to make an example of even his top leaders, Bloomberg reports.

“This is not who BlackRock is,” Mr. Fink wrote in a memo with BlackRock’s president, Rob Kapito. “This is not our culture.”

Pete Buttigieg sells his candidacy for the Democratic presidential nomination, in large part, on his mayoralty of South Bend, Ind. His city’s civic revitalization is rooted in the data-driven techniques espoused by McKinsey & Company, the consulting firm where Mr. Buttigieg once worked, reports Michael Forsythe of the NYT.

“His nearly three years at ‘the firm’ set him apart from many of his campaign rivals, underpinning his position as a more centrist alternative to progressive front-runners like Senators Bernie Sanders and Elizabeth Warren,” Mr. Forsythe writes.

But Mr. Buttigieg barely mentions his time at McKinsey: He says he signed an NDA that keeps him from going into detail about his work there. Interviews with people involved in projects that Mr. Buttigieg worked on at McKinsey fill in some of the blanks.

This is an awkward time to be associated with the consultancy, as questions arise over corporate power and wealth inequality. Recent news articles have revealed episodes that have tarnished McKinsey’s once-sterling reputation:

• McKinsey consultants recommended in 2017 that Immigration and Customs Enforcement cut its spending on food for migrants and medical care for detainees, according to a report this week from ProPublica and the NYT.

Mr. Buttigieg’s vow of silence is untenable, writes the NYT editorial board: “Mr. Buttigieg owes voters a more complete account of his time at the company.”

Oscar Munoz will step down as C.E.O. of United Airlines in May and become executive chairman. J. Scott Kirby, the airline’s president, will become C.E.O.

The investment firm KKR has announced the promotions of 13 people to the role of member and 26 to managing director.

• CVC Capital Partners has held talks with FIFA and Real Madrid about funding the creation of global football tournaments. (FT)

• About 42 percent of big mergers are leaked to the news media before they are announced, according to a report. (Bloomberg)

• Google is facing a British investigation into its $2.6 billion takeover of the data company Looker Data Sciences. (Bloomberg)

• President Trump campaigned on reviving West Virginia’s economy. The state is forecast to have the worst-performing economy in the U.S. over the next six months. (Bloomberg)

• Nearly two-thirds of Americans say this year’s market rally has had little or no effect on their personal finances. (FT)

• Joe Biden lashed out at a voter at a campaign stop in Iowa who questioned his son’s overseas business dealings, calling him a “damn liar.” (NYT)

• Speaker Nancy Pelosi said that the House of Representatives would begin drafting impeachment articles against President Trump, a move that could set up a vote before Christmas. (NYT)

• For months, Ms. Pelosi had resisted calls for impeachment. Then she saw an explosive headline. (NYT)

• The Ukrainian president’s political opponents worry that the impeachment inquiry may have weakened Ukraine’s position before peace talks in Paris next week. (NYT)

• Rudy Giuliani, whose work in Ukraine is at the heart of impeachment proceedings, is back in the country — and Kyiv officials appear to be keeping their distance. (Bloomberg)

• The U.K. labor market is freezing amid uncertainty around Brexit and national elections. (Bloomberg)

• In the U.K. elections, there is more on the line than Brexit — the British economy’s path forward is also at stake. (Bloomberg)

• The Trump administration has formally objected to the World Bank’s plans to continue lending to China. (NYT)

• China said it would waive import tariffs for some shipments of soybeans and pork from the U.S. (Reuters)

• How Chuck Robbins, a preacher’s grandson from rural Georgia, grew up to lead Cisco. (NYT)

• TikTok is increasing its ad spending in the U.S. to compete with Facebook. (FT)

• Despite Big Tech’s efforts to combat manipulation, companies that sell clicks, likes and followers on social media are easy to find. (NYT)

• Courts are starting to challenge the idea that tech giants are mere platforms connecting buyers and sellers. (WSJ)

• A union has filed a federal labor charge against Google, accusing it of illegally firing workers to stifle unionism. (Reuters)

• With the life coach Tony Robbins filing a libel suit against BuzzFeed in Dublin, the Irish capital is becoming known as a destination for such legal actions. (FT)

• The billionaire Eli Broad is giving the Broad Center, a Los Angeles-based organization he founded, $100 million to support its move to New Haven, Conn., to become part of the Yale School of Management. (Bloomberg)

• Germany’s industrial production unexpectedly continued to decline, raising concerns that early signs of a revival may be premature. (Bloomberg)

• Biogen released more-detailed data from its trials of its prospective dementia drug aducanumab, which it once abandoned, in efforts to win over skeptics. (FT)

• Companies are more likely to correct accounting problems by quietly updating past numbers, rather than alerting investors and reissuing financial statements. (WSJ)

• A Virginia county has spent $35 million to $40 million trying to reinvent itself since the downturn of the coal industry. It hasn’t helped. (NYT)

• Citigroup’s private bank tells its wealthy clients to stop worrying about stocks: Next year will be “brighter than many expect.” (Bloomberg)

• Hundreds of millions more surveillance cameras will be watching you in 2021. (WSJ)

Thanks for reading! We’ll see you next week.