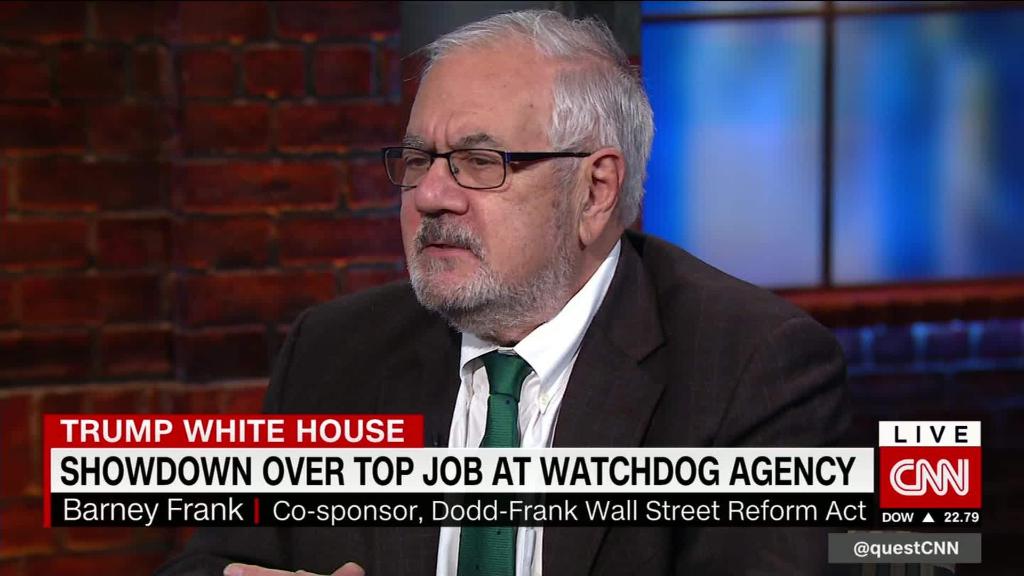 President Trump argues that the Consumer Financial Protection Bureau is a “disaster” that has “devastated” banks and hurt Americans by stifling loans.

Mick Mulvaney, the official Trump installed as the agency’s acting director, claimed on his first day that the CFPB is “trampling on capitalism” by “strangling access” to loans.

Yet Republicans’ description of the CFPB as a renegade regulator handcuffing banks doesn’t match up with reality.

The CFPB has enacted rules to safeguard consumers from financial predators, but there’s little evidence those rules are crippling the economy. In fact, America’s banks are hauling in record profits, and households have more debt than ever before. Bank loans to businesses are also at all-time highs.

Not to mention that the U.S. economy has grown at a healthy 3% pace the past six months, and the stock market has never been higher.

“They talk about an agency that is out of control, it’s a bureaucratic monster. You would think there would be some horror stories,” Barney Frank, a Democratic former congressman and one of the authors of the Dodd-Frank law, which created the CFPB, told CNN on Monday.

The Consumer Financial Protection Bureau, or CFPB, has been a total disaster as run by the previous Administrations pick. Financial Institutions have been devastated and unable to properly serve the public. We will bring it back to life!

Related: CFPB drama What happens to its open investigations?

It’s true that the CFPB has moved to crack down on risky mortgages, prevent shady payday lending and penalize big banks like Wells Fargo (WFC) for breaking the law.

Yet U.S. banks made $171.3 billion in profit last year, their third record in the past four years, according to the FDIC. Bank profits are on track for another record in 2017, and just 3.9% of banks suffered losses during the third quarter.

“The banks are doing just fine,” Richard Cordray, the Obama-appointed former director of the CFPB, told CNN on Tuesday. “The question is: Will someone be looking over their shoulders to make sure they do things the right way?”

There’s no question that Dodd-Frank, the post-crisis law that created the CFPB, forced banks to spend heavily on consultants and technology as well as curtail risky activity that may have been lucrative in the past. And even Barney Frank has admitted Dodd-Frank may have unfairly hurt some smaller banks.

Still, Trump has painted a dire picture that doesn’t jibe with the numbers. For instance, he said in February that “many friends of mine who have nice businesses” can’t get loans because of Dodd-Frank.

Yet banks are lending plenty of money to businesses.

Commercial and industrial loans from commercial banks hit an all-time high of $2.1 trillion in October, according to the Federal Reserve. That’s nearly twice as many as much in business loans as banks had on their balance sheets in July 2011, when the CFPB opened its doors.

It is true that bank loans to businesses have slowed to a near-halt in recent quarters. But financial analysts don’t blame the CFPB for that.

Harvey Lei, a Bloomberg Intelligence analyst covering U.S. regional banks, said possible reasons for the slowdown include “uncertainty” among businesses about the Trump administration’s tax proposals and an ability to borrow even more cheaply from the bond market.

“It seems like the supply of loans is there,” Lei said. “The demand is less clear from clients.” He said the CFPB is “definitely not” to blame.

Related: Why Wall Street and the GOP hate the CFPB

Americans have more debt than in 2008

Mulvaney, who as a member of Congress voted to kill the CFPB, said he wants the agency to “protect people” without “choking off access to financial services that are so critical to many folks.”

But Americans don’t seem to be having trouble taking on more debt. Total household debt reached an all-time high of $12.96 trillion during the third quarter, according to the New York Federal Reserve.

Americans now have $280 billion more debt than they did during the prior peak in 2008. Household debt has climbed 16.2% from the low point in 2013, the Fed says. Consumer confidence hit a 17-year high in November, according to the Conference Board.

Yet the New York Fed recently said that a record 107 million Americans have auto debt. They took out $150.6 billion worth of car loans in the third quarter, “among the highest” the New York Fed has ever seen.

Housing is recovering despite mortgage crackdown

The CFPB’s restrictions on mortgages have been unpopular among some in the real estate industry. For instance, the CFPB’s qualified mortgage rules banned risky loans such as “interest-only” and “negative amortization” mortgages.

And it’s true that mortgages have not recovered to pre-crisis levels. Just over 2 million mortgage loans were issued during the second quarter of 2017, compared with a peak of 4.2 million in 2006, according to Attom Data Solutions, formerly known as RealtyTrac.

While the CFPB may be having a “chilling effect” on some mortgage loans, Attom senior vice president Daren Blomquist agrees that much of this is “self-imposed.”

“A lot of big banks got burned by the housing bubble and are voluntarily taking on more restrictive lending practices,” he said.

It’s also hard to argue the housing market is in shambles. New numbers released this week show that new home sales hit a seven-year high in October and home prices rose at their fastest pace since mid-2014.

“To the extent that the market has a short memory, the CFPB is there to hold it in check,” Blomquist said.