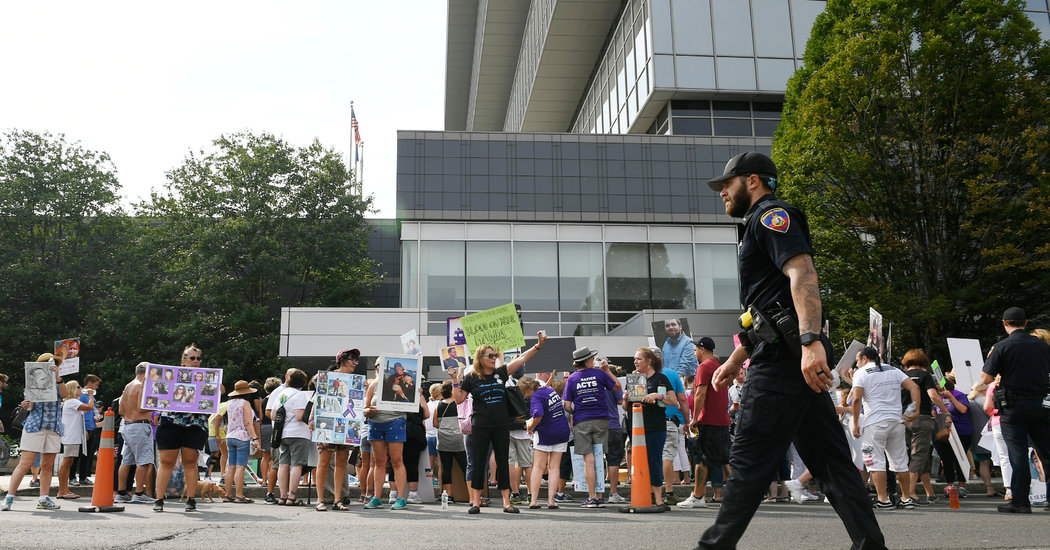 As talks escalate to settle thousands of opioid-related lawsuits nationwide, a harsh reality is emerging: the money the pharmaceutical industry will pay to compensate ravaged communities will likely be far less than once envisioned.

Lawyers on all sides have been stepping up efforts to reach a national agreement before the start of a New York trial next month. But even plaintiff lawyers now believe the payout from dozens of opioid makers, distributors and retailers is likely to be less than half of what the four Big Tobacco companies agreed to pay more than 20 years ago in a landmark settlement with states over costs associated with millions of smoking-related deaths.

Whatever the final amount, it will certainly fall well short of what public health experts say is needed to heal the long-term effects of the opioid crisis.

The tobacco settlement of 1998 totaled more than $206 billion over 25 years. When pressed to name the dollar figure he was swinging for, Joe Rice, the chief negotiator for thousands of cities and counties suing the pharmaceutical industry who was also instrumental in wresting the tobacco settlement, conceded in an interview: “People would say I was crazy if I thought we could get over $100 billion.”

Eric Percher, a senior analyst who follows the litigation for Nephron Research, an independent investment research firm, recently predicted that the total would end up between $75 billion and $85 billion.

Estimates vary wildly over just how much money it would take to finance the treatment and prevention programs, emergency services, law enforcement and other measures needed to fix the problems created by opioids. In October, the federal Council of Economic Advisers said that during the four-year period from 2015 through 2018, the economic toll from opioids was more than $2.5 trillion, including the cost of health care and law enforcement, and estimates of lost productivity.

The idea that some of the biggest American corporations would not be made to cover a substantial portion of the opioid bill defies common sense to some people. But analysts and lawyers said the calculus to reach these settlements was even trickier than it was with the tobacco settlement.

For starters, four cigarette companies produced a single product — one whose dangers were undisputed. But prescription opioids are beneficial for some patients. In addition, the dozens of companies targeted in the opioid lawsuits “do some very good things,” said Mr. Rice, including making or selling an array of medicines, vitamins and medical devices as well as drugstore products like shampoo and baby lotion.

They include the health and consumer products giant Johnson & Johnson; some of the world’s largest makers of generic medicines; the huge drug distributors McKesson, AmerisourceBergen and Cardinal Health; and the national pharmacy chains, including Walgreens, CVS and Walmart. Opioids usually represent only a sliver of their business. Even plaintiffs’ lawyers say it may not be in the public interest to squeeze the companies too tightly.

Lawyers and economists also say that pharma will most likely pay less than Big Tobacco because, by one crude measure, its damage is smaller: prescription painkillers have claimed far fewer lives than cigarettes.

According to the Centers for Disease Control and Prevention, about 218,000 people died from overdoses related to prescription opioids from 1999 through 2017. But each year, more than 480,000 people die from causes directly related to smoking or secondhand smoke.

Another challenge: apportioning blame. For cigarettes, that issue was relatively straightforward. The tobacco companies were almost entirely responsible for the manufacture, marketing, distribution and product placement of cigarettes. While the government could ban sales to minors, it had little authority to regulate marketing and distribution of tobacco until 2009.

But medications pass through many types of businesses. The defendants argue that the federal government bears blame too, because the Food and Drug Administration approved opioids for the market and the Drug Enforcement Administration was supposed to be monitoring sales and distribution.

Until recently, a broad national opioid settlement seemed elusive. Since 2013, when the first municipal lawsuits were filed, the defendants largely refused to negotiate. But now, continuing bad publicity, legal expenses in the hundreds of millions and the imminent specter of jury trials have begun to force defendants’ hands. March 20, the start of the trial between New York State and two counties against manufacturers and distributors, looms large. Other trials are on the runway this year in Tennessee, California and Ohio.

So far, only two offers for a nationwide settlement have been disclosed. One offer, from Purdue Pharma, the maker of OxyContin, is valued by the company at about $10 billion, including at least $3 billion in cash from the members of the Sackler family, the owners. It has been tentatively accepted by about two dozen states and thousands of local governments, but is far from final.

Another proposal, ostensibly worth $48 billion, is from the three drug distributors and two manufacturers (Teva and Johnson & Johnson), much of it to be paid over 18 years. But nearly half that figure is an in-kind assessment of the value of addiction treatment drugs and distribution services that the companies pledge to provide.

Twenty-one states and lawyers negotiating for cities and towns have called the proposal too skimpy, with too long a timetable for communities that need help immediately. Last week, they called for further talks.

A lawyer for one state supporting the offer, who spoke on the condition of anonymity because discussions were confidential, said that these numbers were the best negotiators could extract.

“If we could have gotten more, we would have,” the lawyer said, “and this is way more than the companies came to the table with.”

The financial model of the tobacco settlement took into account the prediction that rising prices and taxes on cigarettes would fund payouts over time. But that structure cannot sustain an opioid settlement that hopes to fund decades of research and treatment because the production of opioids is expected to decline precipitously and prices are not expected to rise.

So which defendants have the means to make a significant impact on recovery efforts?

The distributors argue that they do not have much extra cash. Mr. Percher, a former director of strategic finance at McKesson, explained that while McKesson’s U.S. pharma and specialty division would generate $190 billion in revenue in 2020, making it eighth on the Fortune 500 list, its operating profit would total just $2.8 billion, or 1.47 percent, which wouldn’t even place it among the top 100 companies.

The manufacturers present more of a mixed bag. Johnson & Johnson, despite its swarm of legal woes, is doing fine. But several makers of generic opioids carry a lot of debt and have weak bond ratings, analysts say.

The status of Teva, which makes generic and branded drugs and has struggled with debt, is less clear. In October, the company proposed settling claims by paying $250 million in cash and donating treatment drugs — which the company estimates to be worth $23 billion — over 10 years. Critics say that estimate is wildly inflated.

Ronny Gal, an analyst at Sanford C. Bernstein, an investment research firm, said Teva’s recent earnings report suggested it could afford to pay more. “Teva will generate at least $2.5 billion in cash each year for the next five years,” he said. He estimated that it could pay $4 billion in cash “without material difficulties.”

Two companies that manufacture branded opioids, Insys Therapeutics, the maker of a fentanyl spray, and Purdue Pharma, are now in bankruptcy court, each struggling over restructuring plans to manage payouts, a model also being discussed as a possibility for some manufacturers.

The biggest unknown is how much the pharmacy chains can or should pay. Financially, this is the healthiest group of defendants. Their first trial, brought by two Ohio counties, is scheduled for November.

The chains are mostly being sued based on the quantity of opioids they distributed to their own pharmacies. Mr. Percher, the Nephron Research analyst, said that if the chains paid a figure proportional to what the national distributors offered, it would be about $13.8 billion.

“Could it be higher, given that they also dispensed the pills to the consumer?” he said. “Yes.”

The delay in reaching a broad agreement has been due in some measure to sharp divisions among the many constituencies of plaintiffs themselves. Thousands of local governments view the states suspiciously, bitter because Big Tobacco settlement money largely wound up being diverted to state coffers.

The states that support the offer say that a major roadblock is the fee demanded by private lawyers who work both for some states and local governments. “We need to focus on getting dollars into treatment for those suffering, not into the pockets of lawyers,” said Josh Shapiro, the attorney general of Pennsylvania.

Mr. Rice scoffed at that notion, saying that the real impediments are the amounts offered by the opioid defendants.

“We don’t want these companies to go out of business,” he said. “But we want them to pay for what they did.”