The largest U.S. pay-TV providers, representing 95% of the market, lost nearly 1.5 million subscribers combined last year, according to a report from Leichtman Research . If you don’t count linear TV streaming services like DISH Network ‘s (NASDAQ: DISH) Sling TV or AT&T ‘s (NYSE: T) DIRECTV Now, they lost more than twice as many subscribers. The 1.5 million subscriber loss represents 1.6% of total subscribers, an acceleration from the 0.8% loss in 2016.

Leichtman’s numbers notably don’t include streaming subscribers to other services like Hulu Live and YouTube TV, which garnered 500,000 and 350,000 subscribers, respectively, by the end of 2017, according to estimates from BTIG. Even after adding those numbers back in, it’s evident more people are abandoning the cable bundle than ever before.

Here’s a roundup of the winners and losers in the increasingly shrinking and competitive pay-TV industry. 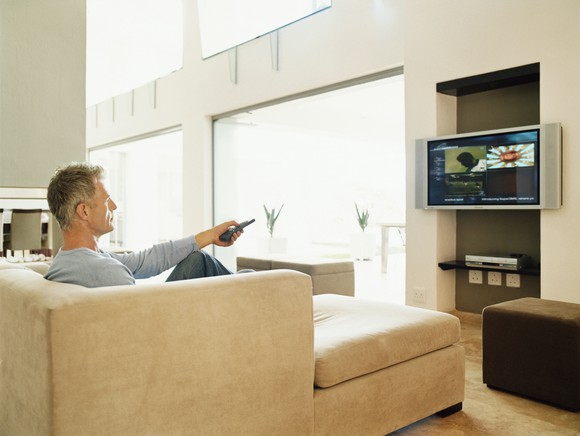 The two main satellite TV providers — DISH Network and AT&T’s DIRECTV — combined to lose over 100% of the total net losses in the industry (when including streaming additions). DISH lost nearly 1 million subscribers and DIRECTV lost over half a million.

With retention rates slipping, making a big up-front investment in a customer makes less and less sense, which is why the satellite companies are still requiring two-year commitments from customers while cable is no longer tying customers down with contracts.

That said, AT&T management has repeatedly told investors DIRECTV Now is not a replacement for DIRECTV. Instead, it’s seen as a way to reach a new audience. Indeed, 50% of DIRECTV Now customers are new to the pay-TV ecosystem .

AT&T’s legacy U-Verse dragged down phone company video subscribers, accounting for 70% of the losses in the group. Over the last two years, U-Verse TV subscribers have fallen from 5.6 million to 3.6 million, a 36% decline. At this rate, there won’t be any U-Verse subscribers left in five years.

And perhaps that’s AT&T’s plan. It’s more often bundling its wireless service with satellite or DIRECTV Now instead of its legacy television service. AT&T didn’t give any specifics on how U-Verse fits into its video strategy with DIRECTV and DIRECTV Now.

While the traditional cable players like Comcast (NASDAQ: CMCSA) and Charter Communications (NASDAQ: CHTR) didn’t escape 2017 unscathed, they lost considerably fewer subscribers than satellite and phone companies (both in absolute and relative terms).

Comcast, in particular, saw considerably stronger retention rates than the rest of the industry. Management says that’s largely owed to its X1 set-top box and its willingness to incorporate streaming video on demand services into its platform.

2017 saw the launch of two major streaming TV platforms in Hulu Live and YouTube TV. Those followed on the tail of DIRECTV Now, which launched at the end of 2016. DISH’s Sling TV became so big, the company felt compelled to release subscriber details for the first time in its fourth-quarter earnings.

Content costs eat a large portion of revenue for the streaming services, and other cost of revenue and operation costs completely erase the profits. While there may be some room to grow advertising revenue or sell high-margin add-ons, streaming services still don’t look to be producing much in the way of profits right now.

More and more people are cutting the cord, and the competitive nature of the industry is forcing companies to take smaller margins. That’s most evident in the companies like AT&T and DISH, which are actively pushing streaming services to offset their traditional subscriber losses.

There doesn’t appear to be an end in sight for cord-cutting, and the rise of streaming services to replace traditional TV isn’t very sustainable for TV operators, especially as new competitors like Hulu and YouTube enter the market.

10 stocks we like better than AT&T
When investing geniuses David and Tom Gardner have a stock tip, it can pay to listen. After all, the newsletter they have run for over a decade, Motley Fool Stock Advisor , has tripled the market.*

David and Tom just revealed what they believe are the 10 best stocks for investors to buy right now… and AT&T wasn’t one of them! That’s right — they think these 10 stocks are even better buys.