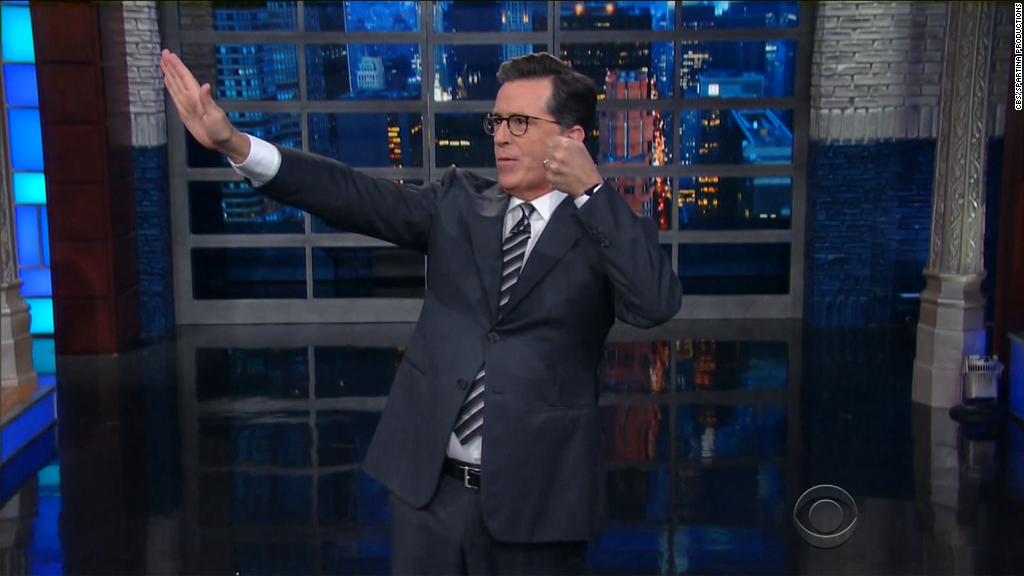 Presidents are inevitably targets for late-night comedy; Donald Trump has become something more. He has inspired a new form of late-night performance: comedy-outrage.

For six months, late-night hosts have pilloried the President for a long litany of incidents ripe for satire, from shoving a prime minister out of the way to attacking his own attorney general. The past weekend’s events in Charlottesville sparked an unmistakable outpouring of comedic rage, because the President was so late and, to many observers (including most of the roster of late-night hosts) so wishy-washy in expressing his disapproval of groups promoting things as egregiously and indisputably wrong as racism, anti-Semitism, and neo-Nazism.

It was the nadir, according to Seth Meyers of NBC, who has been probably the most ferocious critic of the President in late night.

“In a Presidency that has essentially just been an uninterrupted series of low moments,” Meyers told his audience Monday, “this weekend was the lowest yet. We shouldn’t have to shame or press the President of the United States to say Nazis are bad.”

Shame and disbelief were recurring themes on late-night shows the past two nights, as the hosts hurled words at Trump as if they were disgusted editorial writers. Two hosts, Meyers and ABC’s Jimmy Kimmel, openly called Tuesday for Trump to be cut loose from the Presidency.

“I think this is the angriest I have been,” Meyers told CNNMoney in a phone interview Tuesday. Meyers said he felt he had to address his audience with a personal message before his show Monday because it might have sounded “tone deaf” to go right at an issue this searing with a comedy monologue.

Meyers acknowledged that his show has trained critical fire on the Administration “night after night.” But he said something in Trump’s response to the frightening events of the weekend, which Meyers characterized as “mealy-mouthed,” raised his emotions to a different level.

Kimmel, based in Los Angeles, had the most time to frame his comments between his tape time and Trump’s Tuesday news conference, which took place just before the time at which the East Coast -based shows tape. Arguing that there is more than enough evidence of the need for Trump to go, he offered a thorough, and passionately sincere, recital of how Trump “screws up royally every day, sometimes two or three times a day. Every day there’s something nuts!”

Kimmel’s list, 17 items long, included everything from starting a fight with the mayor of London the day after the city suffered a terror attack to “not knowing Frederick Douglass isn’t alive.”

The events of the past few days clearly made people whose lives revolve around being funny come to grips with a very sober side of the state of affairs in the country. Jimmy Fallon of “The Tonight Show,” who had been criticized from some quarters for with having been too soft during Trump’s appearance on “Tonight” back during the campaign, felt compelled on this occasion to speak out in a way he has not before on his show — and it was his own personal call to step up and do so, according to a person familiar with the production. In what amounted to a separate address to his viewers before his monologue Monday night, Fallon declared that his young daughters, like all young people in the country, need leaders to look up to, “and the fact that this President took two days to clearly denounce racism and white supremacy was shameful.”

“Shameful” is not generally in a comic’s go-to vocabulary. But something about Trump’s limp response on Monday and then his news conference on Tuesday let loose a torrent of commentary that went far past satire and reached down into personal animus.

No previous incident, at least in my recollection, ever inspired an entire chorus of late-night stars to unleash this kind of fury of contempt on a personal level toward a sitting President. When Johnny Carson came out against the Vietnam War it was a turning point in the nation’s opinion on that conflict, but he didn’t call out Lyndon Johnson in personal terms the way Kimmel did Trump on Monday:

“We went into the weekend worrying about Kim Jung-Un starting a war and came out of it wondering if our President is cutting eyeholes out of his bedsheets.”

Or the way Stephen Colbert did on CBS, comparing how quick Trump was to fire off a shot at CNN’s Jim Acosta to his slowness to condemn white supremacists: “Sir, you see how you condemned CNN right off the top of your head with no script? Next time, like that…but with Nazis.”

Late-night hosts have on numerous occasions of national trauma or tragedy taken a moment to address their viewers in a heartfelt way, as they all did after the 9/11 attacks, but those were meant as healing words, not fighting words.

The closest comparison to this episode is probably the commentary in the aftermath of Hurricane Katrina and the devastation it wrecked on New Orleans. Then-President George W. Bush took a shellacking for his tepid response in that instance, most powerfully from Jon Stewart on “The Daily Show.” Stewart called it “inarguably a failure of leadership” and called Katrina “George Bush’s Monica Lewinsky,” saying, “One difference, and the only difference, is that tens of thousands of people weren’t stranded in Monica Lewinsky’s vagina.”

But Stewart always stood out for his outspoken political commentary — it was an essential function of that show. Rob Burnett, the long-time executive producer for David Letterman, told me in an email, “Nothing comes to mind where every host lambasted a president or anyone else with such uniform vitriol.”

He said the late-night shows of the past, Like Letterman’s, Carson’s, and Jay Leno’s, made mostly “toothless” political jokes, meant to elicit laughs but not to change minds.

“These shows have become about something,” Burnett said. “They are doing real political commentary. Dave and Jay (and Carson) weren’t out to accomplish anything political. This current crop I believe are actually making a difference, changing opinions, shaping public discourse.”

Colbert and Meyers have been the closest to Stewart in terms of wearing their opinions about political behavior on their sleeves. (“The Daily Show” with Trevor Noah does not have new shows this week.) Colbert has grabbed the largest audience in late night with his unrelenting — and unquestionably sincere — assault on Trump. Meyers has elevated his own performance with unapologetic skewering of the President.

Will any of these late-night assaults will make any difference? Meyers, for one, granted during his interview with CNNMoney that his own audience is surely now bereft of Trump voters, who by now must be completely aware of the host’s point of view on this President. But he said he felt the events and the President’s comments themselves ought to be sinking in nationally by this point.

“I know a lot of people say they are not racists and they voted for Trump for other reasons,” Meyers said. “I’m just saying the next time you vote for him, you know who you’re voting for.”

Kimmel directly addressed Trump voters in his long diatribe against the President on Tuesday. He said he understood that some people had been looking for an outsider to shake up politics, bring sweeping changes to institutions. “You pick a horse; it’s 35 to 1 and it pays off!”

But now: “You’ve been trying to ignore it — because you don’t want to admit — that these smug, annoying liberals — were right! It’s the last thing you want to do. But the truth is — and deep down inside you know you made a mistake, you know this is true — you made a mistake. You picked the wrong guy.

“So you can do one of two things — you can dig in like Chris Christie at a Hometown Buffet — or you can treat this situation like you would if you put ‘Star Wars’ wallpaper up in the kitchen. ‘All right, I got caught up, I was excited, and I made a mistake.’ And you can say, ‘Hey, you know what? He needs to go.’ Well now he does need to go.”