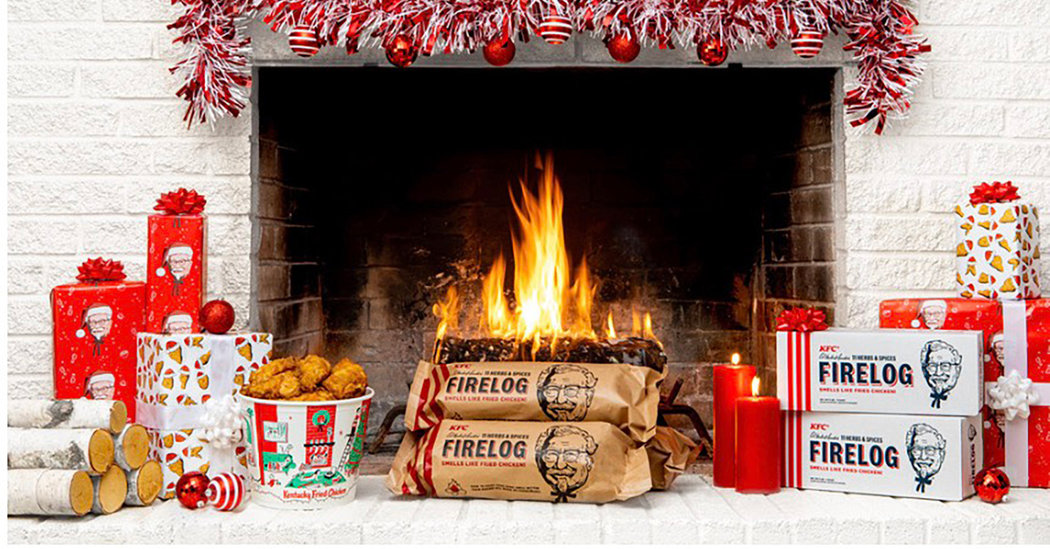 The sights and sounds of the holiday season are familiar to us all: snow falling gently outside, stockings overflowing with gifts, “White Christmas” playing softly in the background.

Now imagine that scene, except the whole house smells like Kentucky Fried Chicken.

That’s the vision of holiday cheer that K.F.C. is hoping to sell this month, with the release of a branded log designed to create a “warm fried chicken-scented fire” on the hearth.

When K.F.C. launched the logs in 2018, the chain sold its entire supply online in three hours, according to a company representative. This year, the logs are available at Walmart for $18.99, in what the retailer describes as a limited-time deal. K.F.C. would not say how many logs are available.

K.F.C. designed the log in a partnership with Enviro-Log, a company that makes sustainable firewood substitutes from recycled waxed cardboard.

In a statement, K.F.C.’s chief marketing officer in the U.S., Andrea Zahumensky, said the chain had received “weekly calls from hopeful fans” desperate for the return of the log. “We hope you’ll cuddle up with your family or friends with a bucket of our world-famous fried chicken and a warm fried chicken-scented fire this holiday season,” Ms. Zahumensky said.

The release of the scented log marks a fitting conclusion to a busy year of fried-chicken marketing. In August, a seemingly innocuous post on Twitter by the Popeyes social media team set off the “chicken sandwich wars,” as Chick-fil-A and other chains jockeyed to assert their products as the best. And in five hours on a Tuesday at the end of August, K.F.C. sold its entire test supply of chicken-less fried chicken developed by the plant-based meat company Beyond Meat.

Nor is this the first time that a fast-food chain has attempted to cash in on Christmas. McDonald’s is offering a branded Christmas sweater. Dunkin’ is selling peppermint-scented wrapping paper.

The unveiling of the scented logs drew immediate ridicule on Twitter from critics who called it a new low in Christmas marketing. “Hoping also to find a candle that smells like someone cooking salmon in the staff microwave,” one user said.

Still, the product has at least one important advantage over homemade alternatives, according to Walmart. The log, the retailer’s website states, is significantly less wasteful than “burning actual fried chicken.”

But Walmart also urges caution: While the burning log may smell like fried chicken, it would be inadvisable to attempt to eat it.

“Please,” the website says, “do not put your face directly into the fire.”