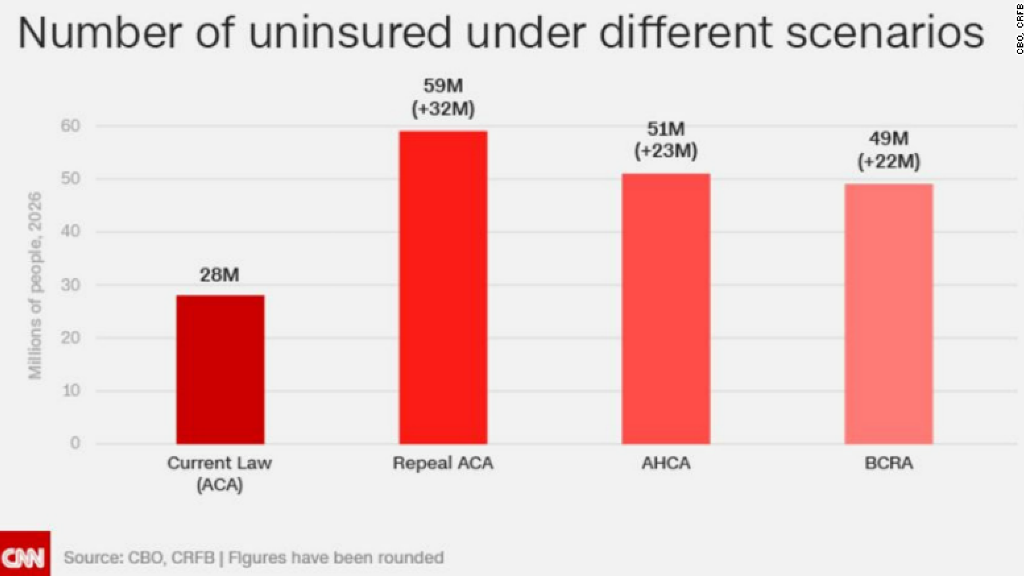 Republicans are in turmoil over how to fulfill their longstanding pledge to get rid of Obamacare. Senate Majority Leader Mitch McConnell this week revived the notion of simply repealing Obamacare, but delaying it from taking effect for two years while lawmakers come up with a replacement plan.

House Republican leaders had cast aside an attempt to do this earlier this year after encountering stiff opposition from fellow lawmakers and others, who said it was critical to come up with a replacement bill at the same time.

On Wednesday, the Congressional Budget Office reminded GOP lawmakers why. It released an analysis of a new Senate repeal-only bill that was chock-full of losers, with only a handful of winners.

The most negative headline: The bill, called the Obamacare Repeal Reconciliation Act, would leave some 32 million more people uninsured by 2026 than under current law.

What do you want Congress to do about Obamacare? Write me at healthcarestories@cnn.com and you could be featured in an upcoming article.

Here’s who would lose out under a repeal now, replace later scenario:

Most of America couldn’t buy policies: The bill would quickly destabilize the individual market, the CBO found. Some healthier people would forgo coverage since they wouldn’t face a penalty, leaving insurers with sicklier and costlier policyholders. This, combined with the lack of clarity over how Congress would eventually replace Obamacare, would prompt some insurers to start pulling out next year.

By 2026, three-quarters of the nation would live in areas with no insurers participating in the individual market — leaving many without an option if they do not have employer-provided or government health insurance, such as Medicare or Medicaid, according to the CBO’s analysis.

Fewer could afford coverage: Insurers who remain would hike rates by roughly 25% next year and would nearly double them by 2026 to cover the costs of their sicklier enrollees, the CBO found. Consumers who currently receive Obamacare subsidies to help afford policies on the exchanges would see their premiums jump even higher since that federal assistance would disappear.

Some people would have to buy plans with higher deductibles or co-pays, since they have lower premiums. But many lower-income consumers wouldn’t be able to afford coverage at all, the agency projected. The bill would also do away with the subsidies that reduce premiums and deductibles for lower-income Americans.

Many low-income adults would be left uninsured: Roughly 11 million adults gained coverage thanks to Medicaid expansion. They would lose this insurance since the bill would eliminate that Obamacare provision, which has helped many drug addicts get substance abuse treatment.

There are lots of losers on Capitol Hill, too.

Moderates wouldn’t save Medicaid expansion or subsidies: Moderate Republican lawmakers and governors have opposed the Senate’s more comprehensive plan to repeal and replace Obamacare because it would curtail federal support for Medicaid and leave many more Americans unable to afford coverage.

This bill doesn’t solve those concerns.

Related: What happens if Congress fails to repeal Obamacare

The wealthy would make out big: The bill would repeal two Obamacare taxes levied on the rich in order to fund coverage expansion, giving them a $290 billion gift over 10 years, according to the CBO.

Under the Affordable Care Act, single taxpayers with incomes above $200,000 and couples making more than $250,000 annually have to pay an additional 0.9% Medicare payroll tax on the amount they earn above these thresholds. These taxpayers may also be hit with a tax surcharge of 3.8% on investment income above those thresholds.

These levies would disappear in 2018 and 2017, respectively, under the repeal-only bill.

There is one more group who might be considered “winners.” Those who don’t want to buy insurance wouldn’t have to since they would no longer have to pay a penalty. Under Obamacare, they pay $695 per adult or 2.5% of household income, whichever is higher.

The CBO predicts that many consumers would drop coverage once the individual mandate is effectively lifted.

Of course, these folks would only be winners as long they didn’t get sick or hurt and actually need health insurance.