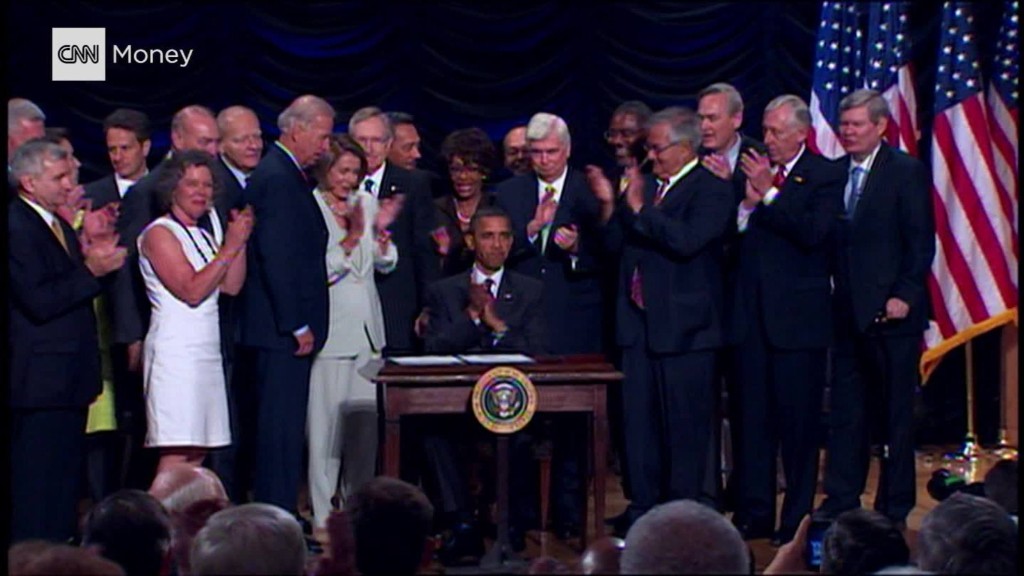 Senators are gearing up for yet another legislative fight next week. This one is over a rollback of regulations passed after the financial crisis.

As of Friday evening, more than 100 amendments had been filed on a bipartisan bill that promises to ease rules for small and regional lenders, according to a summary draft seen by CNNMoney.

Progressive Democrats Sherrod Brown, the ranking member of the Senate panel, and Elizabeth Warren, are among the lawmakers, who will be pressing for changes to strengthen consumer protections in the legislative proposal at next Tuesday’s committee hearing.

“But Americans still struggle because of low wages, because of underemployment or unemployment, and lack of opportunities. Loosening the rules for some of the country’s largest banks is not the way to solve these problems.”

A handful of Republicans including Senator Dean Heller of Nevada and Tim Scott of South Carolina have also filed their own remedies to the bill.

Senator Mike Crapo, chairman of the Senate Banking Committee who spearheaded the bill with the support of 20 senators, has touted it as one that has garnered “very strong bipartisan support for tailoring and simplifying regulations” for smaller institutions and community banks, while also improving access to mortgage credit and housing for Americans.

One of the biggest changes in Crapo’s measure calls for raising the threshold at which banks are labeled as too big to fail to $250 billion from $50 billion in assets — an effort both Powell and Fed Chairwoman Janet Yellen have expressed support for. Doing so, would alleviate those firms from some of the most stringent rules under the 2010 Dodd-Frank regulatory reform law.

It would also exempt banks with less than $10 billion in assets from the so-called Volcker Rule, which bars institutions from making risky market bets with their own capital.

And while the legislative proposal has the backing of 10 Democrats, progressive like Brown and Warren have staunchly opposed the measure for its inadequate consumer protections.

Republican efforts to overhaul the 2010 law have failed in the past because Democrats have argued they went too far in gutting safeguards aimed at protecting consumers and ensuring that Wall Street doesn’t cause another meltdown.

Crapo initially began the process of drafting a legislative proposal with Brown. But talks broke down earlier this fall, prompting Crapo to begin negotiating with moderate Democrats on the Senate panel, including Senators Jon Tester, Heidi Heitkamp and Joe Donnelly.

Among the more than 100 fixes proposed include giving Americans greater control over their own personal information and stronger tools to oversee their credit reports.

Other changes include exempting banks from any form of regulatory relief if the financial firm has previously failed its annual Fed stress test or has a history of misconduct tied to its home mortgage business.

Democratic staffers told reporters on Friday the bill as proposed would put taxpayers at greater risk for another bailout by loosening regulations on how often banks face a financial health checkup and would exempt dozens of the largest U.S. firms from drafting so-called “living wills,” a plan required to unwind a failing bank safely.

What’s more Crapo’s proposal would also erase a number of critical protections to home buyers, according to Democratic staffers.

For example, it would block certain homeowners from going to court to stop banks from wrongfully foreclosing and kicking them out of their homes.

Related: Trump kills rule that made it easier for people to sue banks

The proposal would also allow the banks to sell customers adjustable rate mortgages without disclosing what the interest rate would rise to when the teaser rate expires.

It would also rid of new reporting requirements of mortgage data collected by banks that impede regulators ability to spot lending trends like discriminating against minorities.

Crapo’s bill would also provide Americans with less protection from massive data breaches like Equifax under the proposal, according to staff.

Still, the bill has gotten some early support from regulators at the Federal Reserve.

Powell endorsed Crapo’s measure to provide regulatory relief to financial institutions during Tuesday’s hearing, while agreeing it would still give latitude to the Fed to supervise and regulate banks as needed.