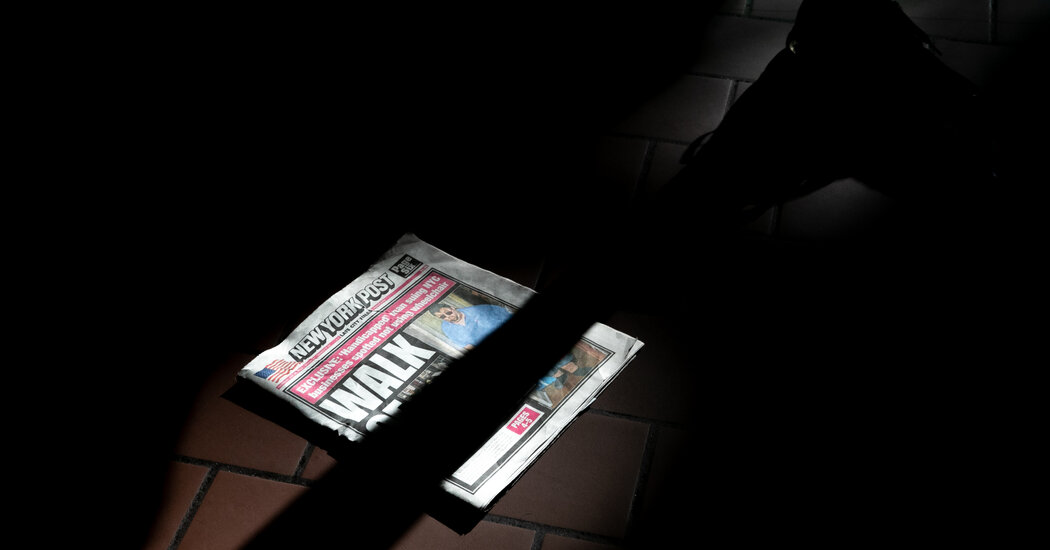 CNN, MSNBC, The Washington Post and The New York Times are among the news organizations that President Trump has falsely labeled “fake news.” And now articles based on reporting from the four outlets are no longer welcome at Rupert Murdoch’s New York Post, according to three journalists who work there.

High-level editors at The New York Post instructed staff members this week not to use reporting from CNN, MSNBC, The Times and The Washington Post as the sole basis for any Post article, the three journalists said, speaking on the condition of anonymity for fear of retaliation. A Post spokeswoman declined to comment.

It is common practice at The New York Post and its website, nypost.com, to publish articles based entirely on other news outlets’ reporting, without independent confirmation by a Post journalist. The Post is not alone in following this widespread practice, and many news sites have had success by repackaging material from other news organizations. The directive at the Murdoch tabloid was unusual in that it deemed material from certain outlets off limits.

The order was handed down by Michelle Gotthelf, the editor in chief of nypost.com, and section editors, the three Post journalists said. Post journalists who now spot a report on the four forbidden outlets that they think is worth writing up must now do some reporting before they go to the keyboard.

Why did The Post single out these four outlets and not, say, Variety or CBS News? The three journalists said no explanation had been given, but they added that the reason did not have to be detailed. CNN, MSNBC, The Washington Post and The Times are seen as liberal within the Murdoch empire, which is home to Fox News and Fox Business, cable networks that were instrumental to the rise of President Trump. To publish articles based on the work of those organizations would not fit The Post’s right-leaning identity, the journalists said.

That identity has gone through whiplash changes in recent months. During most of the 2020 election, under the guidance of the senior adviser Col Allan, a former editor in chief of The Post who was having a newsroom comeback after roughly 40 years at Murdoch papers, the paper went all in for Mr. Trump and sometimes belittled his rivals.

In the final days of the campaign, when Mr. Trump seemed headed for defeat, the tabloid’s tone shifted. A Post article published shortly before Election Day reported that the president was making the “unfounded claim that political foes were trying to steal the election.” Mr. Allan, who was once seen wearing a Make America Great Again cap in the newsroom, announced that he would retire.

As the president continued to push his false claim that the election had been rigged, and his fervent fans backed him with cries of “Stop the steal,” The Post seemed to make a sharp break, publishing a Dec. 27 front-page editorial headlined “Stop the Insanity.” The editorial blasted Mr. Trump over his refusal to accept the election outcome and told him to “end this dark charade.”

The ban on articles based on the work of CNN, MSNBC, The Times and The Washington Post was ordered days after a mob incited by the president stormed the Capitol building. The news media was a secondary target of the antigovernment agitators. Amid the violence, Trump loyalists chanted, “CNN sucks,” and MSNBC journalists said they had made sure not to display MSNBC-identifying markers on their gear or clothing.

Over the weekend, high-level editors expressed dissatisfaction with The Post’s coverage of Mr. Trump, the three journalists said. The editors pointed to an article published on Saturday based on a CNN report that Vice President Mike Pence had not ruled out using the 25th Amendment to oust Mr. Trump from office.

Another example of The Post’s reliance on material from the now-off-limits outlets was also published on Saturday — an article that credited The Washington Post for its reporting on a memo from the Senate majority leader, Mitch McConnell.

The Post is short-staffed, the three journalists said. Some reporters write five or more articles a day. That is partly what makes them turn to the work of other outlets.

Mr. Allan will call it a career in March, and The Post and its website will have a new top editor: Keith Poole, a British journalist well versed in the ways of Fleet Street journalism. Mr. Poole was a digital editor at The Daily Mail, a site known for its endless-scroll stories of celebrity coffee runs, before he joined the Murdoch empire as the digital editor of the London tabloid The Sun in 2016.