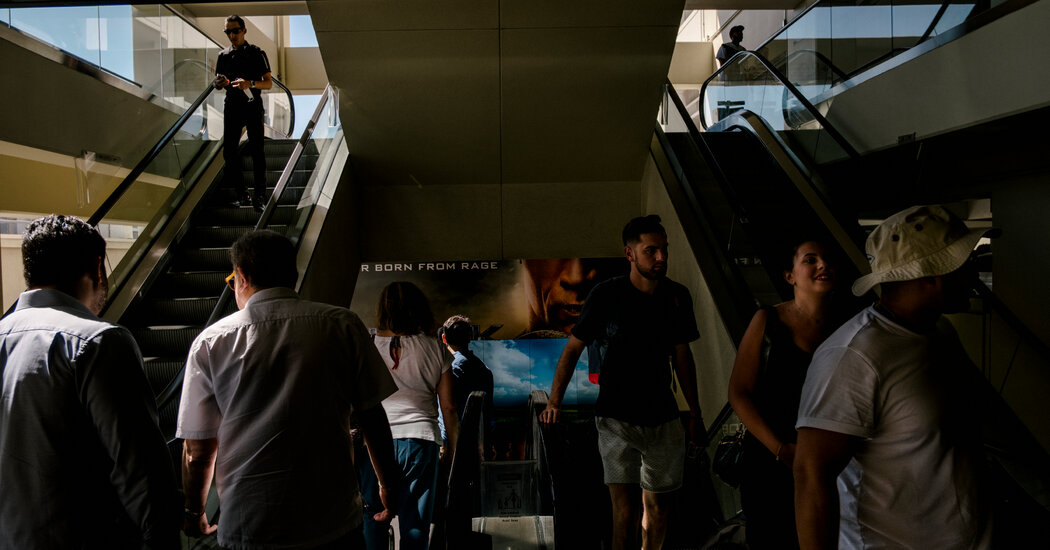 The Federal Reserve’s preferred inflation gauge remained elevated in August, data released on Friday showed, further evidence that the central bank is contending with a stubborn problem as it tries to choke off the worst inflation in four decades.

The Personal Consumption Expenditures inflation measure, which is the measure the Fed officially targets as it tries to achieve 2 percent annual inflation, climbed 6.2 percent in the year through August. While that was a slowdown from 6.4 percent in July, it was higher than the 6 percent economists in a Bloomberg survey had expected.

The details of the report were even more concerning. Price increases have been moderating somewhat on an overall basis, partly because gas prices have been declining. But after stripping out volatile fuel and food prices to get a sense of underlying inflationary pressures, the index climbed 4.9 percent in the year through August, an acceleration from 4.7 percent the month before. And on a monthly basis, the core index picked up by 0.6 percent, the fastest pace of increase since June.

Consumers also continued to spend in August, particularly on dining, travel and other services, the report showed, though the pace is slowing. Incomes rose, buoyed by a hot job market.

The data underlined the challenging path the Fed faces as it tries to guide the U.S. economy toward slower inflation. Both the economy and price pressures have retained momentum, even as central bankers raise interest rates to try to cool demand. As a result, the Fed has become steadily more aggressive in its efforts to constrain spending and temper inflation, and it is likely to keep raising rates and keep them elevated for a while.

What is inflation? Inflation is a loss of purchasing power over time, meaning your dollar will not go as far tomorrow as it did today. It is typically expressed as the annual change in prices for everyday goods and services such as food, furniture, apparel, transportation and toys.

What causes inflation? It can be the result of rising consumer demand. But inflation can also rise and fall based on developments that have little to do with economic conditions, such as limited oil production and supply chain problems.

Is inflation bad? It depends on the circumstances. Fast price increases spell trouble, but moderate price gains can lead to higher wages and job growth.

“Inflation is very high in the United States and abroad, and the risk of additional inflationary shocks cannot be ruled out,” Lael Brainard, the Fed’s vice chair, said in a speech on Friday. She later added that policymakers were “committed to avoiding pulling back prematurely.”

The Fed has lifted interest rates five times this year, including three unusually large three-quarter point rate increases, and Ms. Brainard reiterated that it would need to restrict the economy for some time to make sure inflation is back under control. But she also emphasized that future rate increases would depend on incoming data, suggesting that the Fed will keep an eye on the economy as it slows down and calibrate its moves accordingly.

Economists remain hopeful that healing supply chains, a slowing housing market, cooling consumer demand and a moderating labor market will combine to pull inflation lower in the months ahead. Spending on goods fell in August for the second month in a row, which should ease pressure on factories and shipping routes, and overall spending may slow further as consumers draw down the extra savings they built up earlier in the pandemic.

But Russia’s war in Ukraine poses a constant risk to the global supply of food and oil, and some industries, including automobiles, remain severely disrupted. Rents and other service costs have been rising sharply, and labor shortages spanning many industries have pushed wages up, which could feed through to higher prices.

Those factors have informed the Fed’s decision to stage its most aggressive campaign in decades to bring inflation under control.

Fed officials signaled in their latest economic projections that they expect to lift interest rates by another 1.25 percentage points by the end of the year. The report probably keeps them on track for such a plan, said Subadra Rajappa, head of U.S. rates strategy at Société Générale.

The above-expectation inflation number “has to be somewhat troubling, but I don’t think it changes anything for the Fed,” she said. “They have more work to do.”

Still, the Fed’s war on inflation comes at a risk. Higher interest rates take time to filter through the economy, and the Fed is moving so quickly in its bid to choke off inflation that it isn’t waiting to see the effect of its moves before ushering in new ones.

Understand Inflation and How It Affects You

“They have to choose between being forward looking versus backward looking,” said Blerina Uruci, a markets economist at T. Rowe Price. She said that the fresh consumption data suggested that consumers were pulling back, but that is taking time to show up in inflation data — so by focusing on the price figures, the Fed could end up raising rates more than is needed.

And other central banks are also raising rates, which could combine with turmoil from the war in Ukraine and other factors to sharply slow the world’s economy. Fed officials themselves have acknowledged that the global situation is in a state of flux.

As higher rates play through the economy to slow spending and weaken the labor market, it could push up unemployment and even cause a painful recession. While officials are hoping that outcome can be avoided, they admit that the chances of averting a bad outcome have grown slimmer as inflation has remained persistently and painfully high and their policy path has become more aggressive.

Still, central bankers have suggested that it is a necessary gamble. While a recession would be bad for Americans, costing them jobs and most likely slowing their wage gains, today’s inflation is also a burden on many households. Families are finding that it is harder to afford basic necessities like housing, clothing and food, which is a particular burden for consumers with lower incomes who have less room to cut spending from their budgets or to substitute with cheaper options.

As inflation drags on, people and businesses might get used to today’s rapidly climbing prices. If that happens, they might adjust their behavior accordingly, with workers asking for more frequent pay increases and businesses passing those higher labor costs along to customers in the form of higher prices. If that were to happen, inflation could become a self-fulfilling prophesy.

Fortunately, measures of inflation expectations seem to be relatively stable, and have even declined somewhat in recent months. But Fed officials have been clear that after more than a year of rapid price increases, they do not want to take that stability for granted.

“The longer the current bout of high inflation continues, the greater the chance that expectations of higher inflation will become entrenched,” Jerome H. Powell, the Fed chair, said at his news conference on Sept. 21.