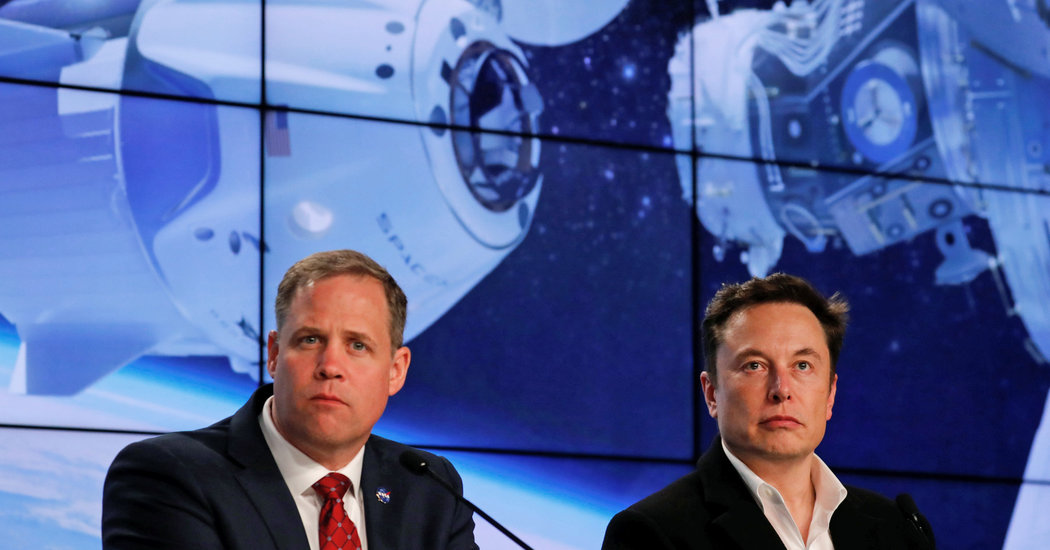 A visit by the NASA administrator to a rocket factory is usually a predictable show-and-tell of the latest gadgets destined for outer space.

But there may be some tension below the surface on Thursday when the current administrator, Jim Bridenstine, stops by the headquarters of SpaceX, the private rocket company of the billionaire Elon Musk, in Hawthorne, Calif. SpaceX is a major contractor for NASA.

He and Mr. Musk have been exchanging nettlesome messages for the last two weeks. This visit may be as much about smoothing over ruffled feelings as viewing space hardware.

NASA and SpaceX’s relationship is sometimes fractious. They are frenemies — odd, codependent bedfellows with shared dreams of pushing outward into the solar system, a cantankerous couple that cannot live with each other and cannot live without each other.

Without NASA’s help and contracts over the last 13 years, SpaceX would not have become the powerhouse that now dominates the business of launching satellites to orbit. In return, SpaceX offers NASA cheaper costs for taking cargo — and in the coming months, it hopes, astronauts — to the International Space Station.

Yet Mr. Musk sometimes complains that NASA’s meticulous safety reviews are holding the company back, while Mr. Bridenstine appears to wonder whether Mr. Musk’s dream of future Mars colonies is distracting the company from its obligations to NASA.

A SpaceX spokeswoman said the two men would take questions from reporters at approximately 5 p.m. Eastern time. The session will be streamed on Mr. Bridenstine’s Twitter account. But any pleasantries may not resolve the underlying tensions.

What is the source of the NASA-SpaceX dispute?

Two weeks ago, as Mr. Musk prepared to give an update on Starship, a giant spacecraft that he hopes could travel to Mars sometime in the next decade, Mr. Bridenstine posted on Twitter a message that suggested that SpaceX needed to put more attention on its contract with NASA to launch astronauts to the space station aboard the Crew Dragon spacecraft.

Instead of building and operating its own spaceships like the space shuttles, which were retired in 2011, NASA has now turned to SpaceX and Boeing for providing the transportation of astronauts.

Both Boeing and SpaceX are behind schedule in this “commercial crew” program, and their first crewed launches will probably not occur until sometime in 2020.

Adding to the tension are the years of delays and cost overruns in the development of NASA’s upcoming giant rocket, the Space Launch System. Critics of S.L.S. have suggested that SpaceX could offer better alternatives for NASA’s planned large deep space missions: either the future Starship, or the Falcon Heavy, which is smaller but already flying.

“Mr. Bridenstine is in a tough spot,” said Phil Larson, a former space adviser during the Obama administration and now an assistant dean at the University of Colorado’s engineering college. “That tweet came out of left field, and due to its tone, shines a spotlight on a number of NASA programs that are behind schedule and over budget.”

How did Elon Musk reply?

When asked about Mr. Bridenstine’s tweet during an interview with CNN after the Starship event, Mr. Musk jokingly replied, “Did he say commercial crew or S.L.S.?” and broke into laughter.

He also said that SpaceX could be ready to launch NASA’s astronauts in three to four months.

In another interview after the event, Mr. Musk said that the rockets and the Crew Dragon capsules for two upcoming commercial crew missions would be in Florida soon. The first is an uncrewed test of the abort system to make sure it can whisk the capsule with the astronauts to safety in case of a rocket failure on the way to orbit; the second is a demonstration flight that will take two NASA astronauts to the International Space Station.

“Actually, there’s nothing more we can do from a hardware standpoint,” Mr. Musk said. “The hardware is basically done. It’s really just a whole bunch of NASA reviews, essentially. Speed up the NASA reviews, we can launch sooner.”

Mr. Musk also said that only about five percent of SpaceX’s resources were devoted to Starship.

How did NASA respond to that?

In an interview with The Atlantic, Mr. Bridenstine said of Mr. Musk’s joking on CNN: “Well, I don’t think that’s helpful.”

He was highly doubtful of Mr. Musk’s timeline that the first launch with astronauts could occur in three to four months, pointing out recent test failures. SpaceX successfully sent a Crew Dragon capsule — without crew — to the space station in March, but during a subsequent ground test, the capsule was destroyed in an explosion. No one was injured, but SpaceX and NASA had to investigate what happened and fix the problems.

Mr. Bridenstine also said he was not singling out SpaceX: “I’ve been critical of all contractors that overpromise and underdeliver.”

If delays for SpaceX and Boeing continue past early 2020, NASA will have to consider buying additional seats on Russian Soyuz rockets, which have been the only way that astronauts have been able to get to the International Space Station since 2011.

Some of the turmoil is of NASA’s own doing. In July, Mr. Bridenstine removed William Gerstenmaier as leader of NASA’s human exploration and operations directorate. Kenneth Bowersox, a former astronaut who was Mr. Gerstenmaier’s deputy, is leading that part of NASA on an acting basis, and Mr. Bridenstine has yet to announce a permanent replacement.

NASA also is trying to accelerate work on its Artemis program to send astronauts back to the moon by 2024.

Eric Berger, who writes about space at the website Ars Technica, noted on Twitter the crunch of unfinished work:

Mr. Musk was among those who replied to Mr. Berger’s tweet, saying that he had just reviewed the schedule, reallocated some of SpaceX’s resources and visited the factory of the parachute maker. The in-flight abort test — the uncrewed flight that precedes the crewed one — will probably occur in late November or early December, Mr. Musk said.