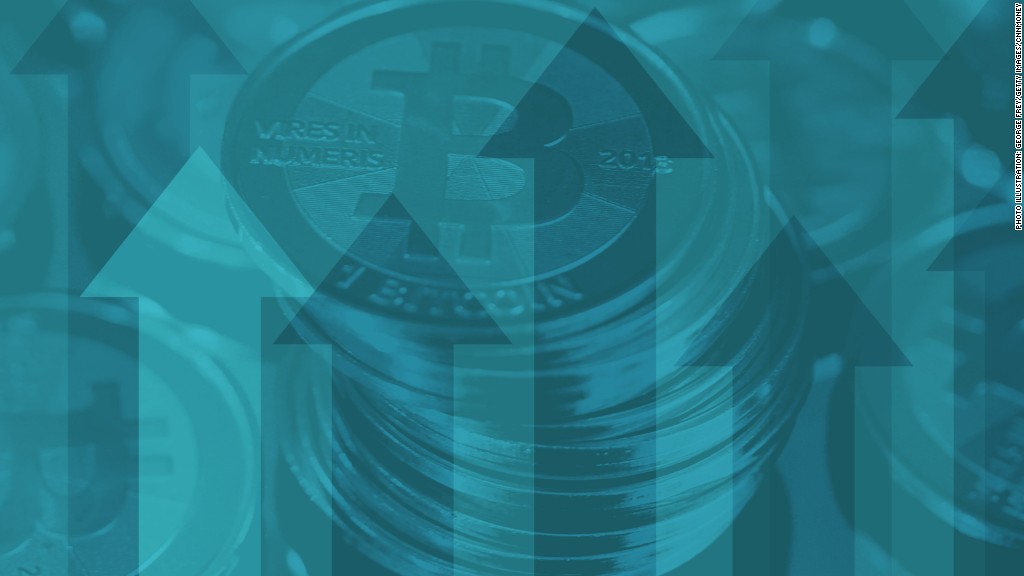 Bitcoin has been on amazing ride for the past few weeks. But there is actually another cryptocurrency that’s enjoyed an even bigger spike lately.

It’s called litecoin, and it has nearly doubled in just the past 24 hours and has surged more than 250% in the past week according to digital currency brokerage site Coinbase. Bitcoin, by way of comparison, is up “only” about 45% in the past week.

Litecoin is on an even crazier tear over the past month and year, skyrocketing more than 500% in the past 30 days and 10,000% in the past 12 months. (Prices change so fast though that these figures may be woefully out of date by the time you read this!)

Litecoin is one of several alternative cryptocurrencies that have cropped up to rival bitcoin. Ethereum, ripple and dash are some others.

Litecoin is much smaller though. The combined value of all the litecoins in circulation is about $18 billion, compared with nearly $300 billion for bitcoin. It is also created, or mined, by people solving complex mathematical puzzles on computers.

You don’t have to mine bitcoin and other cryptocurrencies to buy them though. Coinbase and other brokerage sites let you set up an account to buy and sell virtual currencies. Mobile payments company Square is testing bitcoin purchases on its Cash app too.

Litecoin, founded by former Google engineer and former director of Coinbase Charlie Lee, is said to be faster and cheaper to mine than bitcoin.

Lee, amusingly enough, goes by the name of @SatoshiLite on Twitter — a reference to Satoshi Nakamoto, the nickname used by the still anonymous inventor of bitcoin.

There are rampant rumors about who Nakamoto might be. Some think it’s a group of people. There was even speculation recently that Tesla and SpaceX founder Elon Musk is actually Satoshi Nakamoto. Musk has denied it.

But no matter who created bitcoin and launched the crypto revolution, it is clear that investors can’t get enough of virtual currencies.

Some experts are nervous that this can’t end well though, and that bitcoin, litecoin and other cryptocurrencies are a bubble destined to burst in spectacular fashion like tech stocks in 2000 and housing prices just before the Great Recession of 2008.

The problem with bitcoin and litecoin is that they are so volatile. Paper currencies like the dollar, euro and yen don’t tend to move in such wild fashion. Neither does gold for that matter.

So it may be hard for cryptos to be used as a substitute for cash until the prices start to settle down. They also are not as available to the mainstream as old-fashioned paper money backed by governments.

SEC chairman Jay Clayton even sounded the alarm bell on bitcoin, other cryptocurrencies and initial coin offerings this week, saying “there is substantially less investor protection” than with stocks and bonds and “correspondingly greater opportunities for fraud and manipulation.”

Related: …and North Korea may be making a fortune from bitcoin too

But others argue that bitcoin and rival cryptocurrencies will continue to gain in popularity for both spending purposes and as investments.

To that end, the Chicago Board Options Exchange launched futures trading for bitcoin on Sunday, a move that makes bitcoin potentially more attractive to large institutional investors in the same way that oil, sugar and other physical commodities are.

The Chicago Mercantile Exchange is set to begin trading bitcoin futures on December 18 as well. And the Nasdaq is said to be considering following in the footsteps of the CBOE and CME too and could start to trade bitcoin futures next year.