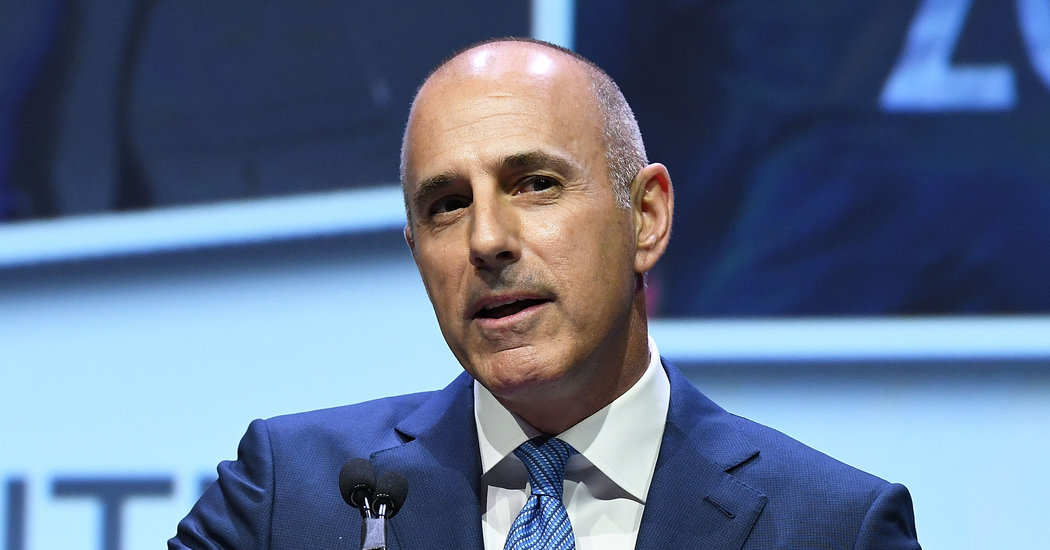 For more than 20 years, Matt Lauer was a star anchor of NBC’s most profitable franchise, “Today.” His downfall came in November 2017, when the network fired him after receiving a complaint of sexual misconduct against him. The accusation was soon followed by others.

Now, the circumstances of that firing have resurfaced in a book by the investigative journalist Ronan Farrow that contains new details from Mr. Lauer’s primary accuser, including her account of a rape. The book, “Catch and Kill,” is expected to be released on Tuesday.

The accuser provided an account of her interactions with Mr. Lauer to The New York Times nearly two years ago, but said she was not willing to go public with her story at the time. On Wednesday, Variety reported that Mr. Farrow had secured an on-the-record interview with the woman, Brooke Nevils, who allowed the author to name her in the book.

Mr. Lauer denied the allegation in a letter provided by his lawyer on Wednesday.

A lawyer for Ms. Nevils declined to comment. Little, Brown, the publisher of “Catch and Kill,” did not immediately comment.

Before he left for The New Yorker, Mr. Farrow was a reporter at NBC News, working as a contributor to MSNBC and, for a time, as a correspondent on “Today,” with a segment called “Undercover With Ronan Farrow.” At the time of his departure from the network in August 2017, he was pursuing allegations of sexual misconduct against the film mogul Harvey Weinstein. Mr. Farrow and executives at NBC News disagreed bitterly over whether or not his reporting was ready for broadcast, and their working relationship came to an end.

In an interview with The Times, a news producer who worked with Mr. Farrow at NBC, Rich McHugh, accused the network of impeding Mr. Farrow’s reporting on Mr. Weinstein. He called the interference “a massive breach of journalistic integrity.”

NBC News disagreed. In an email to the staff, the NBC News chairman Andrew Lack said that the network “had nothing yet fit to broadcast,” adding, “We spent eight months pursuing the story but at the end of that time, NBC News — like many others before us — still did not have a single victim or witness willing to go on the record.”

In “Catch and Kill,” Mr. Farrow has set his sights on Mr. Lack and the NBC News president Noah Oppenheim. The book includes a more detailed account of the pushback Mr. Farrow said he received from the news division’s executives, and its new allegations concerning Mr. Lauer could have reverberations at the network.

At the time of Mr. Lauer’s firing, NBC News executives said that they had not been aware of the host’s sexual misconduct until the first accuser filed a complaint. In a memo to the staff, Mr. Lack wrote: “While it is the first complaint about his behavior in the over 20 years he’s been at NBC News, we were also presented with reason to believe this may not have been an isolated incident.”

The network started an inquiry. Unlike previous investigations of sexual misconduct involving employees at media companies like NPR and Fox News, which relied on the work of outside law firms, NBC used its own counsel to look into the question of whether or not its executives were aware of Mr. Lauer’s behavior before any complaint was lodged against him.

“We found no evidence indicating that any NBC News or ‘Today’ show leadership, News H.R. or others in positions of authority in the News Division received any complaints about Lauer’s workplace behavior prior to Nov. 27, 2017,” the report concluded.

Mr. Farrow’s book may fuel skepticism toward that conclusion: Ms. Nevils, the accuser, told the author that she told many people at NBC, including superiors, about Mr. Lauer’s conduct long before he was fired, according to the Variety report.

NBC News responded to Mr. Farrow’s reporting with a statement on Wednesday. “Matt Lauer’s conduct was appalling, horrific and reprehensible, as we said at the time,” the network said. “That’s why he was fired within 24 hours of us first learning of the complaint. Our hearts break again for our colleague.”

Mr. Lauer was part of an ignominious cohort of media figures felled by sexual misconduct allegations in 2017 and 2018, a group that included Mr. Weinstein, the CBS anchor Charlie Rose and the CBS chairman and president Leslie Moonves.

Along with Jodi Kantor and Megan Twohey of The Times, Mr. Farrow was one of the journalists whose investigative reporting, much of which turned up accusations against Mr. Weinstein and Mr. Moonves, advanced the #MeToo movement, bringing about a nationwide reckoning on workplace behavior and a reconsideration of the everyday abuses committed by men in positions of power.

Ms. Kantor, Ms. Twohey and Mr. Farrow were prominent among the group of reporters awarded the 2018 Pulitzer Prize in public service. A theme of their work concerned the so-called enablers who stood by as abuses took place. With the imminent arrival of Mr. Farrow’s “Catch and Kill,” a question coming once again to the fore is whether or not that group includes top executives at NBC and NBC News.