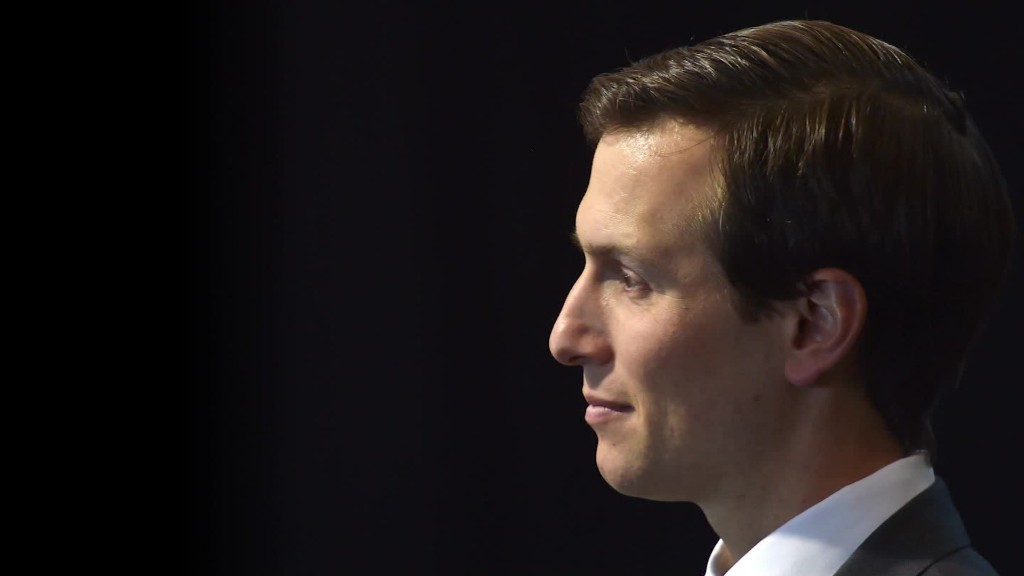 Jared Kushner’s role in the West Wing is complicating his family company’s attempts to get real estate deals done.

Scrutiny from government watchdogs and lawmakers has ensnarled at least two of the company’s key projects, according to people with knowledge of the developments.

White House adviser Jared Kushner stepped down as CEO of the company in January and recused himself from certain policy issues. But those measures haven’t fully shielded his family’s namesake business from allegations of conflicts of interest and criticism from political foes.

In Jersey City, New Jersey, Kushner Companies had sought to use local tax breaks, a high-profile tenant and a controversial government program called EB-5 to develop a luxury project.

Kushner Companies and its partner are for now ditching efforts to partially finance the project, One Journal Square, with EB-5 money, said Kenneth Pasternak, chairman of KABR Group. Pasternak’s firm is partnering with Kushner Companies on the development.

The EB-5 program offers foreigners a path to a green card if they invest at least $500,000 in a U.S. project that creates jobs.

Reversing course on the use of EB-5 funding has led the real estate developers to seek capital elsewhere.

The shift comes after Jared Kushner’s sister Nicole Meyer faced blowback for referencing her brother’s White House position during a presentation in May to potential EB-5 investors in China.

In addition, Jersey City Mayor Steven Fulop, who had touted a “terrific friendship” with Jared Kushner in 2014, announced on Facebook that he would not support a tax break for One Journal Square. His post included a link to an article that mentioned criticism of Meyer’s EB-5 presentation in China.

Following Fulop’s statement, One Journal Square withdrew an application for the tax break, according to a letter sent to the city in May. A city official told CNN the request included two things: a 30-year tax abatement and $30 million in city-issued bonds.

Fulop is a Democrat, and his political rival says the mayor didn’t support the tax break because of the political risk he faced for aligning himself with the Kushners in the past.

“This pivot away was clearly based upon Fulop’s identification of a shift in the political winds and recognition that Trump and Kushner are toxic in Jersey City,” said Bill Matsikoudis, a Democrat, who is running against Fulop in the city’s mayoral race.

Fulop did not respond to CNN’s request for comment.

WeWork was considering renting space in the building and committed to investing in the project as a development partner.

But WeWork decided against renting space and is now seeking to unwind its development stake, according to a person familiar with the situation.

One observer said she wasn’t surprised.

“Like it or not Kushner Companies have become politicized, and in some ways that may benefit them and in others it might not,” said Brigid Callahan Harrison, professor of political science and law at Montclair State University in New Jersey.

The crown jewel of Kusher Companies’ portfolio — the skyscraper at 666 Fifth Avenue in Manhattan — faces a similar predicament.

In 2007, Kushner Companies solidified the family’s status as a serious contender in New York real estate with a $1.8 billion deal for the building — a record purchase price at the time.

Kushner Companies overpaid for the asset with the assumption rents would increase in the building, according to analysts. But the financial crisis struck shortly after the purchase, and Manhattan rents took a nosedive.

The property hasn’t generated enough revenue to cover its debt payments, according to 2016 data from analytics company Trepp, which tracks real estate debt.

Kushner Companies has been seeking a partner who can afford an expensive redevelopment plan that would transform the building’s tower from prime office space to luxury condominiums and hotel space. The projected cost of that plan is $7.5 billion, according to the Wall Street Journal.

China’s Anbang Insurance Group was weighing an investment in the project, but talks between the two companies collapsed in March. The same month, five Democratic lawmakers sent a letter to a White House lawyer describing the potential deal as a “highly troubling transaction” that could present a conflict of interest for Jared Kushner.

Analysts say 666 Fifth Avenue could produce enough cash to cover its debt payments if it fills empty space in the building. The office portion of the building is 70% occupied, according to Trepp.

“Under current market conditions a massive redevelopment plan for 666 Fifth Avenue seems unlikely, but there is still time to lease the office space and return value to the property before the loan comes due,” said Thomas Fink, a senior vice president at Trepp.

Kushner Companies sold part of the building to Vornado Realty Trust in 2011. Today, the office tower shoulders more than $1.4 billion in debt, according to a report by Vornado released in March.

Kushner Companies is still seeking deep pocketed investors for 666 Fifth Avenue. Interest on a large portion of the debt, $1.1 billion, will jump from about 5.5% to 6.35% by next year, according to Trepp. The full balance on the loan comes due in 2019.

In response to CNN’s questions about the property, a Kushner Companies spokesperson said, “We’re pleased with the progress of exploratory discussions for a range of options for the future of 666 Fifth Avenue.”

Related: Kushner and Ivanka Trump detail up to $762 million in assets

As with the One Journal Square project, reputational concerns arising from Jared’s role in the Trump administration may be undermining the family’s ambitious plans for the tower.

“There are likely a number of domestic and overseas investors [who] just wouldn’t want the publicity surrounding this, to see their names in headlines for months,” Reagan said.

In fact, some prospective partners in the property could use the political scrutiny associated with the Kushner family as leverage to extract better terms in negotiations due to a perceived “headline risk,” according to three people familiar with the building’s finances.