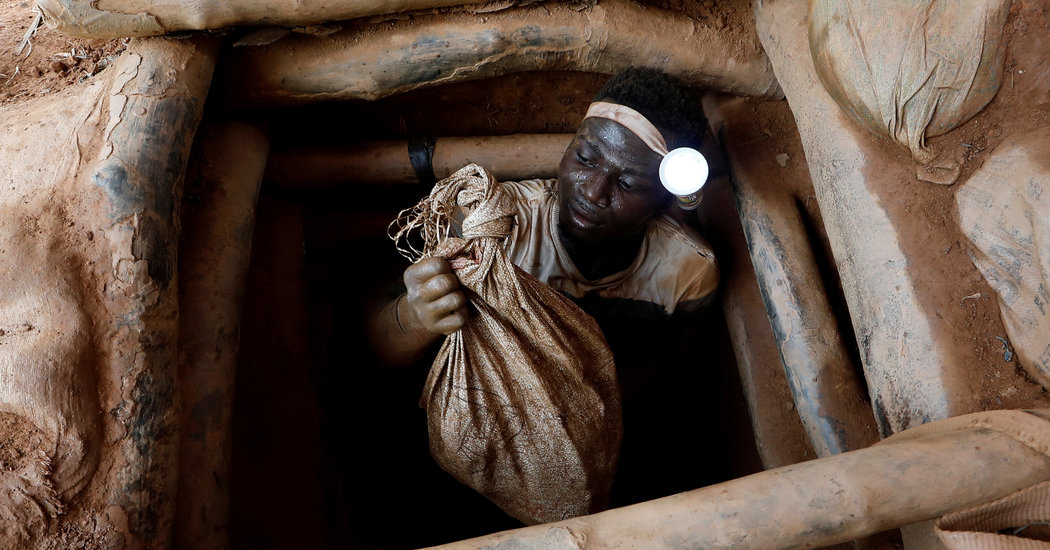 Generations Y and Z, soon to be the world’s most numerous consumers, are concerned about responsibly sourced and sustainable products. But when it comes to purchasing a gold chain or new hoop earrings, how often do they really know what they are buying?

Established as the driving technology behind cryptocurrencies, in an effort to solve that sector’s traceability shortcomings, blockchain is being considered by luxury jewelry powerhouses and the mining industry alike to guarantee the ethical provenance of gold mined in small operations, what the industry calls artisanal gold.

The regulatory oversight of these smaller operations, which produce 25 percent of the world’s gold supply, is usually spotty or nonexistent, and working conditions often are dangerous. So, the thinking goes, if larger companies and jewelry businesses require such operations to record information on a shared database, which in the blockchain can be viewed but not edited, they then can decide whether to buy output. And such economic pressure could force improvements.

Even though blockchain relies on trust — it is only as good as the quality of the information going in — the system also would paint a digital picture for consumers. It would tell them not only where the gold was mined, but also who did the work, what their working conditions were and how much they were paid.

The integration of blockchain technology into the jewelry industry is an increasing trend, said Jordgen Sandstrom, head of the World Economic Forum’s mining and metals industry group.

In October, seven leading mining companies, including the diamond behemoth De Beers, which operates sites from the Arctic to South Africa, joined the World Economic Forum’s Mining and Metals Blockchain Initiative. The companies promised to explore the creation of a blockchain platform to store information like the tracing of materials and the reporting of carbon emissions, but no timetable has been developed.

And, while all seven companies are large operations, the initiative intends to expand to small operations.

“In terms of increasing transparency, blockchain has the potential to have and act as one shared single source of truth,” said Nadia Hewett, who leads the forum’s projects on blockchain and distributed ledger technology.

Gold is not as glamorous as the glittering connotations its name evokes. Globally, 1,600 tons of gold are mined for jewelry every year, some illegally, and pass through a succession of middlemen: miners, traders, refiners and jewelers.

Within this production ecosystem is a labor force of an estimated 16 million people in at least 70 countries, predominantly throughout the Southern Hemisphere, who dig out gold for small operations. Even though those mines fuel local economies, this segment of the gold mining industry has long been shrouded in secrecy and in recent years has come under scrutiny for being rife with human rights violations and environmental concerns.

And its impacts are far-reaching: It is known to be the world’s largest single source of mercury pollution. In Indonesia alone, thousands of children have developed birth defects, half a million people have been poisoned, and food and water supplies are laced with toxic chemicals.

For many, work at these small mines or in the initial production and distribution channels provides a ticket out of poverty. But even with global gold reserves said to be down about 26 percent in recent years as a result of exploration cutbacks, the jewelry industry’s unwillingness to be associated with the fruits of child labor, human trafficking and gold derived from areas of armed conflict has limited the growth of artisanal gold as a basic material for its products.

While still in its early stages, blockchain is a growing niche within the global jewelry industry, estimated to be worth nearly $280 billion. And, similarly, the use of blockchain is being explored by luxury fashion houses like the French corporate giant LVMH Moët Hennessy Louis Vuitton. The company announced earlier this year that it was working with Microsoft and the technology company ConsenSys on a blockchain platform called Aura, intended to authenticate luxury goods.

In 2018, De Beers unveiled Tracr, a blockchain-based tracking program to create digital mine-to-consumer records of diamonds with a consortium of jewelry companies, including Signet Jewelers, which markets itself as the world’s largest retailer of diamond jewelry. In addition to the World Economic Forum initiative, De Beers has joined with TrustChain, an IBM blockchain platform, and Richemont, the Swiss owner of high jewelry brands like Cartier and Van Cleef & Arpels, agreed to include all gold in its TrustChain records.

And Arianee, a digital certification platform based in Paris, has said it is working on what it describes as a digital identity of luxury products — a serial number identifying where a product came from and whether it is sustainable — to be completed next year. The company said it was in talks with two jewelry heavyweights to deploy gold traceability, but it refused to offer further details.

Yet even as luxury businesses continue developing their plans, some observers say that commercial focus underscores a fundamental question: Who would benefit from blockchain, miners or consumers? In small-scale mining, 70 percent to 80 percent of workers are said to be informal employees, often without legal mining licenses and economic and health security.

“A blockchain-backed system might give a company more visibility, which is a good thing,” said David Finlay, the responsible-minerals manager at Fairtrade Foundation, a global organization working with farmers and workers to develop fairer terms of trade, “but is that intervention the most important thing for a miner?”

According to the Canadian technology start-up Peer Ledger, the answer is yes. Since January, it has worked on a pilot project in Tanzania, a country with an estimated 1.5 million artisanal gold miners, using its blockchain system, called Mimosi, to trace gold from particular mine pits through the supply chain.

“You can’t manage risk well if you don’t have visibility into the supply chain,” said Dawn Jutla, the president of the business, which is based in Halifax, Nova Scotia.

Literacy, lawlessness and other pressures have posed challenges, Ms. Jutla said. But she said that the effort was worthwhile, adding that she believed that the ability to upload real time information would help change harmful mining practices. She said the approach was welcomed by miners and was a successful pilot.

There have been other efforts to tackle the problems. For example, certification by industry watchdogs such as Fairmined and Fairtrade has spread in recent years. Mr. Finlay said their traceability licenses and sustainable source labeling had helped reduce illegal mining, support fair wages, challenge unsafe working environments and reduce child labor.

But experts from the Royal College of Art in London argue that there are shortcomings to certification. Workers rarely receive fair prices for gold even as global gold prices increase, and Fairmined gold is said to represent less than half a ton of gold per year, a fraction of what the world’s jewelry companies use.

In a 2018 report, Human Rights Watch assessed the sourcing of 13 jewelry powerhouses and said that several, like LVMH-owned Bulgari, had what it described as unreliable sourcing claims, and that Cartier and Chopard had a chain of custody for only a fraction of their gold supplies.

The Chain-of-Custody Standard, used by companies such as Bulgari and Pandora, is voluntary and does not require companies to put chain of custody in place, documenting transactions through the supply chain, for all their operations or materials. That leaves many jewelers relying on refiners to carry out their own due diligence over supply chains, which often fall short of international human rights standards.

Now, however, LVMH says all the houses in its Watches & Jewelry division, including Bulgari, are certified by the Responsible Jewellery Council and that, by the end of 2018, almost all gold used by Bulgari was certified as responsibly sourced.

And after the HRW report was published, Cartier became a member of the Swiss Better Gold Association, a nonprofit organization to improve gold mining operations, and Chopard pledged to use only responsibly sourced gold.