Everyone wants to knock off the king.

Amazon (NASDAQ: AMZN) has changed retail, and that has given its rivals a blueprint for success — the company has shown every other retailer exactly what it takes to dominate the market. But knowing and doing remain very different things.

The online giant’s recipe is simple. Offer good prices and free two-day shipping, and sell just about everything. That sounds like a recipe that’s easy enough to follow, but it requires an economy of scale that’s so large that Walmart (NYSE: WMT) has become its only direct rival , while everyone else merely goes after niche audiences. 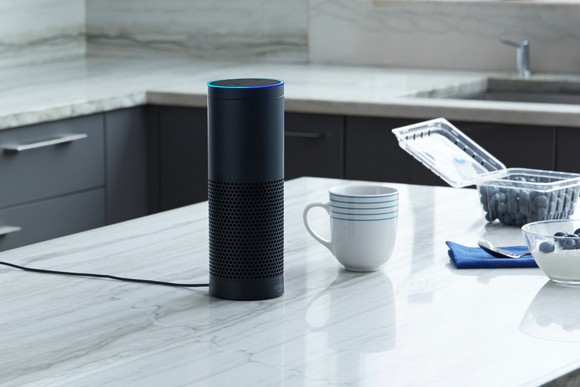 How is Amazon doing?

“Our 2017 projections for Alexa were very optimistic, and we far exceeded them. We don’t see positive surprises of this magnitude very often — expect us to double down,” said CEO Jeff Bezos in the earnings release.

What’s next for Amazon?

Consider Prime a sort of moat against competition for the online leader. Walmart stopped charging for two-day shipping on eligible orders, and that did not even cause a ripple in Amazon’s business. On the digital sales side, Walmart may grow, but so will Amazon, at the expense of smaller players and brick-and-mortar stores.

The real story for Amazon isn’t the retail war, where it’s already a winner. It’s how Alexa-powered devices like the Echo have become staples in millions of homes. That gives the company an added sales channel, and the company’s early success has kept every other company in the home-based digital assistant race fighting for a distant second.

“We’ve reached an important point where other companies and developers are accelerating adoption of Alexa,” Bezos said. “There are now over 30,000 skills from outside developers, customers can control more than 4,000 smart home devices from 1,200 unique brands with Alexa, and we’re seeing strong response to our new far-field voice kit for manufacturers.”

Amazon has become so much more than a retailer. You could argue that as a pure-retail play its stock price might have peaked, but when you consider the growth possibilities for Alexa/Echo, Amazon Web Services, grocery delivery, and its brick-and-mortar stores (which include Whole Foods), you can see that Bezos is not wrong when he says it’s “always Day 1 at Amazon.”

Scale, and the fact that Amazon was built from the ground up for efficiency, gives it an edge over its rivals, making it a buy. The company has been able to lower its shipping costs, and that will continue as it develops everything from drones to its own shipping service.

Amazon is not without risks, but its size and loyal membership make it very hard for even Walmart to compete. The company has not succeeded with everything it does, but aside from Amazon Phone, it’s resume remains free of major failures.

If you buy Amazon, you’re getting a company that has shown it can leverage success in one area into success in other markets. It probably won’t always demonstrate the near-perfect success level it has, but Amazon should keep getting bigger while entering new business segments.

Motley Fool co-founders Tom and David Gardner have spent more than a decade beating the market. (In fact, the newsletter they run, Motley Fool Stock Advisor, has tripled the market!*)

Tom and David just revealed their ten top stock picks for investors to buy right now. Amazon is on the list — but there are nine others you may be overlooking.

John Mackey, CEO of Whole Foods Market, an Amazon subsidiary, is a member of The Motley Fool’s board of directors. Daniel B. Kline has no position in any of the stocks mentioned. The Motley Fool owns shares of and recommends Amazon. The Motley Fool has a disclosure policy .