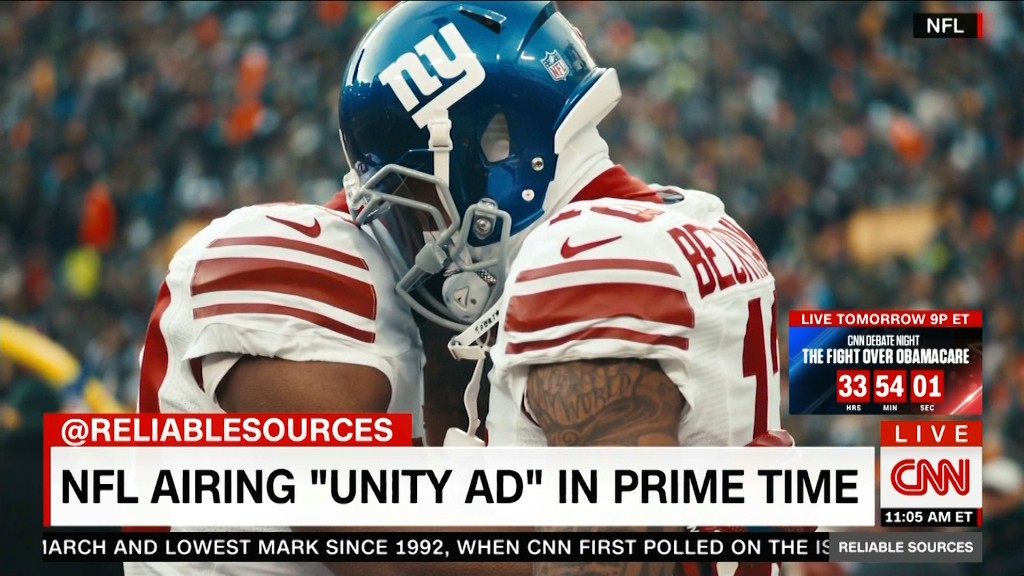 President Trump this weekend attacked the National Football League and its players who protest during the national anthem.

Many of the league’s owners, executives and team presidents fired back, after the league’s commissioner issued a statement on Saturday.

The NFL and our players are at our best when we help create a sense of unity in our country and our culture. There is no better example than the amazing response from our clubs and players to the terrible natural disasters we’ve experienced over the last month. Divisive comments like these demonstrate an unfortunate lack of respect for the NFL, our great game and all of our players, and a failure to understand the overwhelming force for good our clubs and players represent in our communities.

We are at our very best when we are working together, building unity and including everyone’s voice in a constructive dialogue. Creating division or demonizing viewpoints that are different than our own accomplishes nothing positive and undermines our collective ability to achieve the ideals of our democracy.

Related: NFL owners are not happy with Trump’s rhetoric

We recognize our players’ influence. We respect their demonstration and support them 100 percent. All voices need to be heard. That’s democracy in its highest form.

President Trump’s remarks were divisive and disrespectful to the entire NFL community, but we tried to use them as an opportunity to further unify our team and our organization. Our players have the freedom to express themselves in a respectful and thoughtful manner and we all agreed that our sole message is to provide and to promote an environment that is focused on love and equality.

Related: Under Armour sticks up for ‘athletes’ and ‘flag’

What makes this the the greatest country in the world are the liberties it was founded upon and the freedom to express oneself in a respectful and peaceful manner. Through important dialogue with our players and team, this divisive political situation has unified our franchise for the present and the future.

We must not let misguided, uninformed and divisive comments from the president or anyone else deter us from our efforts to unify. Our stance in support of the liberties of peaceful, personal expression afforded to our players and all Americans will remain strong, and we will continue to encourage our players to respectfully use their earned platform to inspire positive change in our nation and throughout society.

Our players have shown a tremendous commitment to raising awareness for important societal issues by using their platform in a positive way … As an organization, we could not be more proud, appreciative and grateful for our players. We’ll continue to support them and work together to advocate for values of respect, diversity and inclusion.

Our game has long provided a powerful platform for dialogue and positive change in many communities throughout our nation. Thanks primarily to our players, the NFL also has been a unifying force in our country and impactful change has and hopefully will continue to be the result of peaceful expression, done so in order to highlight social injustices of all kind. Negative and disrespectful comments suggesting otherwise are contrary to the founding principles of our country, and we do not support those comments or opinions.

It’s unfortunate that the president decided to use his immense platform to make divisive and offensive statements about our players and the NFL. We strongly believe that players are leaders in our communities and positive influences … We believe it is important to support any of our players who choose to peacefully express themselves with the hope of change for good. As Americans, we are fortunate to be able to speak openly and freely.

Related: How Trump tried to divide NFL and its players

The comments made by the president were divisive and counterproductive to what our country needs right now. I hope the reaction from our players results in positive action for our league, our communities and our country as a whole to make a positive difference in our society,

I am troubled by the president’s recent comments about our league and our players. Sports in America have the unique ability to bring people from all walks of life and from different points of view together to work toward or root for a common goal, and the Indianapolis Colts are proud to be a part of that tradition in our home city and state.

It was a privilege to stand on the sidelines with the Jacksonville Jaguars today for the playing of the U.S. national anthem at Wembley Stadium. I met with our team captains prior to the game to express my support for them, all NFL players and the league following the divisive and contentious remarks made by President Trump, and was honored to be arm in arm with them, their teammates and our coaches during our anthem … We have a lot of work to do, and we can do it, but the comments by the president make it harder. That’s why it was important for us, and personally for me, to show the world that even if we may differ at times, we can and should be united in the effort to become better as people and a nation.

I wholeheartedly agree with the commissioner’s statement. The NFL and its players, more than anything, have been a force for good. What our country needs right now is a message of unity, civility and mutual respect.

We believe in the tenets of the national anthem, which is a pillar of this country; just as freedom of speech is another pillar and a constitutional right. We will continue to support our players’ freedom to peacefully express themselves and the meaningful efforts they make to bring about positive change in our country.

Our country needs unifying leadership right now, not more divisiveness. We need to seek to understand each other and have civil discourse instead of condemnation and sound bites. I know our players who kneeled for the anthem and these are smart young men of character who want to make our world a better place for everyone. They wanted to start a conversation and are making a difference in our community, including working with law enforcement to bring people together. We all can benefit from learning, listening and respecting each other.

As owners, it is our job to foster an environment that recognizes and appreciates diversity of thought and encourages using this platform in a constructive manner. Rather than make divisive statements, we believe in promoting thoughtful, inspiring conversation that unifies our communities. We are proud of our players, coaches and staff for the important role they play in our community, and we fully support their constitutional right to respectfully and peacefully express their beliefs.

I am deeply disappointed by the tone of the comments made by the president on Friday. … There is no greater unifier in this country than sports, and unfortunately, nothing more divisive than politics. I think our political leaders could learn a lot from the lessons of teamwork and the importance of working together toward a common goal. Our players are intelligent, thoughtful and care deeply about our community and I support their right to peacefully affect social change and raise awareness in a manner that they feel is most impactful.

This statement was released jointly with with the Pelicans, the city’s NBA team.

Our organization takes great pride in equality and inclusion and find the comments by the President disappointing and inappropriate relative to our players on this issue. … Our players and our organization serve the New Orleans community selflessly and do so without care of race, creed or sexual orientation and that makes us a better city and a better team. We believe strongly in honoring our flag and the national anthem and what it represents and we support our players. We all must strive to show that we are all Americans and continue to work towards equality for all.

Comments like we heard last night from the president are inappropriate, offensive and divisive. We are proud of our players, the vast majority of whom use their NFL platform to make a positive difference in our society.

The best of us lend our compassion and determination to the aid of others. Every day I see the genuine dedication and hard work of our players. And I support them as they take their courage, character and commitment into our communities to make them better or to call attention to injustice. Having spoken with our players, I can attest to the great respect they have for the national anthem and all it represents. We at the Philadelphia Eagles firmly believe that in this difficult time of division and conflict, it is more important than ever for football to be a great unifier.

I am proud to stand with our players and support them in their work on and off the football field. I completely agree with Commissioner Goodell that we are better off as a nation when we are unified and pulling together. … Our players make public contributions day-in and day-out and when I hear anyone making disparaging remarks about them, I know it has to be the result of not knowing what they bring to our communities or what they have accomplished.

The callous and offensive comments made by the president are contradictory to what this great country stands for. Our players have exercised their rights as United States citizens in order to spark conversation and action to address social injustice. We will continue to support them in their peaceful pursuit of positive change in our country and around the world.

We fully support our players’ use of their freedom of speech and peaceful action to highlight the existing racial and other divides in our country. Our players completely respect the military and veterans of our country; however they believe these issues need to come to the forefront.

–CNN’s David Close and Thomas Quand contributed to this report.