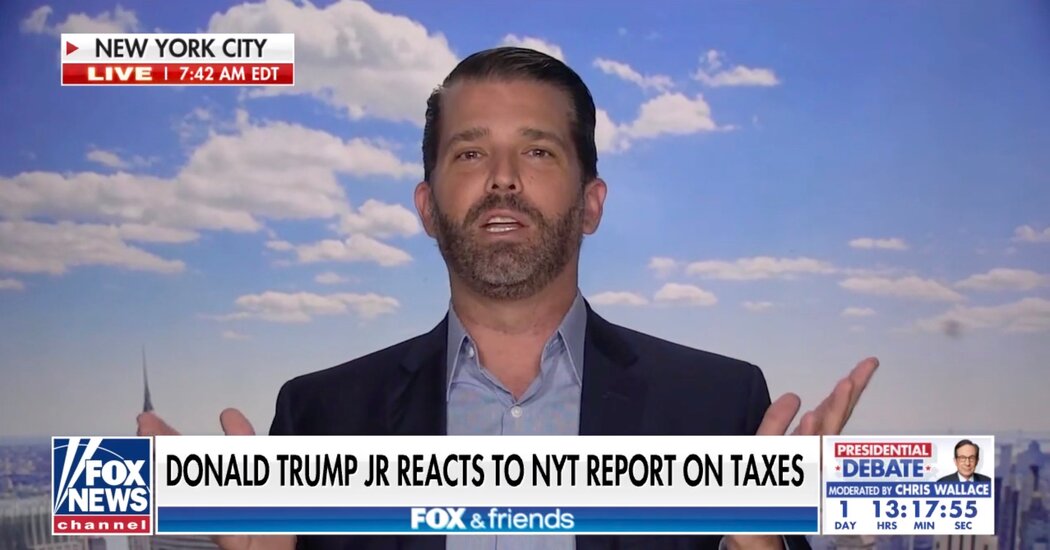 The popular Fox News morning show “Fox & Friends” was a TV home for Donald J. Trump long before he became president. In 2011, Mr. Trump had a regular Monday slot on the program, where he bonded with the hosts by hurling invective at President Barack Obama and promoting the false theory that Mr. Obama was not born in the United States.

During Mr. Trump’s presidency, “Fox & Friends” has reliably offered him a forum when he has found himself under scrutiny. In November, for instance, while facing an impeachment inquiry, the president made false, exaggerated and misleading statements in his own defense during a 53-minute appearance on the show.

On Monday, the day after The New York Times published a lengthy investigative article chronicling years of Mr. Trump’s tax avoidance and financial difficulties, “Fox & Friends” welcomed two guests from his camp, the White House press secretary, Kayleigh McEnany, and the president’s eldest child, Donald Trump Jr. Both tried to cast doubt on the article, which examined more than two decades of previously unavailable tax data showing that Mr. Trump had paid $750 in federal income taxes the year he was elected president, and no federal income tax in 10 of the previous 15 years.

In a segment that touched on the Times article, the Fox News correspondent Griff Jenkins noted that it was “probably going to come up” in the debate between the president and Joseph R. Biden Jr. on Tuesday night, a matchup to be moderated by the Fox News anchor Chris Wallace. Mr. Jenkins then passed the baton to the “Fox & Friends” co-host Ainsley Earhardt and her guest, Ms. McEnany.

Ms. Earhardt quickly homed in on the timing of the article’s publication, rather than its substance: “What do you make of the timing, the tax thing coming out a day before the debate?” she asked.

Ms. McEnany likened the article to past Times reports about President Trump, one of which she described as a “hit piece.” “This is the same playbook they tried in 2016 and the same playbook that the American people rejected and will do so again,” the press secretary said, before shifting to a discussion of Mr. Trump’s debate preparations.

The president’s son, during his appearance on “Fox & Friends,” called the article “ridiculous” and said his father had “paid tens of millions of taxes,” adding that “people don’t understand what goes into a business.” He also criticized The Times for focusing on the president’s finances, saying, “If only they spent as much time looking for, maybe, I don’t know, Hunter Biden’s tax returns and the Biden crime family issues.”

The reference to a Biden “crime family,” a staple phrase among many right-wing supporters of the president, is an unproven smear. Last week, an investigation by Senate Republicans into corruption allegations against the Democratic presidential nominee and his son Hunter found no evidence of improper influence or wrongdoing by the former vice president. The investigation concluded that Hunter Biden’s work for a scandal-plagued Ukrainian energy company, while “problematic,” did not affect his father’s handling of American foreign policy.

The younger Mr. Trump has been an aggressive proxy for his father on the campaign trail. Last week, Facebook and Twitter flagged a Trump campaign video ad featuring him because it violated recently introduced standards on both platforms meant to guard against the spread of misinformation. In the ad, he claimed without evidence that the “radical left” was trying to “steal this election from my father” with “millions of fraudulent ballots.”

During a news conference Sunday, President Trump tried to dismiss the Times report, saying “it’ll all be revealed” after an audit by the Internal Revenue Service. The I.R.S. has repeatedly said its review process does not prohibit a taxpayer from making tax returns public.