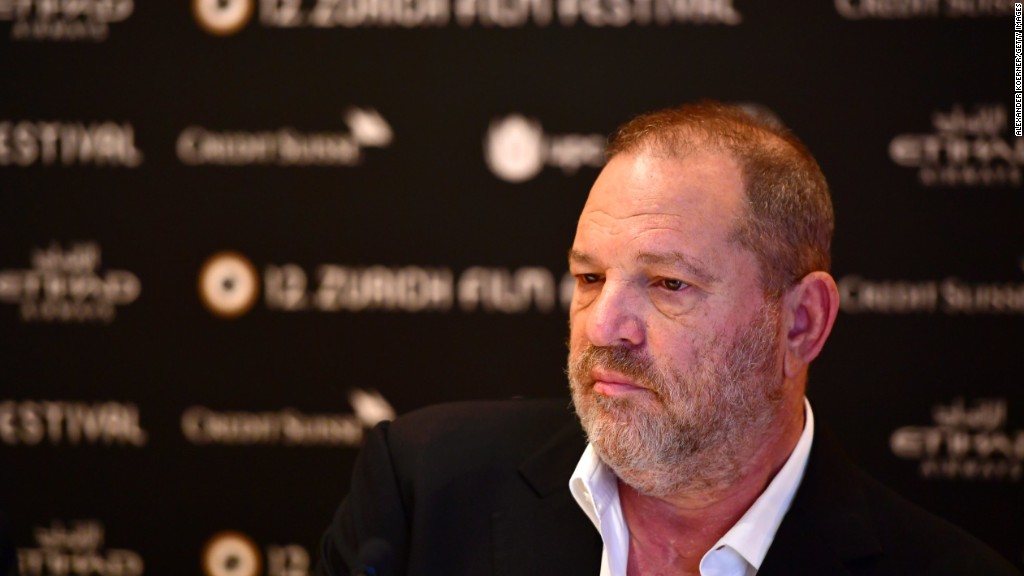 First Silicon Valley, then Hollywood … the year has been marked by high-profile sexual harassment allegations in a range of industries.

Most recently, a long list of actresses and industry professionals have accused film producer Harvey Weinstein of offenses that range from harassment to assault and rape. A spokeswoman for Weinstein has said he “unequivocally” denies all allegations of non-consensual sex.

Earlier this year, dozens of women in tech came forward with their own harassment stories, forcing several venture capitalists to resign.

All of these women have one thing in common: They weren’t employees. Instead, they were actresses seeking roles, or entrepreneurs pitching startups. That means they have no clear avenue to file a complaint with human resources.

Related: Here’s how HR is supposed to handle sexual harassment

“Do you tell your agency? They may want to protect their relationship with someone more than they want your business,” said Cynthia Shapiro, author of the book “Corporate Confidential” and a former HR exec. “How do you go to your manager if your manager knows that Harvey Weinstein is going to make you a star?”

Victims can report an offense to a perpetrator’s company, but they’re not always inclined to do so.

Those reports can be turned over to lawyers who can try to keep the complaint quiet, according to attorney David Ring, a partner at Taylor & Ring who represents victims of sexual harassment.

“A lot of times they try to bully the victim … to go away,” Ring told CNNMoney.

There are some legal routes for such victims of harassment — but which to pursue, and how successful can victims expect to be? That’s where things get murky.

Employees harassed in the workplace are protected by Title VII, a federal law that prohibits employers from discriminating against employees on the basis of sex, race, color, national origin and religion.

But there’s a gray area when employees aren’t employees in the traditional sense.

Does an actress qualify as “employed” by a producer? It depends on the terms of their individual contract, experts say.

“There are a number of unanswered questions in the law in these types of situations,” said Chai Feldblum, commissioner at the U.S. Equal Employment Opportunity Commission, which investigates Title VII complaints.

Losing out on an acting job because you’ve rejected sexual advances could indeed be evidence of Title VII discrimination, according to Maya Raghu, director of workplace equality at the National Women’s Law Center.

There’s also a patchwork of state laws that govern sexual harassment. In New York, for example, there’s a law that protects all workers in the state from sexual harassment. (Title VII only applies to companies with 15 or more employees.)

In 2015, one of Weinstein’s alleged victims went to the police. Ambra Battilana Gutierrez, a 22-year-old model, accused Weinstein of groping her breasts and putting his hand up her skirt at his office.

The NYPD wiretapped her for her next encounter with Weinstein — which is how the New York Police Department obtained a stunning audio recording of her interactions with him. When Gutierrez asked him why he had touched her breast the day before, he said, “I’m used to that.”

Charges were never filed by the district attorney’s office.

Gutierrez could have then pursued a civil case against Weinstein using that evidence, according to Ring, who is based in Los Angeles.

“With a tape like that … it’s done,” Ring told CNNMoney.

Ring said that a lot of victims may not understand that civil suits are an option for them — or may think it’s too costly to hire a lawyer.

But civil suits require lower standards of proof, so they can be easier to win.

“Sexual assault is a deliberate, intentional and malicious action,” said New York-based attorney Carrie Goldberg, who focuses on sexual assault and sexual privacy. “If you can sue someone for a fender bender,” you should be able to sue for sexual harassment, she added.

“When women are going to be isolated and receive death threats by trolls, they aren’t going to want to come forward,” she said.

Drobac added that when individual women come forward and cite similar patterns of behavior, it’s easier to build a case.

That’s what happened in the recent Bill Cosby trial. Though only one woman brought a criminal case against Cosby, dozens of others accused him of sexual misconduct. One was allowed to testify.

“One person can be dismissed and made to go away with a powerful lawyer. Two, five, 10 people? Not so easy,” Shapiro said.

The trial ended with a hung jury and was declared a mistrial.

A big barrier in these cases is timing. States have their own laws that govern how long a victim has to file a suit, according to Sandra Park, a senior attorney at the ACLU Women’s Rights Project.

“They don’t make it easy on people to pursue their civil rights,” Drobac said.