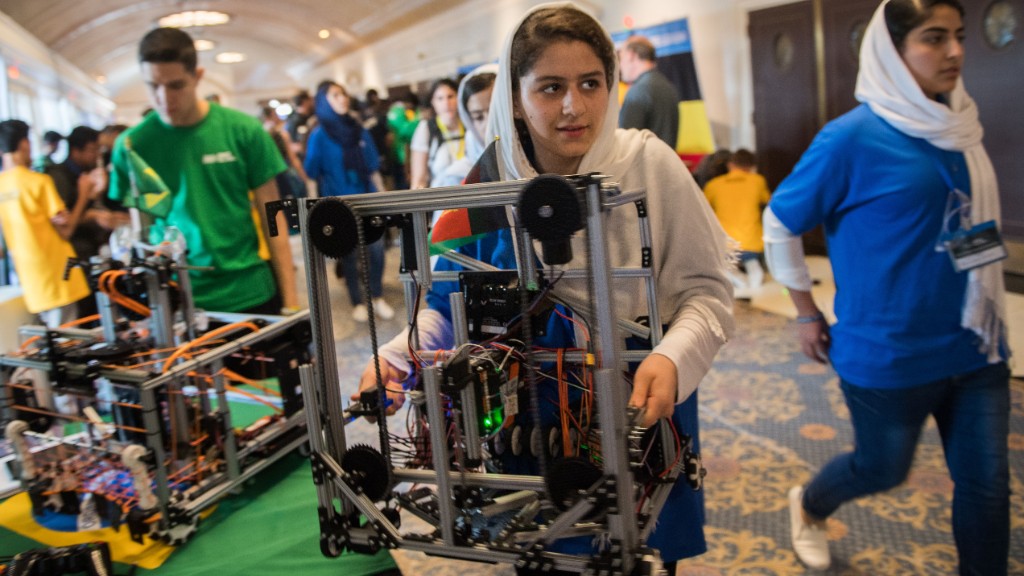 For six young women from Afghanistan, competing against 162 robotics teams was the easy part.

Monday morning in Washington, D.C., the girls finally walked on stage at the First Global Challenge, a competition in which teams from around the world maneuver a robot to collect and sort balls.

The Afghan girls, ages 14-16, were fittingly the last team to take their place. Minutes before the competition began, a cable on their robot failed. The girls nervously raced to replace it. Then they joined teams from Estonia and Gabon to compete against Barbados, the Dominican Republic and Ghana.

The broken cable was the last of many obstacles the girls overcame. The team became a media sensation after its members had their visa applications rejected twice. A half-dozen TV cameras filmed from the bleachers at DAR Constitution Hall, a couple blocks from the White House. The team could only make the trip after President Trump intervened at the last second.

From the second they signed up for the competition, they encountered adversity. First, the materials for their robot were held up in customs on their way to Afghanistan. They finally arrived, leaving the girls only two weeks to build their robot, far less than other teams.

But they persevered, under the guidance of Roya Mahboob, the CEO of Digital Citizen Fund, a nonprofit that gives girls in the developing world access to technology.

Mahboob, who organized the team, told CNN Tech she’s a believer in technology’s ability to create opportunities for women.

“For many of these girls, their life is already defined by family, the community and society. They have to marry, they have to stay at home, they have to raise the kids,” Mahboob said. “This environment of working together to solve robotics problems gives them the feeling that they can do something much greater.”

Mahboob points to her own life as proof of technology’s impact on women. She grew up in Iran, an Afghan refugee. As a teenager she returned to her native country, and later started an IT company there. Mahboob said technology freed her from borders and culture. She found her investors outside Afghanistan and now lives in New York.

“We want to tell the men in our society that women can make it if you give them opportunity and the tools,” Mahboob said. “This changes their family’s view later on. They say, ‘wow,’ because this was always for the boys and the men.”

The six girls have since taken up Mahboob’s mission.

“We want to be a good example for girls,” said Rodaba Noori, one team member. “We want to make our country a better place to live, work and get an education.”

While their journey was about a lot more than being the best at sorting blue and red plastic balls, they’ve proven good at that too. Along with Estonia and Gabon, they beat Barbados, the Dominican Republic and Ghaha in their opening match Monday. The competition wraps up Tuesday afternoon.