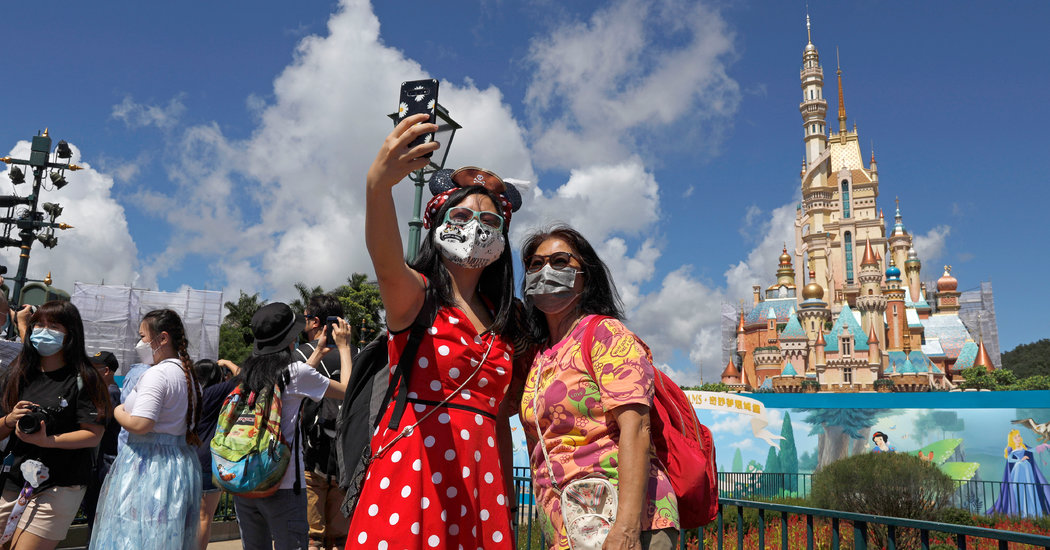 Hong Kong Disneyland will close again on Wednesday to comply with a government-directed rollback of public activities in the region after an increase in coronavirus infections, the Walt Disney Company said on Monday. Disney called the closing of the theme park “temporary” and said its resort hotels at the Lantau Island complex would remain open.

With attendance of 6.5 million last year and an estimated 5,000 employees, Hong Kong Disneyland is the smallest park in Disney’s portfolio. Shutting it down again means little for the company’s bottom line. In fact, the theme park and resort hotel property has lost money for the last five years. Losses totaled about $13.5 million last year. Pro-democracy demonstrations in the city have resulted in a sharp decline in tourism.

But it is re-closing at a highly awkward time for Disney. Over the weekend, Disney executives in Florida cited the smooth reopening of Hong Kong Disneyland and other Disney parks in Asia as evidence that the company’s largest resort, Walt Disney World, could reopen safely, even as coronavirus cases in Florida surge to alarming levels. On Monday, Florida officials reported 12,624 new infections, one of the largest daily jumps in the state since the pandemic began.

Hong Kong Disneyland, 53 percent of which is owned by the local government (with Disney controlling the balance), initially closed because of the virus on Jan. 26. It reopened on June 18 with limited capacity and other safety measures, including temperature checks for visitors and employees. The 14-year-old complex includes three hotels with more than 1,700 total rooms. Attendance has been very light since it reopened.

Disneyland Paris is scheduled to reopen on Wednesday.

Disney also plans to reopen two more Florida theme parks, Epcot and Hollywood Studios, on Wednesday, a decision that has been greeted by enthusiasm from many fans and extreme dismay by others, including some Disney workers. Disney World, which attracted more than 50 million visitors last year, has recalled roughly 20,000 furloughed union employees for its phased reopening, which includes an array of safety protocols.

“Covid is here, and we have a responsibility to figure out the best approach to safely operate in this new normal,” Josh D’Amaro, Disney’s theme park chairman, said in an interview last week. “Businesses across the country are open, whether it’s a local pizza shop in Orlando or an airline taking on new guests.”

But authorities in California have slowed down the entertainment company’s plan to reopen the Disneyland Resort in Anaheim. After an increase in coronavirus cases in California and an outcry from some Disneyland workers about safety, Gov. Gavin Newsom made it clear that he would not give theme parks in the state a green light to reopen in time for Disneyland to come back online this Friday, as Disney had hoped.

No new timeline has been given.