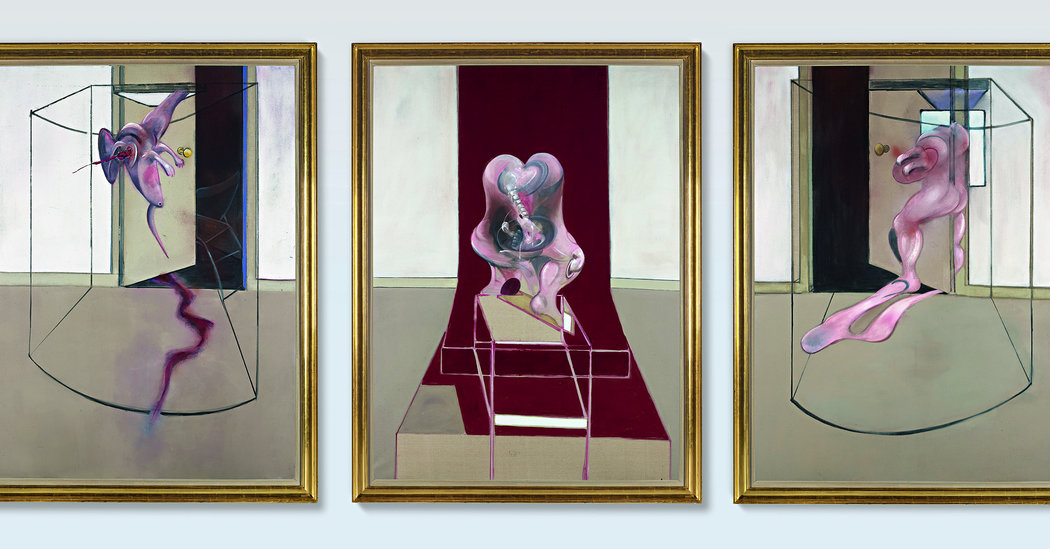 LONDON — A Francis Bacon triptych sold tonight for $84.6 million with fees at Sotheby’s inaugural digitally streamed “live” auction of contemporary and Impressionist art that replaced its postponed May evening sales in New York. A global online audience watched the company’s star auctioneer, Oliver Barker, take bids from international colleagues on screens in an empty salesroom in London specially adapted for the coronavirus pandemic.

After a 10 minute duel, the Bacon was finally bought by a telephone bidder in New York against determined competition from an online opponent. The price is the third-highest ever achieved for the artist at auction.

The celebrated British artist’s “Triptych Inspired by the Oresteia of Aeschylus” (1981), was being sold by the Astrup Fearnley Museet, a private museum in Oslo founded by the Norwegian collector Hans Rasmus Astrup. Entered for the auction before the coronavirus lockdown, the Bacon had been guaranteed by Sotheby’s to sell for at least $60 million, making it the most valuable work so far offered at auction this year. The pandemic has made wealthy owners wary of selling trophy pieces.

“It’s a bit late, but it’s an important work from a good collection,” James Holland-Hibbert, a leading London-based dealer in 20th century British art, said of the triptych by Bacon, whose most prized works date from the 1950s, ’60s and ’70s. The presale estimate of $60 million was “not unreasonable,” given that the museum had previously tried to sell the work privately for more than $100 million, Mr. Holland-Hibbert said. “It was not entirely fresh to the market.”

Bacon’s characteristic depiction of three animal-like figures in claustrophobic interiors was the first large-scale triptych to have appeared on the auction market since 2014. A year earlier, the artist’s 1969 triptych, “Three Studies of Lucian Freud,” had sold for a record $142.4 million, at the time the highest price ever paid for an artwork at auction.