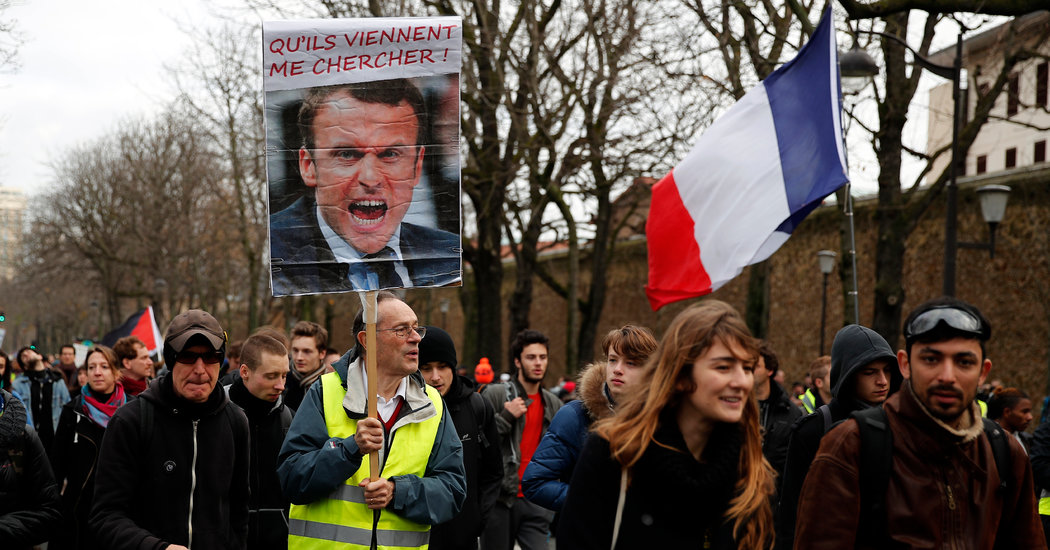 PARIS — One protest movement started a year ago in France and drew hundreds of thousands at its peak to roundabouts across the country in angry “Yellow Vest” demonstrations against planned increases in gas taxes.

Another — a nationwide strike expressing fury over President Emmanuel Macron’s plans to overhaul the pension system — began this past week. On Saturday, it continued to paralyze parts of the country.

Even as the strength of the long-running Yellow Vest protests has dissipated over the year, the movement’s simmering anger at the president has run smack dab this weekend into the latest turmoil over his pension plans.

Both events have harnessed broader discontent with the policies of Mr. Macron, who is viewed both by both Yellow Vests and labor activists as arrogant and disconnected from their daily struggles. At their most violent, the Yellow Vest protests saw people break shop windows, the police fire tear gas and rubber bullets and Mr. Macron consider a state of emergency.

More Yellow Vest rallies were expected in Paris and other cities on Saturday, and so were traditional union demonstrations against unemployment. But the size and impact of both are uncertain. And though neither is directly tied to the pension demonstrations, both could get a boost from the latest social unrest.

On Saturday, about a thousand Yellow Vest protesters marched from the Economy Ministry to southern Paris. The demonstration was mostly calm, despite brief scuffles with the police, who fired tear gas. A separate union protest gathered in the Montparnasse neighborhood, while labor activists also demonstrated in cities like Marseille and Caen.

There is little sign of any coordination among any of those causes: The Yellow Vests — named for the fluorescent emergency gear that all French drivers must have in their vehicles — are largely leaderless and the union rallies are held annually on the first Saturday of December.

But the pension fight has given new energy to both movements, and some Yellow Vests took part in this past week’s labor marches, a stark contrast to last year, when they rejected unions as inefficient and archaic.

And the government was gearing up for more protests in the coming week. Labor unions have called for huge street demonstrations on Tuesday, the day before Prime Minister Édouard Philippe is expected to unveil fresh details of the pension plans.

Mr. Macron has promised to standardize 42 public and private pension schemes into one state-managed, point-based plan. But for many protesters, nothing less than the future of their vaunted social safety net is at stake. Many fear losing money and having to work longer before retiring.

The protests have already unleashed days of public transportation chaos that halted trains and led to canceled flights.

On Saturday, the impact of the continuing strike was limited, since weekday workers did not have to commute. But train traffic was still heavily disrupted across France, and some businesses have started expressing worries that the strike could affect Christmas shopping.

“This new movement and the risk of continuing strikes are a further hard blow for shopkeepers who were already seriously affected by one year of the Yellow Vest movement,” said Yohann Petiot, the head of the Alliance du Commerce trade group, in a statement.

Only one in six scheduled high-speed trains was running, and in Paris, nine out of 16 metro lines remained shut down. Unrelated protests by truck drivers over fuel tax hikes worsened the disruptions, as trucks were used to block highways and tollbooths, slowing traffic to a crawl in places like Normandy and the Toulouse region.

France’s national railway company, S.N.C.F., warned residents of Paris and its suburbs that crowds at some regional express stations on Monday could be “dangerous” because there were expected to be five times fewer commuter trains.

“S.N.C.F. is asking those who can to cancel their trips,” the company said on Twitter.

Labor unions, expecting a protracted struggle against the government, have activated strike funds to mitigate the loss of income for striking workers. Some supporters of the protesters have also started fund-raising campaigns.

One was even started on Twitch, the video game streaming platform, where a collective of streamers and artists have vowed to keep broadcasting games, artwork and political discussions as long as the strike continued.

“It is not always possible to take to the streets or to go on strike,” the collective said on the website for the project. It added that it was important to “invent new spaces for mobilization and other ways of accompanying the movement.” (The French government has had similar ideas.)

Mr. Philippe lamented in a televised address on Friday the spread of “fake news” about the pension overhaul.

He specifically blamed a number of “simulators” that some unions have put online to show people how they would be affected by the changes, under which workers would accumulate points over the course of their careers and cash them in when they retire. Noting that the details of the plan had yet to be unveiled, he said that such simulators “correspond to nothing.”

But the lack of clarity from the government has left many people in France fearful that their pensions will be diminished.

Jean-Luc Mélenchon, the leader of the far-left France Unbowed party, said on Saturday that the “real problem” for French workers was that they retired “too late” and “too poor.”

“We have three days left to put the maximum amount of pressure so that it gives up on the idea of a point-based retirement system,” Mr. Mélenchon, speaking to reporters in Marseille, said of the government.