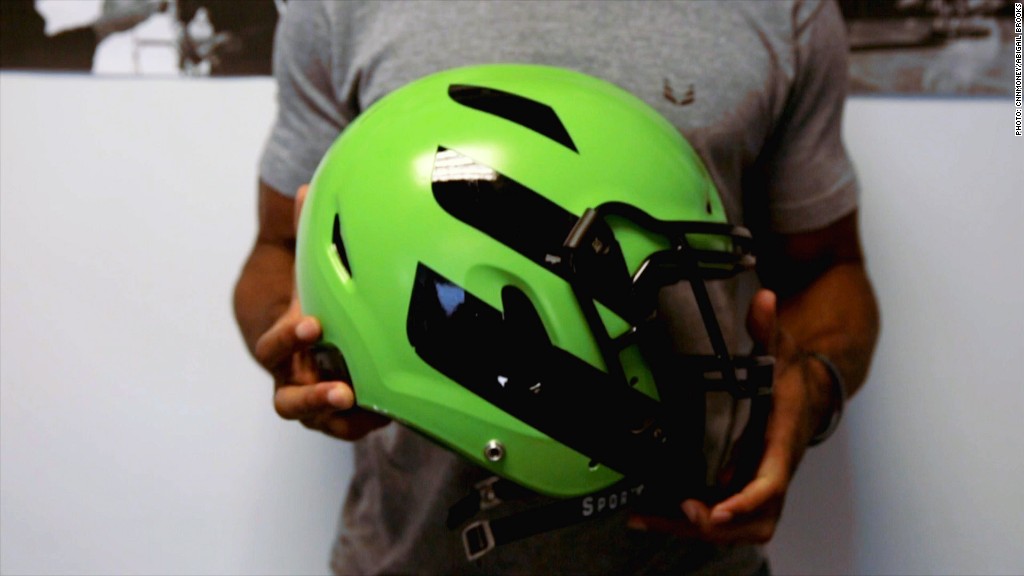 Head injuries have plagued the NFL for years. But the helmets that players wear have retained roughly the same design since the 1970s.

This season, about 70 NFL players are wearing a new helmet that’s a radical departure from previous iterations — and, the league believes, safer.

It won’t be easy to spot when you’re watching games on Sunday. The Vicis Zero1 looks a lot like other helmets. But it’s designed to soften the blows to the heads of NFL players.

The scientists, neurosurgeons and engineers who designed the helmet make clear that it won’t prevent concussions. No helmet will. Houston Texans linebacker Brian Cushing, who wears the Vicis helmet, suffered a concussion during his team’s first game of the season.

But the NFL and the NFL Players Association spent the last few years testing dozens of helmet concepts that could help protect players. Out of all the designs, the Vicis ranked highest in safety.

It works by offering four layers of protection. An outer layer compresses to absorb shock and then rebounds, the way a tennis ball deforms when it hits a solid surface and then returns to shape.

Below that is a layer of polymer columns that move in different directions to absorb shock and reduce force. A hard inner shell helps prevent skull fractures and brain bleeds. And a layer of memory foam provides comfort.

That makes the Vicis helmet, which sells for $1,500, markedly different from other helmets, most of which consist of a single layer of foam cushioning inside a hard plastic shell. Other models tested alongside the Vicis by the NFL and NFLPA feature these outer shells and various levels of cushioning.

About half of NFL teams placed orders for their players. (Individual players, not teams, decide which helmets to wear.) Players from the Seattle Seahawks, Kansas City Chiefs and Houston Texans are early adopters.

Jadeveon Clowney of the Houston Texans and Alex Smith of the Kansas City Chiefs will sport the new headgear this season. From the Seattle Seahawks, Russell Wilson, Richard Sherman and Doug Baldwin, who is also an investor in the company, will wear it, too.

“You don’t feel the thuds as hard as they normally are,” said Seahawks defensive end Cliff Avril, who is wearing the Vicis.

Chiefs center Mitch Morse said he’s “always looking to be progressive, especially regarding brain function and health, so for me, it was a pretty easy switch to make.”

The NFL and the broader sport have faced intense scrutiny over concussions.

Medical experts, players and parents are concerned that repeated concussions increase the risk of a degenerative disease called chronic traumatic encephalopathy, or CTE.

A recent study published in the Journal of the American Medical Association found CTE in 99% of the brains of deceased NFL players donated to scientific research.

The NFL has invested in preventing, diagnosing and treating head injuries. Last year it announced a $100 million concussion initiative aimed at making the game safer. The first $40 million was made available in August.

The league also launched the Head Health Challenge, a competition to encourage companies to study and develop products to improve player safety. Vicis was one of the winners and received a round of funding from the NFL. It has since raised $30 million on its own.

An NFL spokesperson told CNNMoney the league is “optimistic” that the Vicis helmet will be “the first of many novel developments as we continue to stimulate research and innovation.”

In college football, players from Notre Dame, Middle Tennessee State and Michigan State plan to use the helmet this season.

The company also wants to sell it to children and high schoolers. It will be available online starting this fall. Vicis isn’t saying what it will charge, only that the helmet will be cheaper than $1,500. It also plans to offer discounts.

Vicis cofounder and pediatric neurosurgeon Sam Browd said he doesn’t want cost to keep any kid from using one.

“There’s certainly going to be communities out there where a helmet, no matter what price point we come in at, is going to be maybe too expensive,” he said. “Whatever kids feel like they want to be in our helmet, and would think our helmet’s safer, I’m going to make sure that they get the helmet.”