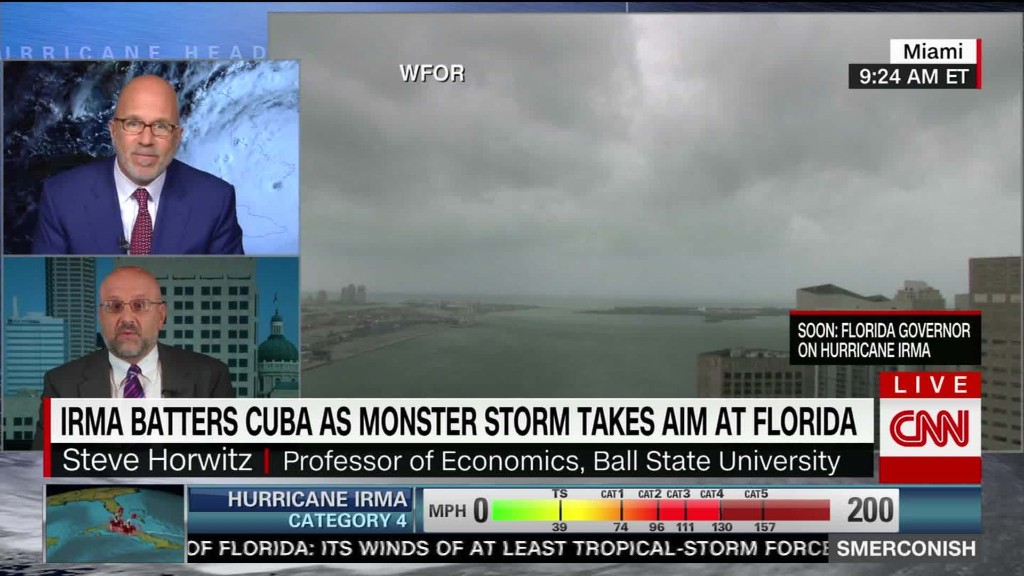 Hurricane Irma may not hurt the U.S. economy as initially feared. And investors seem less concerned about a man-made disaster, i.e. North Korea launching nuclear weapons, as well. Add that up, and you get a solid market rally Monday.

While Irma, now a tropical storm, did cause extensive damage in Florida, it could have been a lot worse.

Property and casualty insurance company Travelers (TRV) led the Dow’s gains, rising nearly 3%. That seems to be a sign that investors are breathing a sigh of relief about lower estimates for economic damage caused by both Irma and Hurricane Harvey, which slammed the Gulf Coast of Texas last month.

Home Depot (HD), on the other hand, was one of the few Dow stocks in the red Monday.

Shares fell more than 1% as Wall Street appeared to bet that the retailer won’t get as big a bump in sales as first thought from Floridians looking to repair their houses. Home Depot rival Lowe’s (LOW) dropped nearly 2% as well.

But Irma wasn’t the only story impacting the markets. Tech stocks helped lead the bull run, with Apple (AAPL, Tech30) gaining 2% ahead of its new iPhone announcement Tuesday.

And some market watchers felt that the diminished concerns about military conflict in Asia are really what drove the rally Monday.

“We are all happy that Irma isn’t as bad as we thought. But when you look at why we’ve sold off lately, it’s North Korea,” said JJ Kinahan, chief market strategist with TD Ameritrade.

Kinahan thinks the lack of any significantly new saber rattling from North Korea’s leader Kim Jong Un is causing investors to breathe a sigh of relief.

Take a look at other parts of the market beyond the Dow and you’ll clearly see fewer signs of investor anxiety.

Gold prices fell 1% Monday. Gold is a tangible asset that investors often rely on when they are nervous — particularly about geopolitical concerns. The price of gold recently rose to a one-year high.

The yield on the benchmark 10-year U.S. Treasury, which got close to 2% a week ago on worries about North Korea, perked back up to above 2.1% Monday. That may not sound like a huge move, but it is in the sleepier world of bonds.

What’s more, yields go up when fixed income investors are selling bonds. So the rise in bond yields could be yet another sign that investors were fleeing more secure assets to buy riskier stocks.

Related: Florida’s economy will get hit by Irma

In fact, the safe haven component of CNNMoney’s Fear & Greed Index, which looks at seven indicators of market sentiment, is in “extreme greed” territory since stocks have done much better than bonds lately. Investors apparently feel no need to flock to safety.

And the VIX (VIX), a measure of volatility that is another indicator in the Fear & Greed Index, fell more than 10% Monday. The VIX goes down when investors have less to worry about.

To that end, the Fear & Greed Index shot back up to “neutral” levels Monday. It was in “fear” territory heading into the weekend on Friday.

Mark Hackett, chief of investment research at Nationwide, wrote in a commentary Monday that it is encouraging to see investors react this way.

“A glass half-full approach from equity investors, where bad news does not hit markets and the positive resolution to the feared bad news rallies markets is bullish,” he wrote.

In other words, investors haven’t been panicking when the headlines are scary. But they rejoice when the news is good.