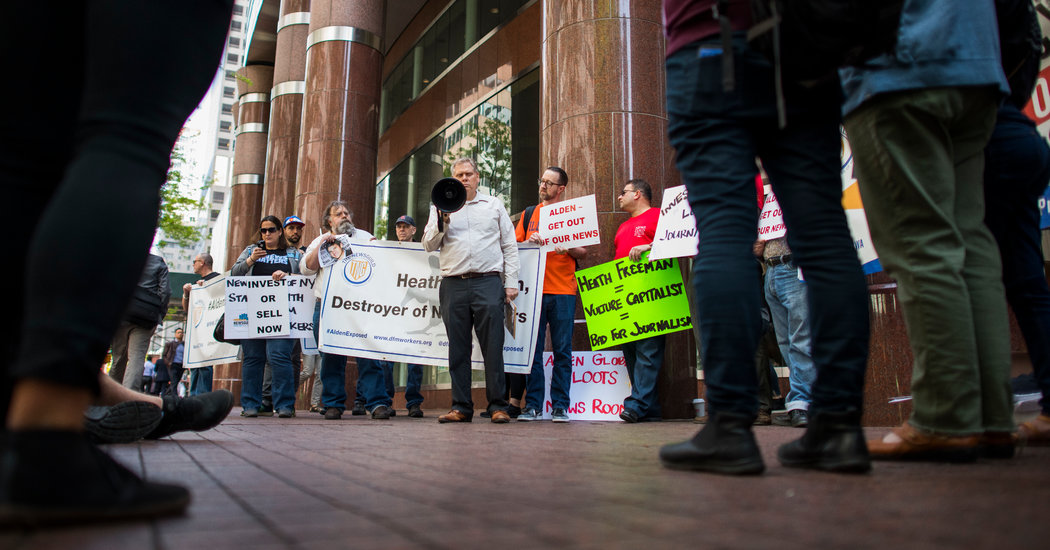 Noelle Phillips, a reporter for The Denver Post, was among the journalists who took part in a protest against the newspaper’s hedge-fund owner in Midtown Manhattan on Tuesday. Along with a dozen other sign-wielding protesters from newspapers across the country, Ms. Phillips chanted slogans outside the Lipstick Building, where Alden Global Capital, the company behind the newspaper chain Digital First Media, has its headquarters.

“As a reporter, what do you do when someone won’t answer your questions?” she said. “You go knock on their door.”

Journalists at The Post have taken the lead in making public their displeasure with Alden and Digital First Media, the owner of more than 90 publications nationwide, including The Orange County Register, The Pioneer Press of St. Paul and The Mercury News of San Jose, Calif.

Alden runs the newspapers at a high profit margin while cutting costs significantly, often through layoffs, and the Denver crew has lost patience. In its April 8 issue, The Post published a six-page opinion section critical of management.

“If Alden isn’t willing to do good journalism here,” the lead editorial said, “it should sell The Post to owners who will.”

Last week, the editor behind the section, Chuck Plunkett, resigned after a company executive barred him from publishing a follow-up editorial in the same vein. After his resignation, 55 newsroom employees signed a letter blasting ownership for blocking the editorial.

Nine newsroom employees from other Alden newspapers joined four Post journalists at the Midtown protest. They said they had tried in recent months to persuade the hedge fund’s president, Heath Freeman, or its founder, Randall D. Smith, to explain the company’s vision for its newspapers.

“We would have hoped that they would have come down and addressed this group of journalists who are here out of concern for our communities and the journalism that protects them,” said Patricia Doxsey, a reporter for The Daily Freeman, an Alden-owned newspaper in Kingston, N.Y. “But we’re not surprised.”

When Alden assumed ownership of The Post in 2010, after acquiring its bankrupt parent company, MediaNews Group, the newsroom had roughly 200 employees. Now, after rounds of layoffs, it has fewer than 100, and the company has ordered that 30 more newsroom jobs be cut by July.

Alden did not immediately respond to a request for comment.

The protest was organized by the NewsGuild-CWA union, which covered travel expenses and hotel accommodations for the participants. The union also enacted a digital strategy: Certain Google searches of Alden executives’ names turned up a top-of-the-screen advertisement that said, “Randall Smith & Heath Freeman | They’re Harming Our Democracy.”

Elizabeth Hernandez, a Post reporter, said that taking a public stance against her bosses was not what she had in mind when she began her career in 2014. But there she was at the end of the protest, holding a rolled-up banner and wearing a pin on her T-shirt that read, “I am a certified pest.”

“I don’t like being the story,” Ms. Hernandez said. “But if we don’t tell our own story now, I don’t know how long we’ll able to tell our community’s.”