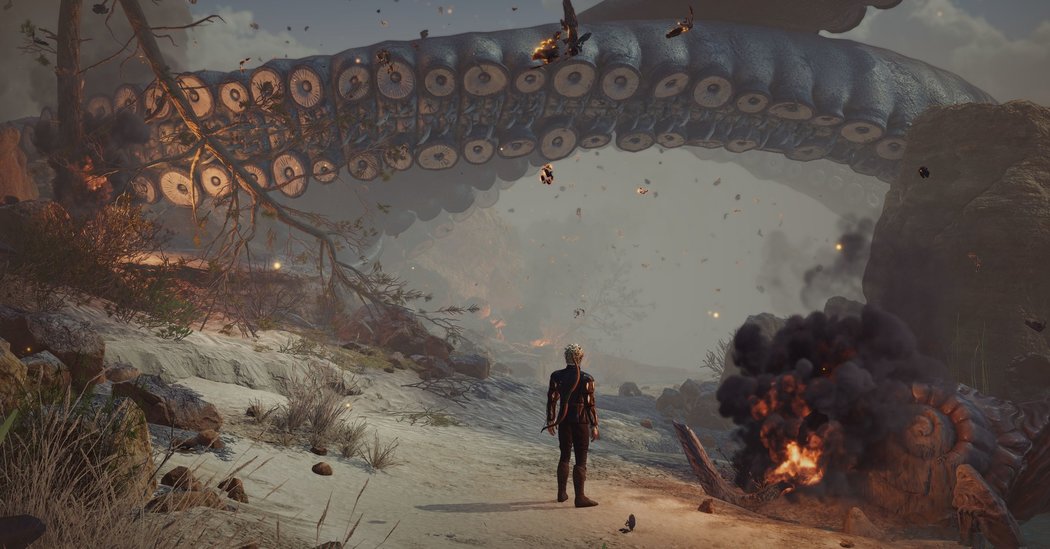 During the early days of self-quarantine at Larian Studios, the independent video game developer founded in Ghent, Belgium, morale remained high. Designers and engineers, many of whom worked remotely (the company has 300 employees across five countries), were able to continue to do so, building levels and writing code from their homes.

“The very first week, it went really well,” said Swen Vincke, the chief executive at Larian, which makes popular role-playing games like Divinity: Original Sin and the upcoming Baldur’s Gate 3. “Everyone had all the information they needed to just smoothly go work from home.”

But as the company entered the second and third weeks of social isolation amid the coronavirus pandemic, problems began to emerge. Parents have to work while caring for young children. Some employees have found themselves working limited or unusual hours, which has led to reduced productivity and communication struggles. And with Larian’s external partners closing or transitioning to remote work, everything has slowed down.

“We started seeing more stress on the leads in terms of communication,” Mr. Vincke said. “We’d spend all of our days just communicating — trying to solve problems, organize things, give direction.”

Video games might seem to be the perfect business for this new reality, in which most of the world has asked citizens to self-isolate in hopes of combating the pandemic. Bored and restless at home, people are taking solace in games.

The shooter game Doom Eternal, released in mid-March, had the best sales weekend of any game in the series. Animal Crossing, a simulation in which the player can create an idyllic existence by building homes and selling turnips, has broken sales records and become a cultural phenomenon. ESPN is showing e-sports, and video game streaming sites are bringing in massive viewerships: From the fourth quarter of 2019 to the first quarter of 2020, the streaming platform Twitch exceeded three billion hours watched for the first time, according to a report from the software service Streamlabs.

“Gaming is one of those areas that people are diverting to from other activities that they would have done in a normal world,” said Mat Piscatella, an analyst at the N.P.D. Group, which tracks the sales of video games. “The game sales that are coming out are breaking franchise records.”

Yet video game developers, as well as the large corporations behind the gaming consoles, have faced challenges adapting to a world in which offices and factories are closed and designers have children vying for their attention at home. Behind the scenes, questions linger as to how to tackle a crisis that could last weeks or months — particularly for those making games and gaming consoles that they hoped to release this year.

Sony, the publisher of PlayStation consoles and dozens of video games, said in early April that it would be delaying the much-anticipated The Last of Us: Part II from May 29 to an undetermined date. Developers at Naughty Dog, the studio behind the game, said the delay was because of the current challenges of printing, shipping and selling physical copies of video games. With factories closed, distribution pipelines disrupted and the retailer GameStop operating at reduced capacity, Sony worried that physical sales would be diminished.

Sony isn’t alone. Amazon delayed its multiplayer game New World from spring to August “in order to reach our quality bar as we work remotely for the foreseeable future,” the company said in a statement. The publisher Square Enix had to delay a big new update for its online game Final Fantasy XIV. The Microsoft-owned post-apocalyptic role-playing game Wasteland 3 was bumped from May 19 to Aug. 28, with its developers citing “these new logistical challenges” in their explanation.

Other big companies have found it easier to adapt. Ubisoft, the multinational publisher of games like Far Cry and Assassin’s Creed, has 17,000 employees at 55 studios who could be moved from project to project as different countries faced lockdown orders.

“We shifted some of our quality assurance and testing work from India to China while our studio in Pune was transitioning to working from home,” said Yves Guillemot, Ubisoft’s chief executive. “We also learned a lot from our studios in China, who had to deal with this first and shared their best practices and experiences with us.”

Forrest Dowling, the president of the Molasses Flood, a Boston-based independent studio, said he still hoped to release his new multiplayer building game, Drake Hollow, in June. Because the game is digital-only, Mr. Dowling’s company has more flexibility. “We are figuring it out on a week-by-week basis at the moment,” he said.

But Mr. Dowling said he was concerned about keeping his staff happy and productive in these extraordinary circumstances. He compared working during the pandemic to “crunch”: lengthy periods of extended overtime, which are ubiquitous in the video game industry.

“I think this is going to burn people out,” Mr. Dowling said. “From an energy focus standpoint, it feels very similar to times that I crunched.”

Canceled or delayed events have also thrown roadblocks in the way of releases. Mr. Dowling had planned to show Drake Hollow at the Game Developers Conference, an annual March event in San Francisco, but it was canceled, costing the game potential media coverage. Big game publishers are still scrambling to figure out replacement plans for E3, the video game convention held each June, in which big new games are announced and showcased.

Developers who relied on these events to strike marketing deals or find financing for their games now find themselves facing ruinous consequences. Jukka Laakso, the chief executive of the Finland-based studio Rival Games, wrote in a blog post on April 10 that he was shutting down his company. The studio had already been struggling, he said, but the pandemic “shut down all the leads that we had and left us lost in the dark with no way out.”

Josh Regan, an independent game developer who is scheduled to release a strategy game called Warborn, on June 12, said he grew nervous when he saw the delays of The Last of Us: Part II and other big games.

“I have a suspicion this might mean more visibility is available to indies, but I think lower disposable income is going to be a concern for everyone,” Mr. Regan said. “Suffice to say, it feels very strange to be making games at a time like this.”

Mr. Regan, who is based in Bristol, England, added that he might have to delay the planned physical release of his game, releasing it only on digital platforms.

Another major logistical hurdle for video games in 2020 will be getting through certification, a process required by the three major console manufacturers, Nintendo, Microsoft and Sony. Before any developer can release a game on Switch, Xbox or PlayStation, those companies want to ensure that there are no game-breaking glitches.

But certification testers at those companies are now working remotely, which has raised questions about security and productivity. Developers worry that with everything taking longer than it normally does, a backlog may emerge.

Geneviève St-Onge is the co-founder of Popagenda, a company that helps small developers get their games out the door. Usually, she said, she recommends that her clients finish their games with a buffer of four to six weeks for certification time. Since the pandemic started, she’s been telling them to plan for eight to 10 weeks.

“We’re being extremely careful now,” Ms. St-Onge said. “We don’t know what the turnaround time is going to be.”

The hardest-hitting economic effect of the pandemic, though, may be on the release of new consoles from Sony and Microsoft, who have long planned to release the next PlayStation and Xbox this fall. Such events happen only every seven or eight years, to enormous attention and, the companies hope, acclaim.

Both Microsoft and Sony have said that their consoles remain on track, but internally, they continue to watch the clock.

“New games are what really keeps the market going,” said Mr. Piscatella of the N.P.D. Group. “If the consoles get delayed, that’s going to have an impact on what we’re seeing in the market, no question.”

Yves Guillemot of Ubisoft said that Microsoft and Sony had “made it possible for our developers to keep using their dev kits” — proprietary computer hardware that helps game makers develop games on consoles — “to continue creating our next-generation console games” even as the company’s staff works remotely, although he signaled a willingness to delay those games if the consoles miss their fall target.

“We are not seeing significant impact to our own timelines, but we are in touch with all our partners and if there’s a need to adjust in order to do what’s best for them and for our players, we will do so,” Mr. Guillemot said.

If global quarantining measures continue through the summer, delays for many of this fall’s games may be inevitable — except, perhaps, for those that release annually, like Call of Duty, which Activision has put out every fall since 2005, or EA’s Madden football video game series, a perpetual August release.

Two developers of video games planned for this fall, who spoke on condition of anonymity because they were not authorized to speak to the news media, said that so far, they had chosen to cut scope rather than delay their games. Because of slowdowns in productivity at their studios — and at outsourcing houses, particularly in China and India — they plan to cut features, levels and quests in hopes of making their deadlines.

But there are some aspects of game development that can’t be emulated from home, like performance capturing, an expensive process in which an actor stands on a sound stage and mimics character movements. Those actions are filmed and translated to animations that can be used in the game.

“We don’t have a solution for it,” said Mr. Vincke of Larian Studios, adding that he hoped to be able to get back in the performance capture studio soon alongside heavy disinfecting and social distancing policies. “We’re hoping that eventually we’re going to organize something.”

“We had one project in the middle of recording,” said John Ricciardi, a co-founder of 8-4 Ltd., a Tokyo-based localization company, which translates scripts. “And two or three lined up to be starting soon. The one that’s in the middle is just on pause. The other ones are delayed.”

Although voice actors can record from their homes, the sound can be inconsistent, Mr. Ricciardi said, especially if part of a game’s dialogue has already been recorded in the studio.

Mr. Vincke said that Larian’s next project, the highly anticipated role-playing game Baldur’s Gate 3, was still on track for an “early access” beta release this year. Larian’s internal estimates show that their teams are operating at 70 to 80 percent of their normal productivity, at least for now.