GRUNDY, Va. — Jay Rife surveys the landscape — hundreds of flat, grassy acres reclaimed from a spent mountaintop mine once operated by the Paramont Coal Company. A few handsome homes stand on one end of the project. An 80,000-square-foot shell, to house some future manufacturing operation, is being built on another. For the intrepid, there are trails for all-terrain vehicles. There’s an R.V. park. The whole site has been wired for broadband. Elk have been imported from Kentucky for tourists to look at.

Buchanan County, where Grundy sits, has spent $35 million to $40 million on the development, called Southern Gap, some seven miles from town along U.S. 460. Mr. Rife, the head of the county’s Industrial Development Authority, says the project “is going to be the salvation of Buchanan County.”

Few places have had as many shots at deliverance. None, so far, have succeeded in stemming Grundy’s inexorable decline.

This corner of southwestern Virginia has long sought alternatives to coal as a source of sustenance. The Appalachian School of Law, which opened in the 1990s in the shell of Grundy Junior High School, was heralded as a new economic engine, lubricated — of course — with taxpayer funds. So was the Appalachian College of Pharmacy, founded in 2003 some 20 minutes down the road in Oakwood. County officials considered a dental school, but figured it was too expensive. They still get grumpy about the optometry school, on which they spent $250,000 in feasibility studies only for it to open across the state line in Pikeville, Ky. Then there is downtown Grundy itself, much of which was moved up the hill to avoid periodic floodwaters from the Levisa Fork, a tributary of the Big Sandy River.

Virginia estimates that the relocation and flood-proofing projects, started almost 20 years ago, cost $170 million in federal and state funds, more than $170,000 for every woman, man and child living in town today. The Army Corps of Engineers shaved off the flank of a mountain across the river to create an elevated platform on which the new commercial district would sit. Virginia’s Department of Transportation bulldozed much of the old downtown and routed U.S. 460 through it, built on top of a levee protecting what was left of Grundy’s old center. Finally, in 2011, Walmart opened a superstore to anchor the new site, perched somewhat oddly above a two-story, publicly funded parking lot.

Today, a Subway and a Taco Bell are there, too, alongside a restaurant called El Sombrero, run by the only Mexican immigrants in town. There are a Shoe Sensation, a Verizon outlet and a Double Kwik gas station. Still, the effort does not quite amount to a reinvention. The economic engine is still the one that carried this corner of Appalachia through the 20th century. “We are a one-industry community, and that’s coal,” Mr. Rife said. A few steps from Walmart, an office of Welmore Energy, a coal-producing subsidiary of the Ukrainian steel conglomerate Metinvest, serves as a reminder of that dominance. 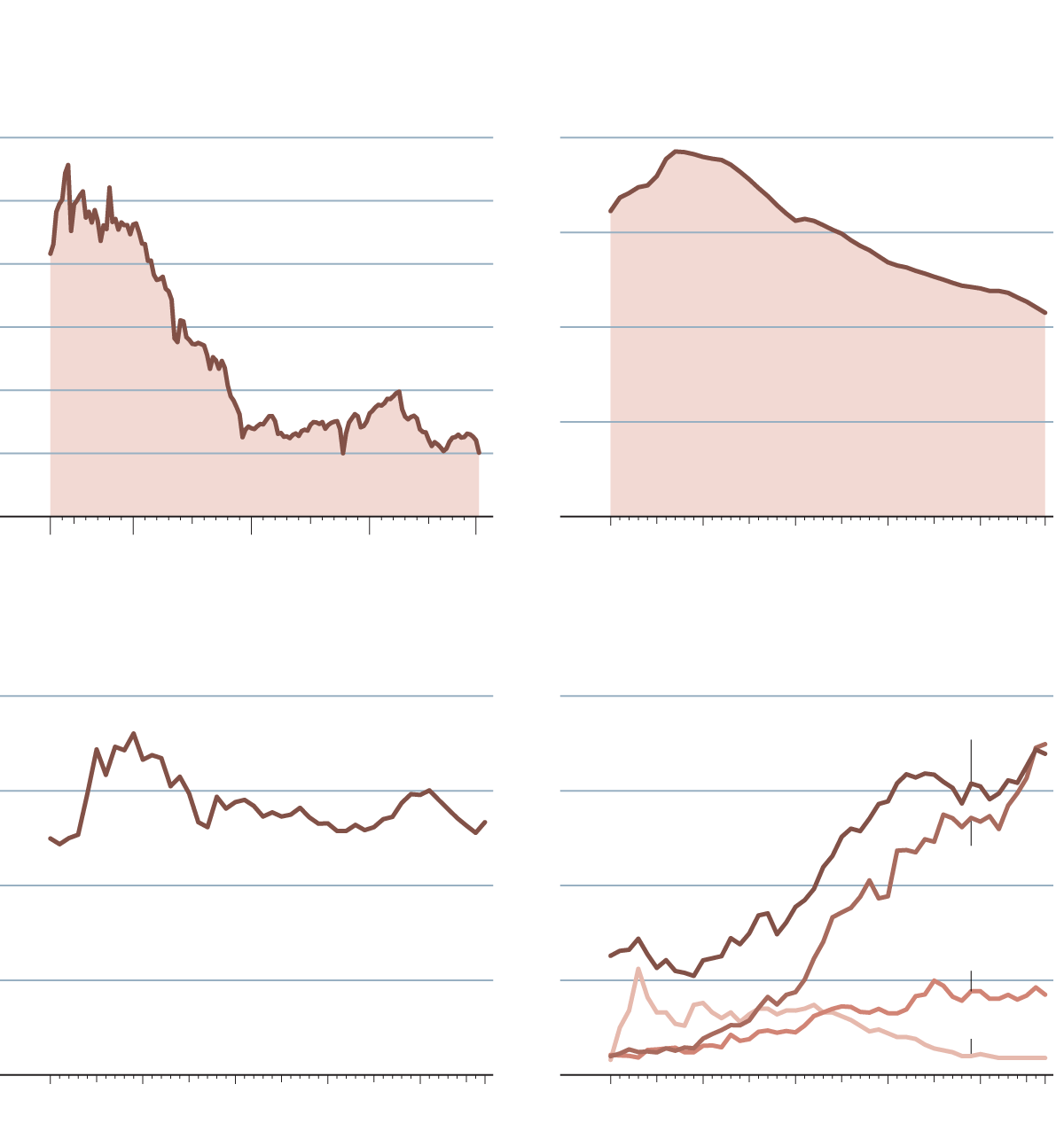 And that, today, is a problem. At the peak of coal’s fortunes in the 1970s, more than 35,000 people lived in Buchanan. Over 5,000 worked in the mines. Mr. Rife remembers downtown sidewalks in Grundy, the county seat, packed with thousands of people on weekend shopping expeditions. Karen Brown, the principal of Grundy High School, recalls Porsches and Mercedes-Benzes parked in the high school lot when she went to school there.

Coal is still the most prominent business, employing one in six workers in the county and accounting for one-third of its total wages. But it can no longer support such living standards. The income of Buchanan County’s residents has fallen to about two-thirds of the national average. And about 40 percent of that comes from federal transfers like Social Security.

The county population has declined to under 22,000, of whom almost 3,500 people receive disability benefits. Over a quarter live in poverty. And it is getting old. The only age group that has grown in the last two decades is the population over 55. Ms. Brown’s high school, which housed about 1,000 students when she was there, these days educates just a bit over 400. The county’s elementary and middle school population has shrunk by a fifth over the last 10 years, to under 2,000 students.

Grundy is hardly unique. It is one of many victims of globalization, technology and other economic dislocations that have wreaked havoc with small-town America. For years, most economists argued that rather than spend millions in pursuit of a new economic engine for such places, it would make more sense to help residents seek opportunities elsewhere.

But the proliferation of towns like Grundy across what used to be the nation’s industrial heartland — stymied by joblessness, awash in opioids and frustration — has prompted a new sense of alarm. At a recent conference organized by the Federal Reserve Bank of Boston, Lawrence H. Summers, once a top economic adviser to President Barack Obama, put it this way: “There is probably no issue more important for the political economy of the next 15 years, not just in the United States but around the world, than what happens in the areas that feel rightly that they are falling behind and increasingly left apart.”

Since the last industry peak, in 2012, the coal mines of Buchanan County have shed 1,000 jobs — roughly half. And they are not paying quite as well as they once did. Mikey Elswick estimates that 90 percent of his family has worked in the coal industry, including his father, his uncle and his brother-in-law. Still, he got out four years ago after Cambrian Coal bought the mine where he worked and said it would cut wages to around $20 an hour from $22.50. Luckily for him, the local exterminator was retiring and let him take over the business, including his roster of clients.

“There are not many jobs around here,” Mr. Elswick said. “Just teachers, state troopers and coal.” Cambrian Coal filed for bankruptcy in July.

Migration, as economists would have predicted, has become an increasingly compelling option: Those lucky enough to find work somewhere else leave. They include Ms. Brown’s two daughters — Peyton, 23, and Bailee, 25 — who last summer followed their husbands from the coal industry to more stable jobs at the Toyota plant in Georgetown, Ky.

“There are more restaurants, more shops, more like a downtown area, more traffic, more places to live,” Peyton said. While it will be tough to start a family so far from her parents, a three-and-a-half-hour drive away, she added, “it would not be wise for us to go back home.” The economics just don’t work.

Luckily, she already has a job, as a bank teller, and a community to rely on. “Friends that me and my husband went to high school with are down here already,” she said.

Brian Ward owns a small company he started, to provide crews and equipment to coal mines in the area, but has been forced into residential construction — remodeling, mostly — as coal has waned. Migration is not new, he said.

“We lost one generation of workers to Detroit, another to the Carolinas,” he said. These days, workers will go anywhere. “I don’t know where we are losing them to now,” Mr. Ward added.

Buchanan County is in some ways better off than other coal-mining regions. To be sure, its coal production has shriveled, virtually pushed out of the power market by the cheaper coal coming from the gargantuan open-top mines in the West since the 1980s. Automation has also taken out thousands of jobs.

But the county is bountiful in what’s known as metallurgical coal, used in steel making. Much of it is exported. This insulates local mines from the transition that power plants are making to natural gas. Indeed, coal jobs in the county experienced a bump starting in 2016, driven by exports to Europe and Asia. And while that has passed, as growth prospects overseas have dimmed, steel making guarantees some future for the region’s coal.

“We have been hoping and looking for infrastructure legislation,” said Harry Childress, president of the Virginia Coal and Energy Alliance in Lebanon, in the heart of coal territory 40 miles south of Grundy. “That could put steel production in the United States back online.”

Philanthropy from the McGlothlins, the Streets and the other baronial families that minted fortunes from Buchanan’s coal have helped fund projects in the area, including the law school and the college of pharmacy. Though dwindling, coal revenues can provide resources for the community’s diversification. Coal-related tax revenues, including property taxes and severance taxes imposed on the extraction of coal, are not what they once were. But they remain an important source of county funding. A share of severance taxes goes to the Virginia Coalfield Economic Development Authority, which funds Industrial Development Authority projects. The authority has funded broadband development in Buchanan County and a logistics and transportation center in Southern Gap.

Shannon Blevins, associate vice chancellor for economic development and engagement at the University of Virginia College at Wise, 60 miles from Grundy, says she is optimistic about the diversification initiatives in southwestern Virginia. She puts a lot of hope in the university’s computer-science and software-engineering graduates, who might draw the interest of high-tech firms worried about labor costs in bigger cities.

Tourism is another promising option. There are efforts to develop forest products and crops like hemp in the region, and even to identify abandoned coal mines that could house data centers, taking advantage of the low underground temperatures to keep them cool.

“This is a great time to invest in southwestern Virginia,” Ms. Blevins said.

And yet her optimism contrasts with the more jaundiced views of many residents. “There has been a ton of money spent in Buchanan County through grants,” said Mr. Ward, now in construction. “Not one penny has provided a replacement job for coal workers.”

He admits he doesn’t have good alternatives to their “pie-in-the-sky ideas,” but wonders, “How can you replace $30-an-hour jobs in the mines with mom-and-pops renting little cabins and paying $8 an hour?” His business has “not made any real money since 2011.”

The big call center on Southern Gap closed in September, cutting nearly 200 jobs. Mr. Ward is sure that 10 years from now, Walmart will have left Grundy.

Mr. Ward, 50, often shares breakfast with a rolling cast of septuagenarian veterans from the mines at the Dairy Queen on U.S. 460. There is Jim Hill, who left the mines to become a preacher in one of the county’s many Church of Christ congregations, remembering how in the old days people could retire from the mines with $1 million in their pocket. There is the guy they call “Honest Moe,” counting all the local businesses that have closed in the last few years. Together, they painted a complicated picture of the lives coal supported: dangerous but prosperous. Overwhelmingly, they support President Trump, who promised to bring coal back. But it doesn’t look as if they have much faith in the promise. As Hoot Dellinger said, leaning over the edge of his booth, “This community will never prosper again.”

Without prosperity, who will stay? “Ninety percent of the girls become nurses and leave,” Mr. Ward said. “We’ve seen a lot of guys chasing gas up in the Marcellus Shale.” But even moving doesn’t always work out. As shale jobs there have waned, Mr. Ward added, “a lot of them are trying to come back, and there’s nothing to come back to.”

Ms. Blevins acknowledges that the numbers can look bleak. But “people have to look beyond the numbers,” she said, and tease out the opportunities. “I want our region’s children to have the opportunity to stay.”