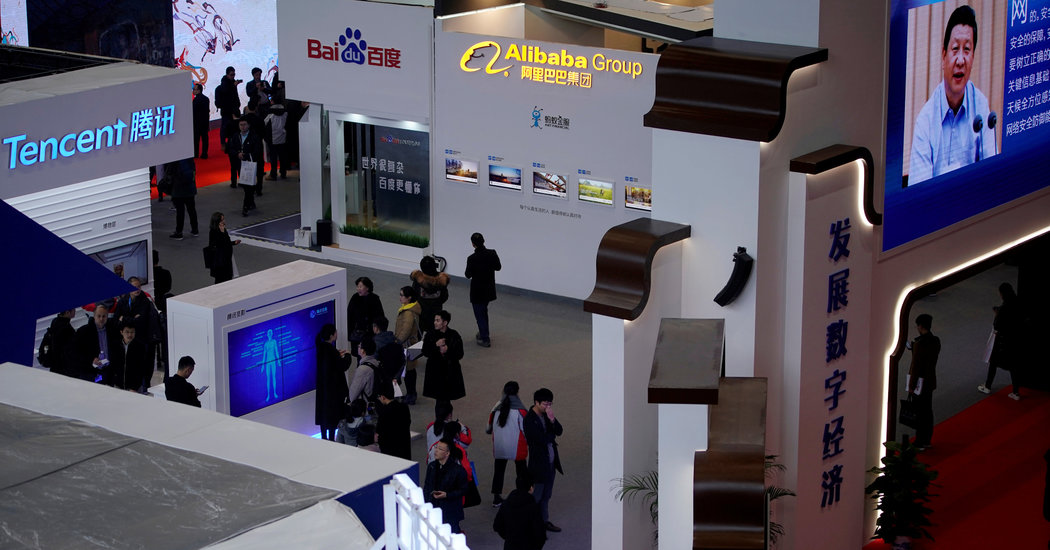 SHANGHAI — Its chat app has inspired Silicon Valley. It owns some of the biggest video game franchises in the world. And after years of growth it has become one of the largest internet companies in the world.

Yet on Wednesday, Tencent stumbled, missing earnings targets and posting a slowdown in profit growth for the first time in more than a decade.

As surprising as the slip up was the reason behind it: China’s government.

Bureaucratic reshuffling at the top levels of China’s government made it difficult for the company to get the licensing required to make money on new games, Tencent’s president, Martin Lau, explained on an earnings call. In a separate case, Chinese regulators pulled another game — Monster Hunter: World — because its content was deemed too gory.

“A lot of games have not been approved,” said Mr. Lau, adding that the government was aware “the restructuring is now affecting the industry as a whole.”

The admission was a rare acknowledgment of the outsize role China’s government can play in the fortunes, and misfortunes, of its most important private companies.

Abroad, the government of President Xi Jinping might appear to be a determined, strategic and well-financed champion of innovation and science, but its inefficiencies and restructuring are a major liability for the tech sector here.

Under Mr. Xi, Beijing has sought closer control over China’s largest internet companies, many of which were founded and grew large in the absence of Beijing oversight. While the goal has been in part to harness the creative capabilities of the companies, many Chinese tech executives fear the yoke of the government.

Excessive bureaucracy, heavy-handed censorship, and overreach into day-to-day management all come as downsides to a company having Beijing in its corner. For China’s largest companies, though, there is no choice. In a famed quote, Alibaba founder Jack Ma warned executives to strike a balance. Love the government, he advised, but don’t marry it.

An emblem of China’s growing innovative prowess, Tencent, which owns the messaging and payments app WeChat, has nonetheless been a beneficiary of Beijing’s policies. Government internet blocks have kept out would-be rivals like Facebook. Other plans that will bolster the company include a government initiative to turn WeChat into a form of digital national identification.

Still, attention from the central government in China has been a double-edged sword.

Last year Tencent was one of several private internet companies that had to inject funds into a struggling state telecom. Tencent’s hugely popular mobile game, Honor of Kings, also fell victim to regulations last year, over concerns that teens were spending too much time on it.

Holding up earnings this past quarter has been the company’s inability to make money in China off Player Unknown Battleground, or PUBG, a popular game that pits players against each other in a battle to the death on an island covered with weapons, vehicles and sniper nests. Tencent said it was working closely with regulators to get the license, which allows it to make money on the game, for instance by selling virtual items within the app.

Mr. Lau said that the company was working diligently to get the approvals. Ultimately the problem is a matter of the timing of the signoffs, not whether they will be acceptable, Mr. Lau added. Some have objected to the violence in PUBG, which is often played by devotees on smartphones, volume up on their phone speakers, in public places like trains and parks. Another game, Monster Hunter: World, was pulled entirely for its content, though Mr. Lau said the company was working to “adjust the content” so it could gain approval.

“The regulatory headwind is definitely having a toll” on Tencent’s gaming revenue, said John Choi, an analyst at Daiwa Capital Markets, noting that the company has not been able to monetize a key title such as PUBG.

Concerns about the competition and the increased regulatory oversight have weighed on the company’s share price for months. Its stock price has fallen almost 30 percent from peaks in January.

The company’s second quarter net profit fell 2 percent from the same period a year earlier to $2.7 billion. Its revenue in the period rose 30 percent, to $11.1 billion.